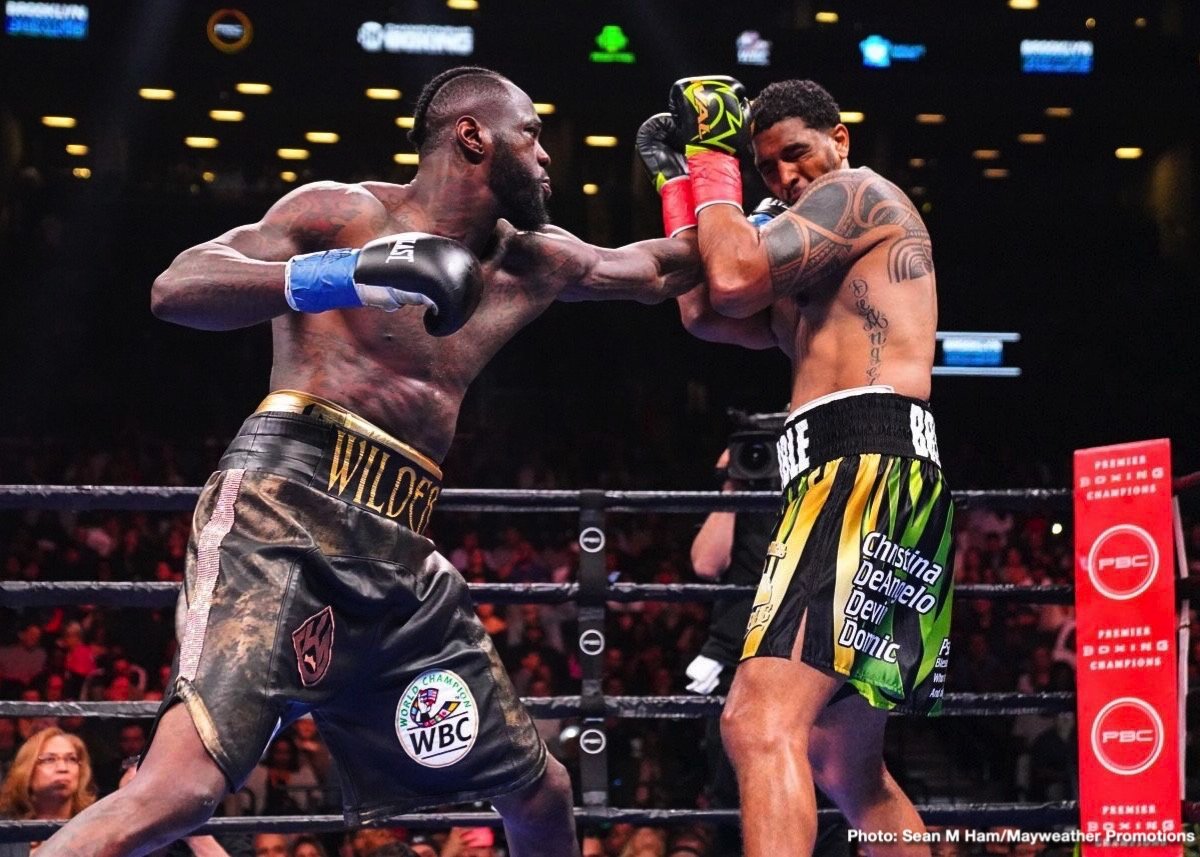 By Charles Brun: Anthony Joshua’s promoter Eddie Hearn has fired back at WBC heavyweight champion Deontay Wilder claiming that he’s using AJ’s name to get attention from boxing fans. Hearn says Joshua’s entire focus is on his upcoming December 7th rematch with Andy Ruiz Jr. in Saudi Arabia. Wilder is not in the picture right now.

Wilder (41-0-1, 40 KOs) actually didn’t single out Joshua (22-1, 21 KOs) in a recent interview with 78SPORTSTV. Deontay said he wanted Tyson Fury to step aside so that he can fight Andy Ruiz Jr., NOT Joshua. Hearn might not have understood that Wilder wants the Ruiz fight. It’s possible that Hearn doesn’t feel confident that Joshua will win the rematch with Ruiz on December 7.

If Hearn can keep Wilder out of the picture, he can angle for a trilogy match between Joshua and Ruiz. Joshua would absolutely need the third fight against Ruiz to try and save his career if he loses the rematch. It would also be a likely cash out for AJ in getting one last payday before hanging up his gloves with a third defeat to Ruiz Jr. There’s absolutely no way Joshua can move on from a second knockout loss to Ruiz without pushing for an immediate third fight. It would be a career-ender for Joshua if he doesn’t force Ruiz to fight him in an immediate third fight under those conditions. That’s why it’s important that Hearn keeps Wilder out of the picture.

“What a surprise on the global tour of Joshua vs Ruiz, Deontay Wilder is coming out talking about Anthony Joshua,” said Hearn to talksport.com. “Before the Ruiz fight, at the end of May, Deontay Wilder comes out and says, ‘I’m announcing my next fight, it’s Luis Ortiz.’ We’re now in September, he still hasn’t announced that date, he still hasn’t announced that venue. So this is him, again, just using Joshua’s name.”

Hearn made it clear that Joshua is going to focus 100% on his rematch with Ruiz Jr. on December 7. Eddie won’t let Joshua get caught up focusing on a Wilder fight again. The meaning here is that Joshua overlooked Ruiz the last time they fought on June 1 by focusing too much on a unification fight against Wilder. By blaming Wilder for Joshua’s loss, he’s giving his fighter AJ an excuse for why he was smashed by Ruiz Jr. in a 7th round knockout loss.

Fury won’t step aside to let Wilder fight Ruiz next

As far as Tyson Fury stepping aside to let Wilder face Ruiz in early 2020, it’s not happening.  Top Rank boss Bob Arum made it clear last Saturday that the Wilder vs. Fury fight is signed for February 22, and that’s going to happen. Arum thinks Fury will beat Wilder, and then he’ll be the one that will be facing the Joshua vs. Ruiz Jr. winner.

Given that Fury was basically knocked out in the 12th round by Wilder last December, it’s not likely that he’s going to defeat the American in the rematch. The odds of there being another referee that allows Fury to lay on the canvas motionless for five seconds without stopping the fight is low. There aren’t too many referees out there that won’t stop the fight when/if they see Fury that condition.