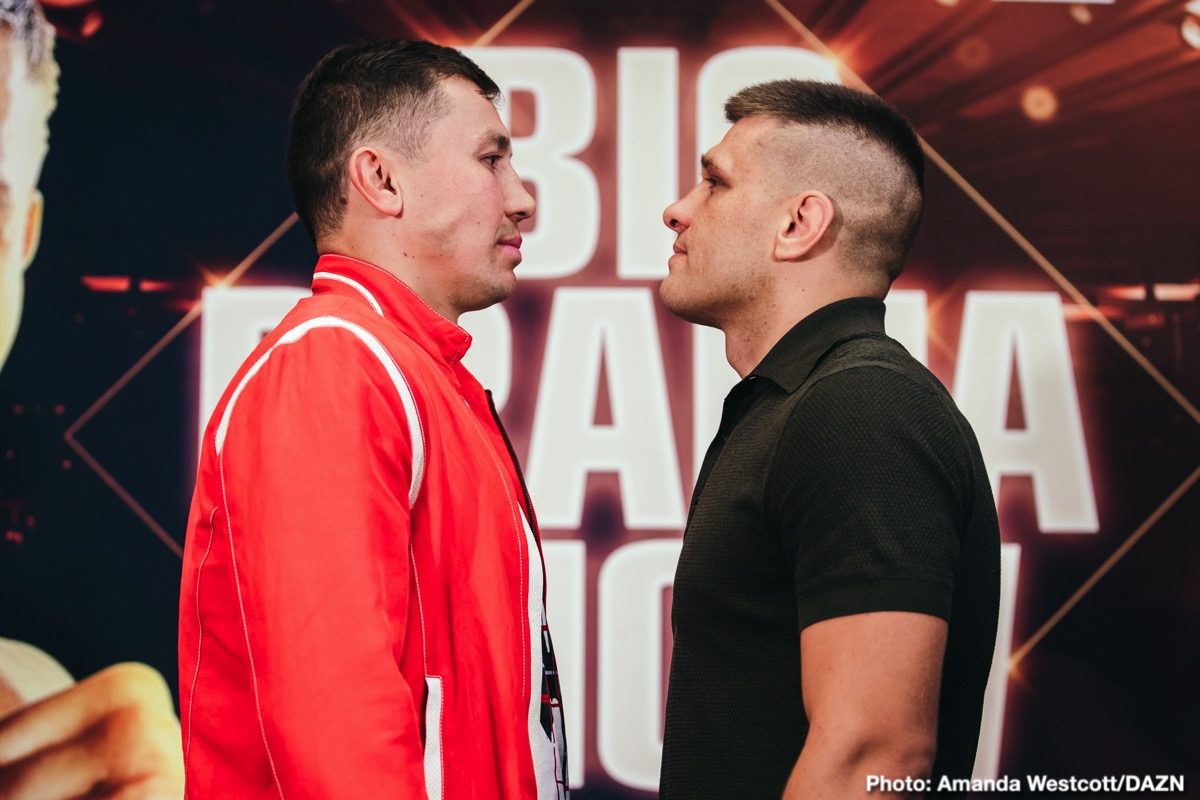 By Barry Holbrook: Gennady ‘GGG’ Golovkin is ready to bring his drama show back to Madison Square Garden in New York in less than two weeks from now against Sergiy Derevyanchenko on October 5 on DAZN. Golovkin-Derevyanchenko are competing for the vacant IBF middleweight title.

Golovkin (39-1-1, 35 KOs) will need to show more aggression early on against Derevyanchenko than he did in his last fight against Steve Rolls. It looked like GGG didn’t start fighting hard until the 4th round against the 35-year-old Rolls. Golovkin let Rolls hit him with big shots in rounds 1 through 3.

That title was supposed to have been the key to unlock the door for a trilogy fight for GGG against Saul Canelo Alvarez, but not anymore.

The Golden Boy star has made it clear that he will not be fighting Golovkin in a trilogy match, because he doesn’t view it as a challenge to face him again. Canelo says Golovkin “should take challenges” with his career the way he’s doing in facing Sergey Kovalev.

Unfortunately for Golovkin, he didn’t think of moving up to 175 to face former gym mate Kovalev for his WBO light heavyweight title. The thought of fighting Kovalev likely never crossed Golovkin’s mind. If Golovkin were to move up to 175 now, he would have to face one of the dangerous champions in Artur Beterbiev, Dmitry Bivol or Oleksandr Gvozdyk. Canelo steered around those guys to take on Kovalev.

Many fans see Derevyanchenko as easy fight for Golovkin

Golovkin vs. Derevyanchenko could turn out to be the fight of the year if both guys look to slug.

Canelo won the IBF belt from Jacobs last May, but then lost the title when Golden Boy was unable to setup a fight between him and IBF mandatory Derevyanchenko.

Canelo: Golovkin doesn’t represent a challenge for me

“For the same reason I am taking these challenges, I think he (Golovkin) should take these challenges in his career and we will see more ahead,” said Canelo in recommending that Golovkin take risks as well with his career. “But he has not taken any risk, and it really does not represent any challenge to fight him again. So I am doing this, taking big fights, big challenges for my career and the love of boxing,” said Canelo.

The Big Drama Show is only two weeks away. Will I see you at @TheGarden? pic.twitter.com/7rtKEK3t5W

Is Canelo Alvarez afraid of Golovkin?

The way Golovkin was able to hurt Canelo twice in their rematch, it’s possible that the Mexican star doesn’t want anymore of that work. Golovkin has a new trainer Johnathan Banks, who wants to to have him increase his punch output. Canelo looked like he was maxed out in both GGG fights with the shots that he was throwing. If Golovkin is able to increase his punch output by 20-30 shots per round, Canelo will have major problems dealing with those extra power shots coming his way.