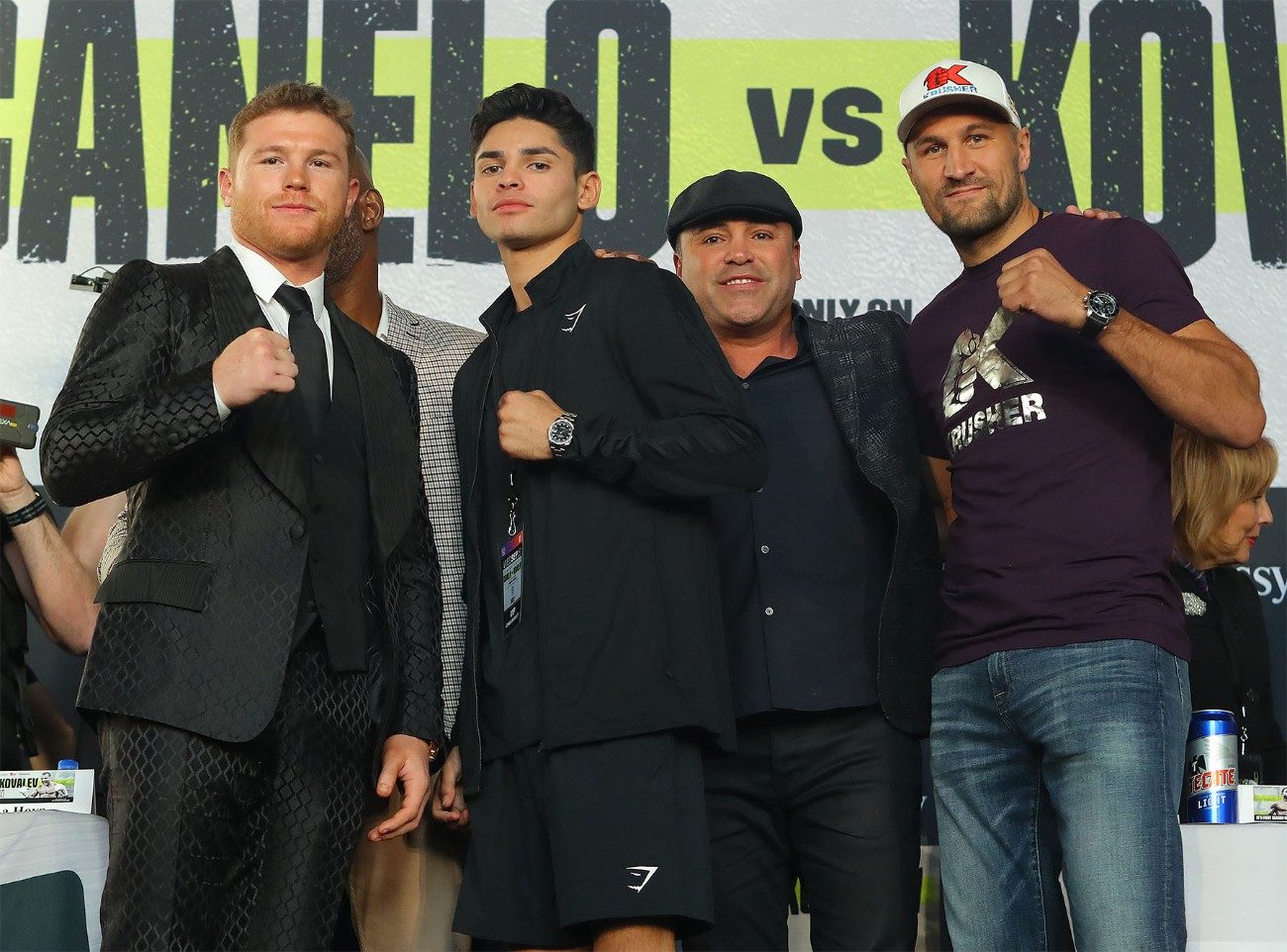 By Robert Addams: Oscar De La Hoya of Golden Boy Promotions says he’s hoping to get lightweight Ryan Garcia a $700 million deal that would be TWICE the amount Saul Canelo Alvarez got from DAZN. Alvarez (52-1-2, 35 KOs) was recently given a $360 million deal with the streaming giant.

Golden Boy Promotions announced a 5-year extension for the unbeaten Garcia (18-0, 15 KOs) on Wednesday, and revealed that he’ll be fighting Romero Duno (21-1, 16 KOs) in the co-main event on the Canelo vs. Sergey Kovalev undercard on November 2 on DAZN at the MGM Grand Garden Arena in Las Vegas, Nevada. Golden Boy and Garcia have fixed the problems they had recently, and everything is good between them once again. Whether things stay good between them is anyone’s guess.

Can Ryan Garcia get a $700 million contract?

De La Hoya told TMZ that he wants to make the 21-year-old Garcia “the biggest star that boxing has ever seen, hands down. Just like I got Canelo the biggest contract in sports history at the time, I can probably get DOUBLE for King Ryan when the time is right — when he becomes world champion — when he has several more years under his belt,” said De La Hoya.

For Garcia to get a huge $700 million contract like that, he’s going to need to at the minimum win a world title. More likely though, Garcia will have to prove himself over time as worthy of being paid that kind of money. Canelo didn’t get a $360 million contract with DAZN until hes been a pro for 13 years.

Garcia has only been in the professional ranks since 2016. He’s not accomplished anything yet to show a company like DAZN that he’s worthy of getting a monstrous $700 million contract. At this point, even a tiny contract would be risky to pay Ryan. Until he’s beaten a quality fighter, you have to take a wait and see approach with him.

Golden Boy needs to step up the level of opposition for Garcia by matching him against some of these fighters:

If Ryan Garcia can’t beat most if not all of those fighters, then he’s obviously not worthy of a $700 million contract.

Will Golden Boy have issues with Ryan Garcia if/when he captures a world title?

Things could change if Garcia tastes a lot of success, and/or if his career suddenly tanks. Garcia’s career going downhill is a real possibility too, because he’s not the biggest puncher. He’s never fought any of the talented lightweights to prove whether he’s worthy of a big contract. With the problems that Golden Boy has already had with Garcia, what happens if he wins a world title?

Does he get too big for his britches at that point?  That could be a real nightmare for De La Hoya if Garcia ends up as a headache for them down the road. If he becomes a diva, they might end up with a fighter that’s more trouble than he’s worth.

“I’m happy to announce that with a major bout like this one, the fans deserve the best undercard possible. Our next big major star in the making, Ryan Garcia, will be fighting in Las Vegas,” said De La Hoya during Wednesday’s news conference in Los Angeles. He’s fighting Duno-it’s a fight the fans wanted and it’s going to be a tough fight.”

It could be a tough fight for Garcia, 21, in facing Romero Duno (21-1, 16 KOs) on November 2. If Garcia can’t dominate a fringe level fighter like Duno, then it’s useless for De La Hoya to continue to entertain his dreams of Ryan getting $700 million contract. Runo is the type of guy that the talented contenders/champions would dominate at lightweight. For Garcia to be seen in the same light at the best fighters at 135, he’s got to make it look easy against Duno.

The only thing we can do is judge Ryan by how he performed in the past, right? He struggled against Carlos Morales (19-4-3, 8 KOs) last September in winning a 10 round majority decision. Morales, 29, is a second tier fighter, and not a contender. The top dogs at 135 would have no problems beating Morales. It’s not a good sign that Garcia couldn’t beat him with ease, because this was a test for him. He didn’t pass that test. It was wise for Golden Boy not to put Garcia back in with Morales in a rematch, because he could have been exposed even worse the second time around.

“I get to fight the guy I wanted to fight most,
Romero Duno,” said Ryan Garcia during the Canelo-Kovalev kickoff news conference. “They all said I was scared and I was worried about him and now I have the chance to get my respect and show everyone I’m a real fighter. Everybody stay tuned. It’s
going to be a big fight,” said Garcia.