Claressa Shields vs. Ivana Habazin on October 5 on SHOWTIME 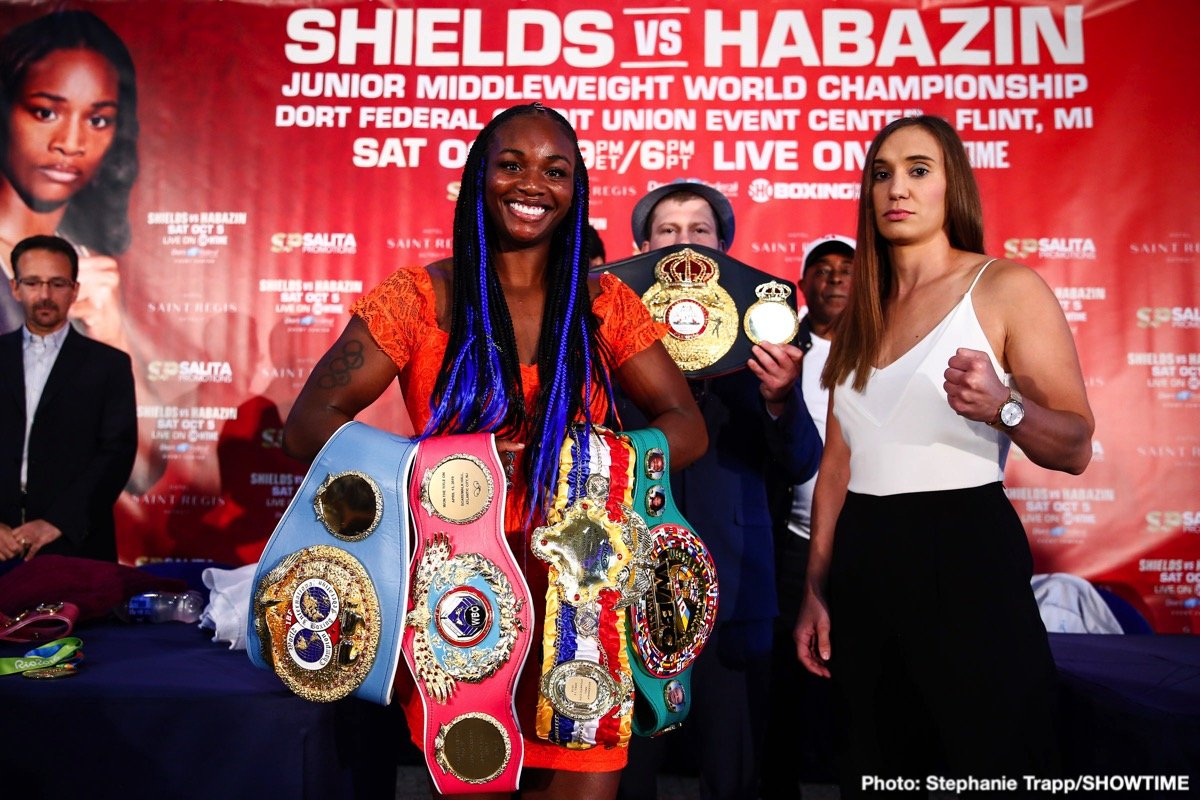 The vacant WBC Women’s Diamond Super Welterweight Championship will also be on the line in Shields’ first professional fight in her hometown.

The homecoming fight was initially scheduled for August 17 and postponed in June after Shields suffered a minor injury to her right knee while doing roadwork.

Shields vs. Habazin is promoted by Salita Promotions. Tickets for the live event go on sale today/Tuesday, August 6 at 2 p.m. ET and can be purchased at Ticketmaster.com and at the Dort Center box office.

The 24-year-old Shields (9-0, 2 KOs) is a two-division titlist who became the undisputed middleweight champion with a near-shutout victory over Christina Hammer in April on SHOWTIME. In doing so, she joined Terrence Crawford, Jermain Taylor, Bernard Hopkins, Oleksandr Usyk and Cecilia Braekhus as the only fighters to have unified all four major world titles in any weight class (Katie Taylor has since joined the prestigious list).

Now, the Flint star seeks to make even more history in her sixth headlining appearance on SHOWTIME. With a win over Habazin, Shields would become a three-division champion in just 10 bouts, breaking the record of Vasiliy Lomachenko, who accomplished the feat in 12 fights.

“I’m more excited than ever. I’m 100 percent recovered, and I can’t wait to get back in the ring and fight in front of my hometown fans in Flint as undisputed champion of the world,” said Shields. “Having the opportunity to become world champion in a third weight division faster than any man or woman in boxing history will make October 5 a night I will cherish forever. It’s another big step in history, and giant step forward in lifting women’s boxing on the road to equality.”

Ivana Habazin pleased to be fighting in U.S

Habazin (20-3, 7 KOs), of Zagreb, Croatia, is ranked No. 1 by the WBO at 154 pounds. The 29-year-old, who will be making her U.S. debut, won the IBF Welterweight Title over Sabrina Giuliani in 2014. In her next fight, Habazin dropped a unanimous decision to Braekhus in a historic unification bout where Braekhus picked up all four major world title belts. Most recently, Habazin avenged one of only three losses in her career to Eva Bajic in Zagreb.

“It’s an honor and a dream to fight in the U.S. on national television,” Habazin said. “A lot of fighters never get this opportunity in their careers so I know I need to make the most of it. I’ve been training for this fight since June and the postponement has only given me more time to get ready. I intend to put my best effort forward to impress the fans and show that I am for real.

“And, I am not just coming to fight for a world title, I am fighting for my life and my career. I believe I am the best and now I got the chance to prove that, and there is no better opponent for that than Claressa Shields.”

“From Christy Martin and Laila Ali to Cris Cyborg and Ronda Rousey, and now Claressa Shields, SHOWTIME has long been the pioneer in women’s combat sports,” said Gordon Hall, Executive Producer of SHOWTIME BOXING: SPECIAL EDITION. “Without question, Claressa Shields is the face of women’s boxing and we’re excited to present yet another historic milestone in her career as she looks to capture a third division championship in record time. This is Claressa’s sixth appearance on SHOWTIME and yet another test as she continues her personal quest to become the greatest of all time.”

“With the new date, this fight is going to be even more significant,” said Dmitriy Salita, President of Salita Promotions. “Claressa has had time to get 100 percent healthy and in the best shape of her life as she goes down in weight to fight for another historic accomplishment. On the other hand, Ivana has used this extra time to prepare for Claressa both mentally and physically. She has remained in camp throughout the summer as she prepares to come to America to upset Claressa and fulfill what she feels is her destiny. It’s going to be two fighters at the top of their games.”

“October 5 will be a magnificent event for Claressa Shields, for women’s boxing, and for Claressa’s hometown city of Flint,” said Mark Taffet, manager of Claressa Shields. “Claressa continues to shine a beacon of light on the sport, making history in each and every fight and reaching levels previously unimaginable. She is a once in a lifetime athlete and young woman, and if she is victorious on October 5 she will become the fastest man or woman in boxing history to win a world title in a third weight division.”

An all-Detroit shootout and an appearance by an exciting and popular international female fighter will highlight the non-televised undercard of the Saturday, October 5 event at the Dort Federal Event Center in Flint, Mich., that is headlined by the Claressa Shields vs. Ivana Habazin 154-pound title fight live on SHOWTIME.

In support will be an exciting five-fight mix of local and international talent, topped by a classic “All Detroit” 10-round showdown between West Detroit’s WBO No. 13-rated super flyweight Jarico “Great Lakes King” O’Quinn (12-0-1, 8 KOs) and East Detroit’s James “O.G.” Smith (13-2, 7 KOs).

“Homecoming for Herstory” is promoted by Salita Promotions. Tickets can be purchased at Ticketmaster.com and at the Dort Center box office.