Hearn: Golovkin is tired of waiting for Canelo 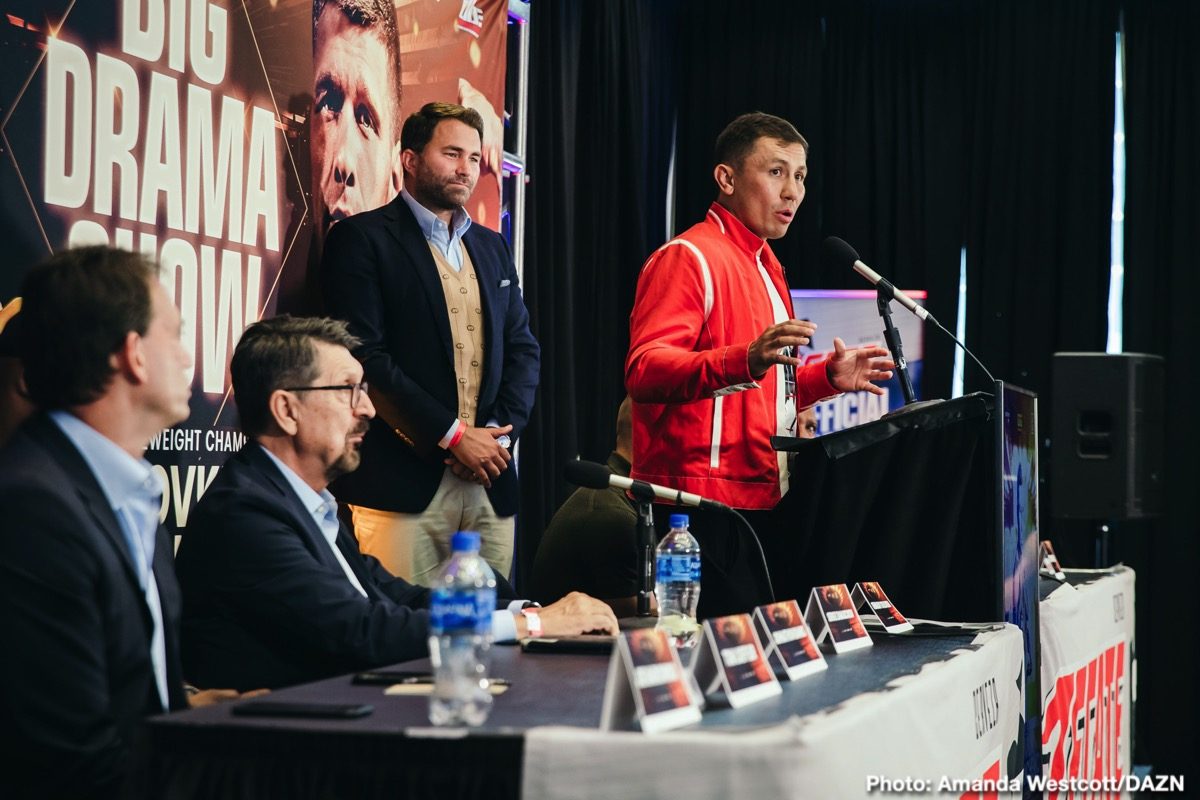 By Dan Ambrose: Gennady Golovkin is tired of waiting on a third fight with Saul Canelo Alvarez, says his new promoter Eddie Hearn. He states they can’t make Canelo fight Golovkin doesn’t want to, and he turned down a fight against him for September. DAZN wanted the fight, but Canelo said he wasn’t interested in facing GGG again, says Hearn. Canelo is looking instead in fighting WBO light heavyweight champion Sergey Kovalev in November.

Hearn likes that fight, but obviously not as much as a trilogy match between Canelo and GGG. Hearn says that he’s spoken to Golovkin, and decided to make their own moves. If Canelo won’t fight GGG, then Hearn wants to match him against the following fighters:

It’s unclear what Golovkin feels about fighting those guys, and they’re big fighters that would make things difficult for him.  Those wouldn’t be huge fights like a third fight for Canelo for Golovkin, but if this is the best that Hearn can do, then he probably won’t turn them down. Presently, Golovkin will be fighting for the vacant IBF middleweight title next month against Sergiy Derevyanchenko on October 5 at Madison Square Garden in New York.

“It’s a great honor, because GGG is a great fighter, and I’ve always been a massive fan,” said Hearn to Fighthub. “The Derevyanchenko fight on October 5th, is a really, really big fight for him [Golovkin]. It gives him a chance to become a two-time middleweight champion. Their styles should gel as well, and we want to deliver the big fights for him. We have a great 160 and 168-pound stable now. With Billy Joe Saunders at 168, Callum Smith at 168, and Demetrius Andrade. He’s probably one of the most avoided fighters at 160 as well.

Now we’ve got to put them all in together. Danny Jacobs as well. But he’s not our fighter unfortunately yet,” said Hearn about Canelo Alvarez.

If Golovkin gets past Sergiy Derevyanchenko on October 5th, it doesn’t sound like Hearn has great options for him. Hearn wants to match the 5’10 1/2″ Golovkin against big super middleweights from his stable, and that’s not a good deal for GGG. He’s small middleweight, who could easily fight at 154. Asking GGG to move up to 168 to fight bigger guys makes no sense. It would be worth it for Golovkin to do that if those guys were popular.

Saunders, Callum and Jacobs aren’t that popular, and they’re all huge fighter. Demetrius, 6’1″, is a tall southpaw, and he doesn’t have a fan base either. These are all tough fights for Golovkin, but with little to gain for him. He’d be better off fighting WBA ‘regular’ middleweight champion Ryota Murata or WBC champion Jermall Charlo. Fighting one of the welterweights would be a good option for GGG like Errol Spence Jr. or Keith Thurman. Jermell Charlo or Jarrett Hurd would be excellent opponents for Golovkin to fight.

Canelo will fight who he wants; GGG should make his own moves

“So do [want to see Canelo vs. Sergey Kovalev], but I said to Gennady, ‘We’ve got to make our own moves.’ Canelo is going to fight who Canelo wants to fight,” said Hearn. “Don’t wait on him. Have our own strategy, and have our own plan. Win the world middleweight championship. Hopefully on Cinco de Mayo, Canelo will fight him. If not, fight Demetrius Andrade. Fight Callum Smith, fight Billy Joe Saunders. or fight Daniel Jacobs rematch. You’ve got to have your own plan. I think he agreed.

I think he was tired of waiting around. He was supposed to fight Canelo on September the 14th, but Canelo said, ‘No, I don’t want to fight Gennady. He’s the boss in that division. So he’s going to fight who he wants to fight. We’ve got to make sure Gennady Golovkin looks good against Derevyanchenko, and wins that world title. And then fans, ‘no, that’s the fight that needs to be made.’ They definitely wanted to, but they can’t make a man fight,” said Hearn about DAZn wanting Canelo to fight Golovkin in September. “But you have to respect Canelo, because this year in 2019, it’s Danny Jacobs and Sergey Kovalev. But maybe DAZN said to Canelo, ‘you’ve got to fight Gennady Golovkin,’ and he said, ‘I’ll fight who I want to fight.’

Canelo has already made it clear that he doesn’t want to fight Golovkin again. For that reason, it would be smart for Golovkin to move on, and ignore him. Canelo doesn’t want the hard work involved in fighting GGG again, because he was hurt badly on two occasions by him last time. In a third fight, Golovkin will improve on the mistakes he made in the first two contests, and apply a lot more pressure on the Mexican star. Golovkin will increase his punch rate.

The truth is Golovkin doesn’t have good options with Hearn’s Matchroom stable fighters. All those boxers are guys that the other top 160 & 168-lb fighters don’t want to fight for one reason or another. If Golovkin gets stuck fighting them, he’ll be doing Hearn a favor while putting himself at risk of losing.

“I might put him on the Joshua-Ruiz card. It might be against Liam Smith,” said Hearn about Jessie Vargas. “I still want him to fight Munguia. I’m disappointed that fight never got made. There’s no excuse. Imagine that fight on the September 13th week. On the Mexican holiday. He’s another guy we’ve got to deliver a big fight for.

We’re going to see [Juan Francisco] Estrada vs. [Kal] Yafai unification. It’ll be in December in the U.S. The winner of that fight will fight Rungisai. Rungvisai will have a fight between. I’m a big Chocolatito fan. So he’s welcome anytime,” said Hearn when asked if he’d heard of Roman Gonzalez coming over to DAZN.

Juan Francisco Estrada will likely beat Khalid Yafai with ease, and that’ll set up a third Estrada vs. Srisaket Sor Rungvisai fight. Rungvisai lost his last fight to Estrada by a 12 round unanimous decision last April at The Forum in Inglewood, California. Rungvisai doesn’t fight well in front of large pro-Estrada crowds in Southern California. Both of their previous two fights together have taken place in Southern California, and Estrada has had the crowd on his side both times. Rungvisai fights a lot better when he’s in front of crowds that support him. That’s never going to happen when Rungvisai is facing Estrada, because he’s the A-side. If they brought the third fight back to Rungvisai’s home country of Thailand, it’s very likely he’d win decisively.