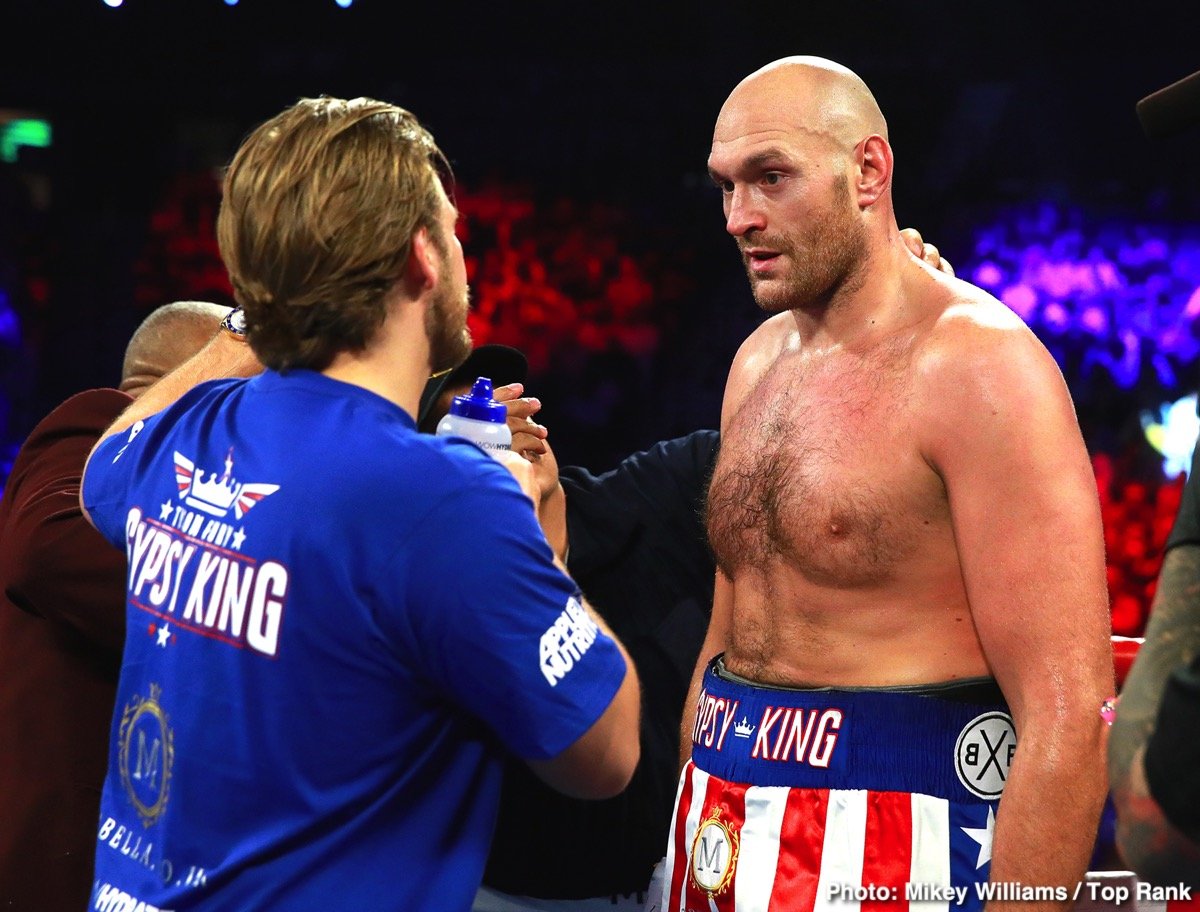 By Charles Brun: Tyson Fury still appears to be mentally shook from the 12th round knockdown he suffered against WBC heavyweight champion Deontay Wilder last December. Fury (28-0-1, 20 KOs) comments that it was the type of knockdown that some fighters never get up from, but somehow he was able to rise to his feet.

Fury’s ability to beat the count was aided by the referee choosing not to stop the fight on the spot after knocked him flat with a right-combination in the 12th. The referee was unquestionably Fury’s savior by making the decision to give a count while he was lying unconscious. There’s still a lot of boxing fans wondering why the fight fight wasn’t stopped at that moment, because was lying completely still on the canvas.

“It didn’t hurt at all. I didn’t feel any pain so I probably was not [knocked out],” said Fury to SiriusXM. “As easy as I got up, I may never have got up. That was the type of punch that sometimes people won’t wake up from. Especially hitting me with a right hand and as I was going down he hit me with a left hook as well,” said Fury.

Obviously, what Fury means by saying that “it didn’t hurt” doesn’t matter one bit. When a fighter is knocked unconscious, as Fury was in the 12th by Wilder, they don’t feel pain. After all, they’re unconscious so there’s no pain involved. It’s when they get up, and start taking additional shots is when they start feeling the pain from the blows. It was fortunate that Fury wasn’t seriously hurt by his knockdown in the 12th, because it could have been bad.

This was the second time in the fight that Fury had been dropped by Wilder, and he tired and reeling at that point in the fight. Fury had done a good job of slapping and moving in the first eight rounds of the contest, but he was exhausted by the ninth. That’s when his feet stopped working, and Wilder able to catch him with huge shots. It was impossible for this writer to give Fury any of the last four rounds of the fight, because he was getting hit hard and slapping punches weren’t doing much damage.

Fury says he rallied in the 12th against Wilder

“So that should have been concrete, good night Vienna,” said Fury. “But the Gypsy King rose like a phoenix from the ashes off the canvas to rally back from the 12th and it was an epic round.”

Fury came back a little after being dropped by Wilder in the 12th, but he still didn’t win the round. Some of Fury’s boxing fans believe he should have been given the 12th, because he was able to land some slapping shots after being knocked down. That’s not  how things go in the sport. When a fighter gets brutally dropped, they aren’t given the round just because they were able to get up, and continue to fight. It’s nice that Fury was able to get back to his feet after the 12th round knockdown, but he didn’t the round.

Next month, Fury is fighting Otto Wallin (20-0, 13 KOs) on September 14 on ESPN+ at the T-Mobile Arena in Las Vegas, Nevada. If there’s any after effects from Fury’s knockdown against Wilder, the 6’6″ Wallin has the power to finish what Deontay started.