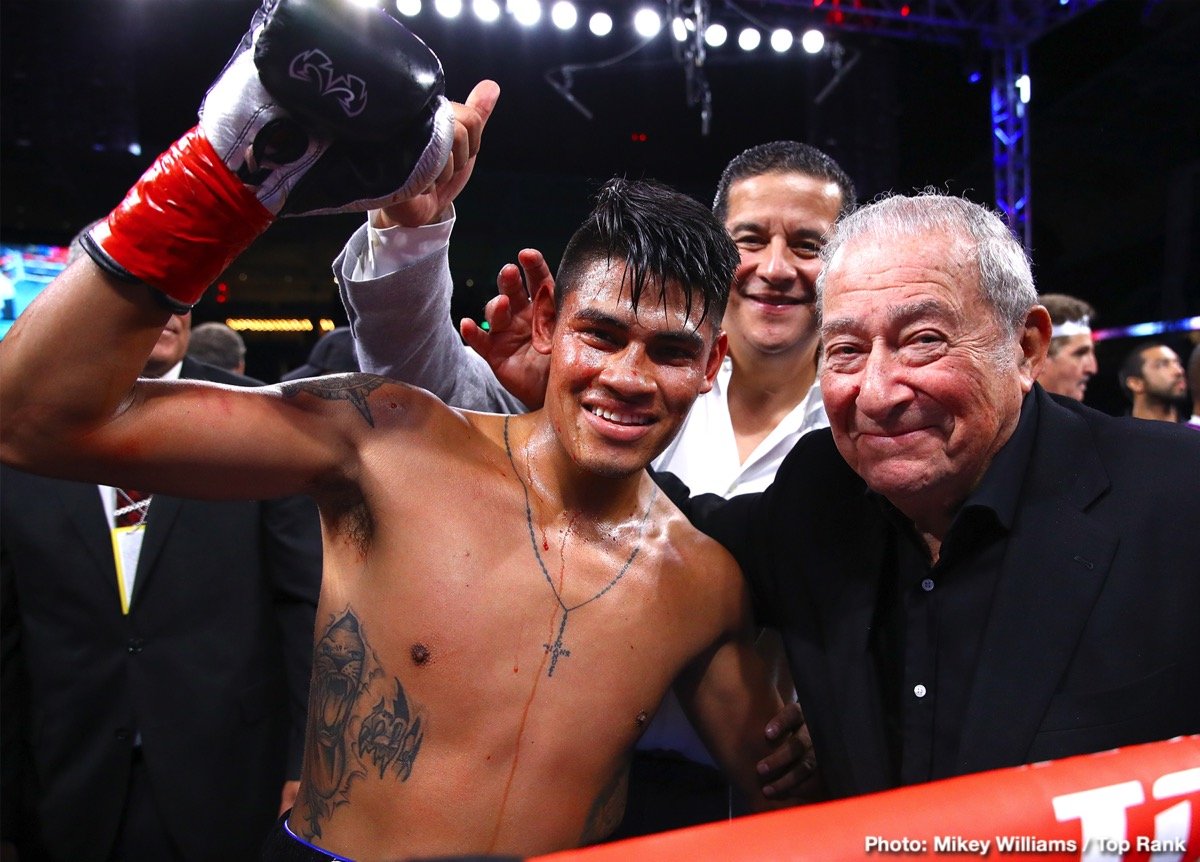 By Dan Ambrose: WBO super bantamweight champion Emanuel Navarrete (28-1, 24 KOs) will be defending against #2 WBO Juan Miguel Elorde (28-2, 15 KOs) on September 14 in the co-creature attraction on the Tyson Fury vs. Otto Wallin card on ESPN+.

This is a lightning quick turnaround for the 24-year-old knockout artist Navarrete, because he just finished destroying Francisco De Vaca (20-1, 6 KOs) by a third round knockout last Saturday night at the Banc of California Stadium, in Los Angeles, California.

After the fight, Navarette’s promoter Bob Arum of Top Rank Boxing said he would be returning to the ring on September 14. Navarrete didn’t sustain any punishment in his quick knockout of De Vava, so it easy to schedule him again.

Elorde is ranked #2 with the World Boxing Organization. The highly ranked Elorde’s resume is filled with weak opposition from top to bottom, and the problem . His career opposition is unquestionably as bad as heavyweight Otto Wallin, who will be fighting Fury in the main event. It’s possible that Elorde was the best that Top Rank could get on short notice, but this is still a disappointing choice. Elorde’s high ranking is difficult to understand given the quality of the opposition he’s faced during his career.

Elorde’s best opponent on his 11-year pro career is Jerry Guevara (9-3-1, 6 KOs), who he lost a one-sided four round unanimous decision to on November 11, 2011. The scores were 40-36, 40-36 and 39-37.  Guevara was later easily beaten by Christopher Diaz, Vic Pasillas and Victor Sanchez. Since his loss to Guevara, Elorde has won his last 18 fights in the past eight years. However, Elorde’s opposition has been horrible. He’s been beating fighters that are 3rd tier level guys, and he even has an “unknown” opponent without a name among his 18 wins. Only the WBO knows why they gave Elorde a #2 ranking with their organization, but it’s very similar to the high ranking heavyweight Tom Schwarz, who was given based on wins over lower level opposition before fighting Fury last June.

“The paperwork is done and I expect to get it back shortly,” Top Rank vice president Carl Moretti said to ESPN.com. “Elorde is ranked No. 2 in the WBO and the fight is sanctioned. Elorde was already in the gym and he took the fight with no hesitation. It’s Mexico versus the Philippines on Mexican Independence Day weekend. We’re very happy we could get the deal done with all parties.”

Elorde is related for former Filipino boxing star and Hall of Famer Gabriel ‘Flash’ Elorde. That guys was a talented fighter from 1960 Unfortunately, Elorde hasn’t shown the same type of ability as his grandfather ‘Flash’ Elorde.

This will be a huge step for Elorde to be taking on a talented fighter like Navarrete, and it’s going to be difficult for him to deal the power and size of the Mexican warrior.