Peter Quillin vs. Alfredo Angulo on Sept.2 on FS1 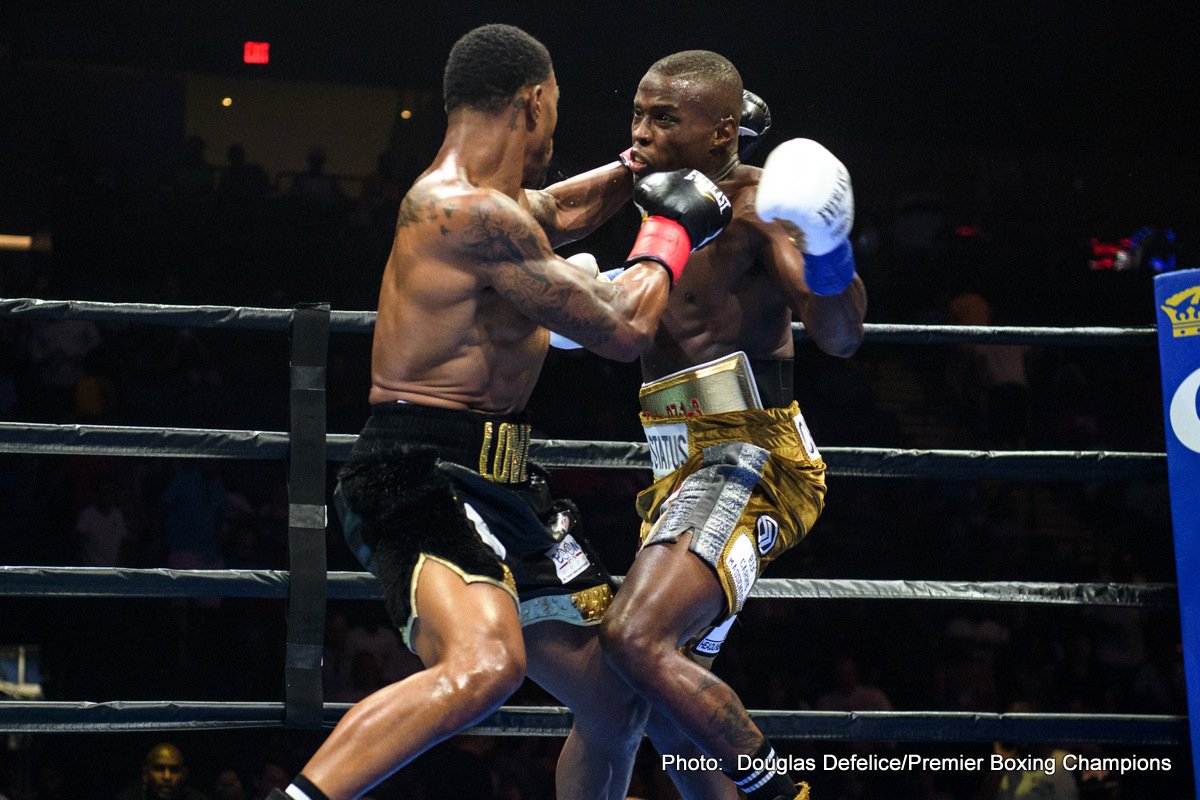 “This is a great fight card with anything a boxing fan could want, featuring former champions, top contenders and future stars, all in evenly-match bouts that promise drama,” said Tom Brown, President of TGB Promotions. “Peter Quillin vs. Alfredo Angulo promises to be a good, old fashion slugfest with two fighters looking to prove they’re ready for a world title fight next. With exciting prospects like Chris Colbert and Jesus Ramos, plus evenly matched fights between contenders in Williams vs. Dulorme and Rosario vs. Murtazaliev, this will be an action-packed night from top to bottom.”

Tickets for the event, which is promoted by TGB Promotions, are on sale Saturday, August 24 at 12 p.m. PT and can be purchased at www.rabobankarena.com and AXS.com.

Quillin (34-1-1, 23 KOs) is seeking to climb back into the championship ranks and must go through Angulo before reaching them. The 36-year-old, who was born in Chicago and now lives in Brooklyn, won the middleweight world title against Hassan N’Dam in 2012. He successfully defended it three times. And, he is coming off a no-decision against former super middleweight champion Caleb Truax on April 13 in an FS1 PBC Fight Night main event. He had taken the first two rounds on all three judges’ scorecards before the action was halted when a deep cut over Truax’s right eye, caused by an accidental head butt, brought an end to the fight and resulted in a no-decision.

Quillin: Angulo is an important fight for me

“It looks like the Caleb Truax fight wasn’t meant to be, but this fight against Angulo is an important fight for me to establish myself in this division,” said Quillin, who was originally scheduled to rematch Truax on August 31, before Truax withdrew due to an Achilles injury. “I’m ready to go 12 rounds right now. I just have to stay ready and stay in shape because we’ve had a great camp where we were able to build on certain things. This is what was meant to be and I’m going to make the most of it with a great performance on September 21.”

Angulo (25-7, 21 KOs) enters the match against Quillin after a knockout victory over Evert Bravo on April 20. The 37-year-old veteran, who was born in Mexicali, Mexico and now lives in Coachella, California, has been in with some of the top boxers and sluggers during a career that has seen him in numerous exciting bouts against the likes of Canelo Alvarez and Erislandy Lara amongst others.

“I am looking forward to showing my fans the best Alfredo Angulo on September 21,” said Angulo. “I have been working hard towards this opportunity. This is a chance to move closer to a world title and with hard work and the support of my team, I’m going to win that title.”

Representing his hometown of Brooklyn, N.Y., Colbert (12-0, 4 KOs) has begun to make a name for himself showing off tremendous skills across his first 12 pro victories. The 22-year-old turned pro in 2019 after an impressive amateur career and most recently dominated Alberto Mercado on his way to a unanimous decision on FOX in June.

“I’m dedicating this bout to the fight against childhood cancer,” said Colbert, who was inspired after recently being introduced to a young fan who has cancer. “I plan on going in to Rabobank Arena and doing what I do best on September 21. And, I never make predictions for my fights, but I’m always looking to dominate and if the knockout comes then it comes. I have a job to do and I just have to stay focused on the man in front of me. It’s going to be ‘Prime Time’ on September 21 so that fans will want to make sure to tune-in for this one.”

Fighting out of Los Mochis, Sinaloa, Mexico, Beltran (33-7, 22 KOs) will return to action after dropping a decision to former world champion Yuriorkis Gamboa last November. The 30-year-old challenged Roman Martinez for a super featherweight title and lost by split decision in September 2012.

“I’m very excited for this opportunity to fight Chris Colbert on FS1 and FOX Deportes,” said Beltran. “I have fought the best 130 pounders in the world – Rocky Martinez, Gamboa, Mickey Roman and I have challenged for the world title twice. This is the type of fight I need on national TV to get myself back in contention. I’m very serious about winning and happy to have my training camp in Los Angeles with my cousin, former world champion Ray Beltran, who is helping me prepare for victory.”

Williams (18-0, 13 KOs) extended his unbeaten record in April with a split decision victory over Justin DeLoach in Las Vegas. The 35-year-old from Los Angeles previously won a decision over David Grayton in September 2018.

A longtime contender, Dulorme (24-3-1, 16 KOs) earned a majority draw in his last fight against former world champion Jessie Vargas last October. The 29-year-old had previously dropped a narrow decision to top contender Yordenis Ugas in August 2017. That defeat came after a streak where the Puerto Rican fighter won eight of nine fights, with his only loss during that stretch coming in a title fight against Terrence Crawford.

At just 18-years-old, Ramos (10-0, 9 KOs) scored knockouts in his first nine fights since turning pro last May. The Casa Grande, Arizona-native most recently went the distance for the first time in his pro career, winning a shutout unanimous decision over Kevin Shacks in June on FOX.

Fighting out of Paterson, New Jersey, Edwards (12-3, 3 KOs) won his first 11 pro fights including victories over then unbeaten fighters Azriel Paez and John Delperdang. The 29-year-old most recently lost a decision to undefeated Mykquan Williams in May.

The 24-year-old Rosario (19-1-1, 13 KOs) has won his last five fights and is unbeaten in eight bouts since his only pro loss to Nathaniel Gallimore in 2017. The Dominican-born fighter residing in Florida has taken down a slew of contenders and top prospects including Jamontay Clark, Justin DeLoach, Marcos Hernandez and most recently, Jorge Cota on FS1 in April.

Russia’s Murtazaliev (16-0, 13 KOs), who now resides in Oxnard, California and is unbeaten since turning pro in 2014. The 26-year-old has delivered knockout victories over Elvin Ayala and Bruno Leonardo Romay in 2019.