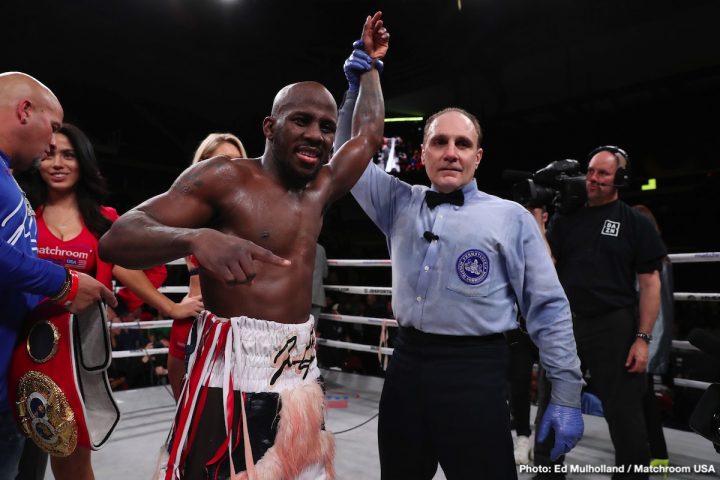 IBF super featherweight champion Farmer (30-4-1, 6 KOs) says he and Gervonta built up their rivalry themselves for the last five years since 2014, and he feels that the $2 million he received from Mayweather Promotions is too low. Farmer, 29, is still open to making the fight with Davis (22-0, 21 KOs), but it’s going to require a better offer. He won’t accept the $2 million. Davis, 24, seems annoyed by Farmer not agreeing to the offer from his promoters. However, Davis recently turned down a $5 million offer from Matchroom Boxing to face Farmer.

Obviously that money offer being widely known makes it hard to get Farmer to agree to less than half of that sum at $2 million. From Farmer’s side, it doesn’t work well for him to take a risky fight like Gervonta if the money isn’t huge. He’s better off moving on, and making title defenses of his IBF belt. If Mayweather Promotions wants to make the fight with him, they’ll need to increase the offer to a high enough figure to make Tevin happy.

Tevin isn’t saying how much he wants for the unification match against Davis, but it’s quite possible that he’ll want double than the offer that’s on the table. Farmer has leverage, because he doesn’t care about unifying the division. He just wants to provide for his future, and it’s not his goal to unify the super featherweight division. Farmer’s contract with Matchroom Boxing USA has expired, and he says he wants to do some things before he renews.
30

“I’m not even entertaining that sucka no more. Just keep that same energy,” said Farmer.

“It’s definitely insulting, you know?” said Farmer to AB Boxing News in discussing the $2 million offer he received from Mayweather Promotions CEO Leonard Ellerbe to face Gervonta Davis. “This is a fight that me and Davis built up for years since 2014. I just feel like we deserve to get the right money. I’m not letting nobody low-ball me. I don’t need $2 million dollars. So, make it right, and it can happen.

“I didn’t renew because right now I’ve got some things going on that I can’t speak about,” said Tevin about his contract with Matchroom Boxing USA having expired recently. “I definitely want the fight [with Tank Davis] to happen, but they’ve to to pay what they weigh. We built this fight up ourselves for five years. It’s insulting. They can go give that $2 million to somebody that’s broke and that is desperate. I’ve got a lot of things going on,” said Farmer.

It’s not a given that Farmer will beat Diaz, and he should think about that that before he walks away from the Gervonta fight. Farmer is smart to want to try and get a better deal for the Tank Davis fight, but if he doesn’t get a better offer, he could lose his IBF title against Diaz. The money that Farmer will make defending against Diaz will likely be well below $2 million. Once Farmer no longer has the IBF strap, he can forget about a fight against Davis. That ship will have sailed. For that reason, Farmer needs to be certain that he’s got what it takes to beat Diaz before he takes that fight. If Farmer isn’t certain, then he should just keep making safe title defenses against the top 15 contenders in the International Boxing Federation’s rankings.

“Boxing is a short career. You’ve got to make it happen,” said Farmer. “I stated on the Max Kellerman show that the fight [with Gervonta] isn’t going to happen. He asked me why, and I said because of politics, and it’ll be over money. The fans just want to see the fight. They don’t care about our futures. And, they don’t care if we’re rich or poor. They want to see a fight. The only person that cares about the fighter is the fighter.

I already told Jo Jo Diaz, if that fight don’t happen [with Davis], me and Jo Jo are going to try and get it on. This is definitely going to happen. So it looks like we’re going to move forward for Jo Joe Diaz. Let’s see what’s up with Jo Joe Diaz. I definitely want Jo Jo next if the fight can’t happen. I don’t really care about being disputed anyway. That s–t don’t move me. There’s too many politics nowadays. Let’s make this money, and keep winning. That’s all that matters,” said Farmer.