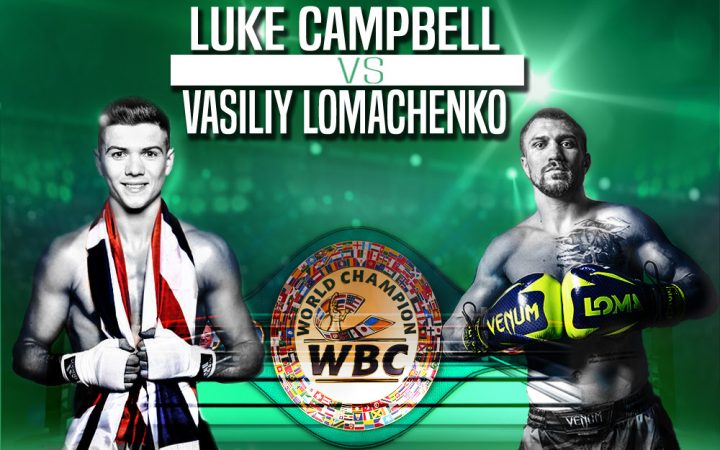 By Barry Holbrook: Luke Campbell is certain that he’ll have come out victorious against WBA/WBO lightweight champion Vasiliy Lomachenko in two weeks from now on August 31 in London, UK. The 31-year-old Campbell is a big underdog in this fight, and many expect him to lose in the same fashion as fellow countryman Anthony Crolla. Campbell will have the fans on his side, but that may not be enough for him to win.

Lomchenko destroyed Crolla in four rounds last April in Los Angeles, California. Former WBA 135 pound champion Crolla (34-7-3, 13 KOs) took a frightful beating before the fight was halted with him lying bleeding and battered on the canvas.

Campbell (20-2, 16 KOs) fighting for a world title for the second time in his six-year pro career, and he’s hoping to have better luck in the scoring than he did when challenge Jorge Linares for his WBA lightweight title in September 2017.

The experience that Campbell gained from the Linares fight could help him against Lomachenko if he can stay out of the way of his shots, because the 2-time Olympic gold medalist will be looking to unload on him.

“They all get beat in the end, don’t they? Sooner or later. I believe I will beat him. I’m fighting the elite of the elite. “I’m confident in the 19 years that I’ve put into this sport, always being disciplined,” said Campbell to skysports.com.

Lomachenko, 31, looked vulnerable in his fight against Jose Pedraza last December. Pedraza landed a lot of shots, and marked up Lomachenko’s face.

On the undercard, heavyweight contender Hughie Fury will be facing former WBA heavyweight champion Alexander Povetkin in a 12 round fight. This is an important match for the young 24-year-old Fury, as he wants to challenge for a world title again. The 6’6″ Hughie will need to find a way to handle the big experience advantage that the 39-year-old Povetkin has going for him.

The good news for Fury is Povetkin hasn’t looked great since his win over Johann Duhaupas in 2016. Povetkin’s once explosive power has disappeared since that fight, and he’s less than spectacular in his subsequent fights. Nevertheless, Povetkin is still a very talented fighter with heavy hands, and a huge pedigree going for him. Hughie is a good basic heavyweight, but he’s thus far not shown the kind of talent needed for him to be considered an elite level guy. In Hughie’s last fight, he used a lot of movement to defeat former WBC heavyweight champion Samuel Peter by an injury stoppage in the seventh round last July.