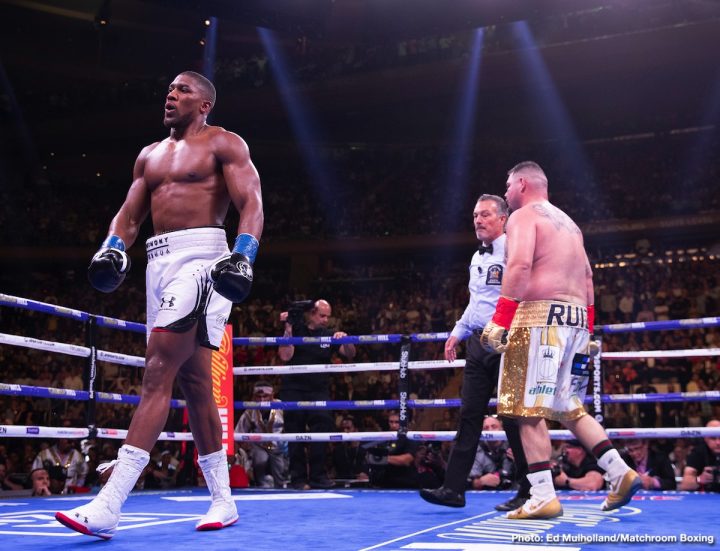 By Charles Brun: Anthony Joshua’s nutritionist Mark Ellison laughs at the talk going around that AJ has lost a massive amount of weight in preparing for a rematch with Andy Ruiz Jr. on December 7. Although it seems patently clear to fans that Joshua has lost at least 15 to 20 pounds, Ellison isn’t confirming that he’s lost weight.

According to Ellison, Joshua (22-1, 21 KOs) only makes “subtle” changes to his size each fight, apart from the huge amount of muscle he gained after the Olympics.

Fans wonder whether Joshua is draining down, because he’s looking considerably slimmer lately in photos and in video. It’s unclear whether Joshua’s nutritionist Ellison is monitoring his size given that training camp hasn’t started yet for his December 7th fight against Ruiz Jr.

They’re supposed to be fighting each other in Saudi Arabia, but Ruiz is making it known that he doesn’t want to fight in that country. He wants the rematch back in New York, where they fought on June 1. Joshua’s Eddie Hearn of Matchroom Boxing isn’t showing interest in letting him fight in the U.S again after the bad experience he had in getting knocked out in the seventh round.

‘I’ve got my computer there with all my data in it since he was at the London Olympics [in 2012],” said Ellison to secondsout about Joshua. “He definitely gained some muscle mass after the games. It’s not significant. It’s not massive,” said Ellison talking about the muscle mass Joshua packed on after the Olympics. “I always laugh when I see an article in the paper, saying, ‘look at his new physique,’ and I’m looking at the numbers, thinking, ‘I don’t know.’ They’re talking about a story they wrote from a picture.

We work with Rob [McCracken], and we work with the whole team. I’m seeing what the physical game plan will be for each fight.  Whether it’s strength or power or whatever it’s movement or fitness. When we talk about his weight, it’s very subtle changes. We’re not talking about huge changes. Joshua is unbelievable. He trains all year round. Even if you win, you can’t celebrate. We get in and do a debrief,” said Ellison.

Ruiz Jr. proved that he could beat Joshua with a diet of snickers last time, and it might be a waste of time for AJ to be so focused on nutrition and weight. Of course, Ellison isn’t admitting anything about Joshua’s weight having gone down. But if it has, he could be wasting his time. Boxing fans don’t buy that Joshua hasn’t lost weight, because it’s obvious that he’s dropped weight. Joshua’s shoulders and chest look considerably smaller since his loss to Ruiz.

The weight and nutrition seems to a move in the wrong direction for Joshua. His problems are related to his poor boxing ability, and his weak chin.

Ruiz Jr. beat Joshua mentally last time they tough, and that’s something that diet and exercise can’t change. Joshua’s boxing skills won’t improve with diet and exercise, and he’s stubbornly sticking with his same trainer Rob McCracken out of loyalty. Whether Joshua will continue to be loyal to McCracken after a second knockout loss to Ruiz will be interesting to see. Ruiz looks like a better fighter than Joshua, and that’s going to stay consistent. Joshua has always been flawed since his amateur stays. He arguably lost three in the London Olympics in 2012, but he was given a gold medal anyway.

As a pro, Joshua’s promoter Hearn has been careful in not matching him against guys that could potentially beat him. Hearn never put him in with Deontay Wilder or Luis Ortiz. Eddie didn’t even want to put Joshua in with David Haye when he had the chance. Joshua didn’t fight Wladimir Klitschko until he was 40, and coming off of a two-year layoff.

“I feel Anthony Joshua is going to be doing way more boxing, and not trying to exchange that much,. I think so,” said Benavidez when asked if it’s going to be the same outcome as the first Joshua-Ruiz fight last June. “Maybe [a knockdown]. I feel that Andy Ruiz has tasted that glory. He’s tasted that money, and he’s tasted that fame. He doesn’t want to let go of it.

All the scientific training that Joshua had going for him last time, and yet he was still knocked out by a chubby looking fighter that likes to eat chocolate. That should tell you something. Joshua might as well be eating candy, because he could have gotten the same results last last time with a poor diet.

Joshua may need to make a clean sweep of his entire training team if/when he gets knocked out again by Ruiz. AJ needs a clean slate. He should bring in a big broom, and sweep the entire training team out of there. Joshua can start from scratch with a new trainer, and perhaps get a cardio coach to help. AJ probably knows what foods to eat by now, so he can save money on a nutritionist. A good sports psychologist might be more useful to Joshua at this point than a nutritionist.