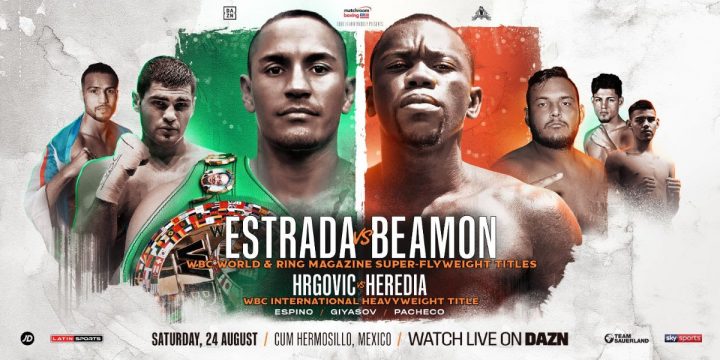 By Matt Lieberman: Juan Francisco Estrada is expecting to face WBA super flyweight champion Kal Yafai next if he’s successful in defending his WBC belt against Dewayne Beamon this Saturday on DAZN. This is a Zanfer and Matchroom promoted card. Estrada is expected to make easy work of the American Beamon, who has done little to earn a title shot.

WBC super flyweight champion Estrada (39-3, 26 KOs) will be making his first defense of his WBC belt against #14 Beamon (16-1, 11 KOs) on Saturday night at the Centro de Usos Multiples, in Hermosillo, Mexico.

2008 Olympian Yafai (26-0, 15 KOs) has looked shaky since winning the WBA 115-pound title three years ago in beating Luis Conception by a 12 round unanimous decision in December 2016. Since that fight, Yafai has successfully defended his WBA belt five times in beating these fighters:

Yafai’s 12 round unanimous decision win over Israel Gonzalez last November was a controversial one, as many boxing fans thought he lost. The judges scored it 116-112, 116-112 and 117-111. Boxing News 24 had Gonzalez winning. Yafai is promoted by Eddie Hearn of Matchroom.

“Winning [the Beamon fight], I expect a unification match with Yafai,” said Estrada to ESPN Deportes. “There are rumors of [me] fighting [Yafai] on Andy Ruiz’s rematch with (Anthony) Joshua, and there we will unify the titles, If all goes well on August 24, those are the plans. The truth is that I expect a hard and good fight for people. I have already seen Beamon fight and I have seen videos. He is a fast, strong fighter. It will be an exciting fight, and I hope he comes well prepared to give him a great show to people. We expect 10 to 12 thousand people to break the record,” said Estrada.

Estrada facing Yafai on the undercard of Anthony Joshua vs. Andy Ruiz Jr. rematch in Saudi Arabia will give them a lot of visibility for both of them. If they end up as the co-feature, it would be a great career boost for the winner, and even the loser.

🇲🇽 @GalloEstradaOfi takes time out during fight week to visit kids at the children’s hospital in Sonora 👊 #EstradaBeamon pic.twitter.com/lqcr4gP9oe

Estrada, 29, recently won the WBC title in beating champion Srisaket Sor Rungvisai by a 12 round unanimous decision on April 26. The fight took place in Los Angeles, California. The scores were 115-113, 115-113 and 116-112. Estrada built up an early lead, and then held on as the hard hitting Rungvisai came storming back late to make it close.