Golovkin and Derevyanchenko finalize deal for Oct.5 at MSG, NY 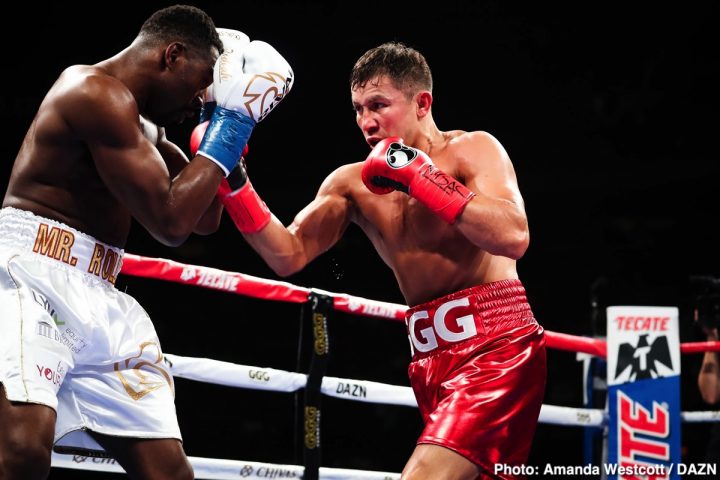 By Mark Eisner: Gennady Golovkin and Sergiy Derevyanchenko have agreed to terms for a fight for the vacant IBF middleweight title on October 5 on DAZN at Madison Square Garden in New York. They’ll be fighting for the International Boxing Federation that was recently stripped from Saul Canelo Alvarez.

It was reportedly a contentious negotiation until they were able to finally agree to the deal. Golovkin (39-1-1, 35 KOs) will be able to show the boxing world that he’s still the same fighter he was in the past.

Golovkin and Derevyanchenko will have a news conference this Thursday to officially announce their October 5 fight at Madison Square Garden in New York. GGG is expected to announce at the time a partnership with Matchroom Boxing promoter Eddie Hearn, whose fighters compete on DAZN. Hearn will be at the Golovkin vs. Derevyanchenko press conference on Thursday.

Golovkin-Dereyanchenko will fight for the IBF belt that was stripped from Saul Alvarez. The belt was stripped from Canelo when he failed to meet the International Boxing Federation’s September 4 deadline for his negotiations with Derevyanchenko, his mandatory challenger.

Golovkin and Derevyanchenko’s management bickered over the amount of hotel room Sergiy’s team would get, and the number of tickets. Additionally, they argued over the fines pertaining to the 160 pound weight, if either of them failed to make weight. There was also squabbles over the IBF’s morning weight check on the day of the fight, according to Dan Rafael.

Golovkin with a lot to prove

Some fans think GGG is on the downside since first fight with Saul Canelo Alvarez in September 2017. It’s difficult to say for sure though, because Golovkin fought well enough to deserve the victory in their first fight. In the second match, Golovkin appeared to battle Canelo to a standstill in coming on late in the contest. The judges gave the victory to Canelo based on his aggressiveness, and the fact that Golovkin was backing up all night. GGG’s new trainer Johnathon Banks said he though he should have stood his ground, and not let Canelo back him up. Golovkin backed up a lot, and he wasn’t changing things up by adapting to the different things that Alvarez was showing him in the fight.

Part of GGG’s problems might have been because he didn’t look like he was on the same page as his trainer Abel Sanchez. After the fights, Sanchez said there were things that he wanted to Golovkin to do that he failed to do.

Beating Derevyanchenko will help GGG prove many of his doubters wrong. However, for Golovkin to show the boxing fans that he’s still an elite level fighter, he’ll need to beat these kind of fighters:

Derevyanchenko, 33, is a good fighter. Whether he’s talented enough to beat Golovkin, we don’t know. When the 2008 Olympian Derevyanchenko stepped it up against Daniel Jacobs last October, he lost a 12 round split decision. Golovkin beat Jacobs in 2017 by a close and some would say controversial decision. Derevyanchenko is a legitimate #1 with the IBF based on his wins over Jack Culcay and Tureano Johnson. Those are the only wins on Derevyanchenko’s five-year pro resume that have come against top contenders.

Sources: Gennadiy Golovkin and Sergiy Derevyanchenko have finalized a deal to fight Oct. 5 for the vacant IBF middleweight title at MSG on DAZN, ending weeks of negotiations. There will be a press conference Thursday in N.Y., and Eddie Hearn will be there on behalf of GGG

Derevyanchenko can cause GGG problems

This could be a real nightmare for Golovkin in dealing with Derevyanchenk’s fighting style. The Ukrainian talent is smart, and he learns and adapts during his fights. In Derevyanchenko’s matches against Jack Culcay, Daniel Jacobs and Tureano Johnson, he adapted constantly to find things that worked. Derevyanchenko, 33, didn’t get stuck with the same game plan, and style.

That’s what Golovkin’s problem has been in his toughest fights of his career against Jacobs, Canelo and Kassim Ouma. GGG failed to adapt, and those matches became a lot tougher than they should have been.  They were always going to be hard fights for Golovkin, because those are/were excellent fighters. But Golovkin made the fights harder by not making precise adjustments.

The vacant IBF middleweight title is of less importance for the Golovkin vs. Derevyanchenko contest compared to the bigger trophy of getting a bout against WBA/WBC champion Canelo Alvarez (52-1-2, 35 KOs). The highly popular Mexican star was recently stripped of his IBF title by the International Boxing Federation. Canelo want’s his title back, as his goal is to unify the 160-pound division as soon as possible. Losing the IBF title frustrated Canelo, because he wanted to keep the belt. His promoters at Golden Boy were unable to put together a deal with Derevyanchenko’s promoter Lou DiBella before the IBF’s deadline.

The Golovkin-Derevyanchenko winner will have their best chance of getting a fight with Canelo by winning the IBF belt. Without that title, the chances are low for either of these guys to get a shot against Canelo. Golovkin is someone that Canelo has recently shown that he has no interest in fighting due to the bad blood there is between them.

Golovkin has made things hard on himself

GGG has made mistakes that has undermined his efforts at getting the third fight with Canelo. The mistakes are as follows:

Triple G was hoping to fight Canelo Alvarez in a trilogy match for September 14, but the Mexican star said no to fighting him. Golovkin had come up empty in his two previous scraps with Canelo, and he wanted a third fight.  When Canelo rejected a third fight with him, Golovkin took the Derevyanchenko match in an effort to win a bargaining chip with the IBF belt. DAZN approved the Golovkin vs. Derevyanchenko fight, but that’s not the match they wanted. With Canelo not interested in facing him, Golovkin needed to fight someone that DAZN would approve. Derevyanchenko met their approval, even though he fights on a different network, and doesn’t have a large fan base in the U.S.

With Golovkin not facing high quality fighters in between his fights with Canelo, some fans have gotten the impression GGG is just looking to cash out before retiring.

Not being in the public eye between fights hasn’t helped GGG, because he’s not being talked about. Golovkin tends to disappear between fights, and he doesn’t give a lot of interviews. For Golovkin to exert pressure on Canelo, he needs to be out in the public, being interviewed constantly to make boxing fans aware that he’s still relevant. Floyd Mayweather Jr. is an exactly of a fighter that keeps himself relevant by talking to the media, and inserting himself into situations. We don’t see that with GGG.