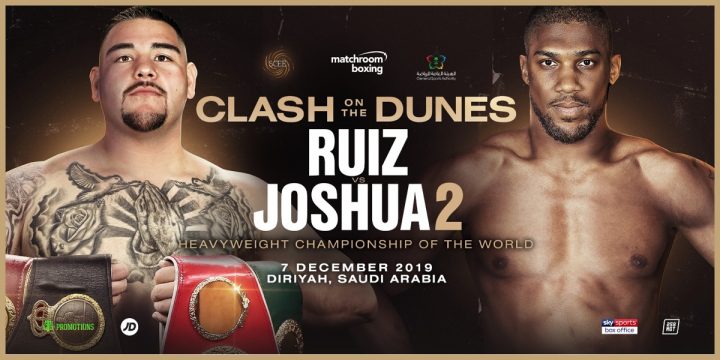 By Charles Brun: Andy Ruiz Jr. said to be holding off on signing for his rematch with Anthony Joshua unless his purse is increased for the fight on December 7, says @MikeCoppinger. Ruiz Jr. (33-1, 22 KOs) is reportedly getting in the neighborhood of $9 million to defend his IBF/WBA/WBO heavyweight titles against Joshua (22-1, 21 KOs) in Riyadh, Saudi Arabia. Joshua is expected to get a massive purse for the fight. It’s being reported that Joshua’s promoter jumped the gun by saying that the rematch was a done deal for Saudi Arabia. With

The question a lot of boxing fans have is why did Joshua’s promoter Eddie Hearn of Matchroom Sport announce the rematch without Ruiz having signed off on it? Was Hearn trying to create public pressure on Ruiz and force him to cave in and sign for the fight?  Joshua’s purse is rumored to be much bigger than the $9 million that Ruiz is said to be getting.

Ruiz Jr. not expected to sign for the rematch unless his purse is increased

With the fight potentially bringing in over $100 million, Ruiz’s purse would be dwarfed by Joshua’s. If Joshua is getting $90+ million, and Ruiz only $9 million, you can understand why Andy wouldn’t be signing off for Saudi Arabia. Ruiz is bringing a lot to the table for this fight, and a 60-40 or 55-45 split would be a better deal.

“Andy Ruiz Jr. isn’t expected to sign off on the rematch in Saudi Arabia unless he’s guaranteed a significantly higher purse than the approximately $9 million he’s guaranteed to fight Anthony Joshua again,” said @MikeCoppinger.”DAZN is in the process of finalizing a deal to stream #RuizJoshua2, but it’s not completed yet, so the fight won’t be promoted on tonight’s Ortiz-Orozco telecast.

Anthony Joshua sits outside Eddie Hearn’s lucrative multi-year deal with DAZN. There are two other networks making a push to acquire the rights to the heavyweight title rematch, but it would be shocking to see #RuizJoshua2 land on another platform given Hearn’s relationship with DAZN. Appears to be a formality that DAZN will steam the fight.”

Next week will be important for Joshua-Ruiz Jr. fight

It’s going to be interesting to see what Hearn does next week if Ruiz still hasn’t signed off for the rematch with Joshua in Saudi Arabia. If Ruiz chooses not to fight Joshua in Saudi Arabia, then Hearn could start to panic. Assuming Ruiz wants a fair split for the rematch, then it won’t matter where the fight takes place. If Joshua is getting the majority of the money for a fight that will make huge cash, Ruiz obviously wants to share in it.

Ever since Hearn announced the Joshua-Ruiz Jr, rematch, Andy has been quiet, which is totally unlike him. Ruiz’s silence has a lot of boxing fans thinking that he’s not in agreement on staging the fight in Saudi Arabia. The money split is another thing that potentially could be keeping Ruiz from signing off on it. The bad part about Ruiz taking the small money for the rematch is that if he beats Joshua, then that’s the likely the end of the rivalry. Joshua and Hearn won’t be willing to make a third fight. Ruiz won’t get a shot at getting a bigger purse split for a third fight, because there probably won’t be one.


« Dmitry Bivol to fight in October