Dmitry Bivol to fight in October 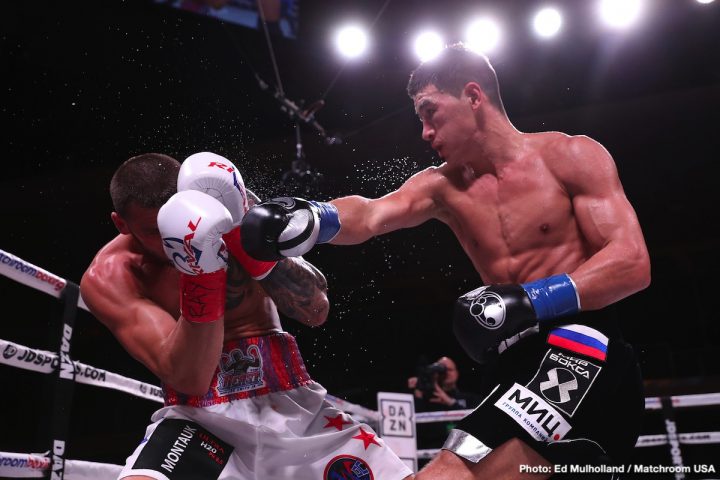 By Allan Fox: WBA light heavyweight champion Dmitry Bivol (16-0, 11 KOs) will be fighting next in October against an opponent still to be determined. The 28-year-old Bivol is about to start his training camp to prepare for the fight.

Bivol is interested in facing the other 175 pound champions in a unification fight, but it’s not likely to happen at this time. He’s read to fight the best when the time comes. The Russian Bivol is coming off of a one-sided 12 round unanimous decision win over the hard hitting Joe Smith Jr. on March 9 in Verona, New York. Bivol survived a scare later in the fight when Smith clocked him after the bell with a hard right to the head that staggered him.

Bivol was able to recover in between rounds, and go on to dominate the rest of the fight. However, the fact that Bivol was hurt by Smith showed that he’s vulnerable to big punchers. Before that fight, Bivol defeated former WBC light heavyweight champion Jean Pascal.

There aren’t a lot of options for Bivol to defend against in terms of high profile contenders. Bivol already beat Pascal, and he recently defeated previously unbeaten Marcus Browne. That would have been an ideal opponent for Bivol to face, but that fight is temporarily derailed. Browne needs to avenge his loss to Pascal for him to be an option for Bivol in the future. To attract interest from the U.S boxing fans, Bivol needs to fight someone they’ve heard of. That means he needs to face a U.S based fighter like Gilberto Ramirez, Jesse Hart or Peter Quillin.

These are some interesting contenders that would be ideal for Bivol to fight in October:

Some of those fighters don’t compete at light heavyweight, but they would still be ideal options for Bivol to fight. It would depend on whether they’re flexible about moving up or down in weight to take on the unbeaten Bivol. Eubank Jr., Ramirez, and Okolie would be perfect opponents for Bivol.

Callum Smith would be a great option as well. The only problem preventing those fights from happening are the promoters for those fighters. They might not be willing to put their guys in with an unbeaten fighter like Bivol. Callum’s promoter Eddie Hearn has mentioned Bivol’s name in the past as an option for the 6’3″ Smith, but he doesn’t seem serious. Hearn is more interested in matching Callum against Saul Canelo Alvarez instead of Bivol. Callum would have a huge size advantage over Canelo, not Bivol. That likely explains why Hearn isn’t eager to make the fight.