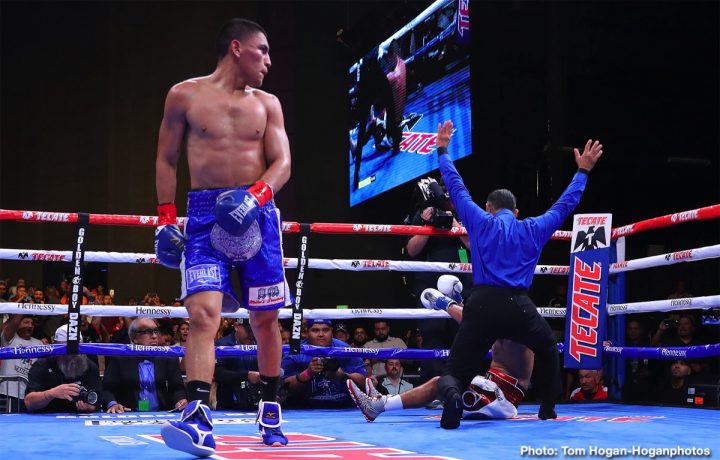 By Matt Lieberman: Unbeaten light welterweight contender Virgil Ortiz Jr. (14-0, 14 KOs) had a harder time than expected in stopping Antonio Orozco (28-2, 17 KOs) in the sixth round on Saturday night to capture the WBA Gold welterweight title at the Verizon Theatre, in Grand Prairie, Texas.

With the fight looking razor close, the 21-year-old banged up Ortiz Jr. showed a sudden surge of energy in dropping Orozco three times in the sixth round to get a stoppage. The referee Mark Calo-oy halted the fight after the third knockdown. Although Orozco like he could still fight, the referee halted it immediately after the 31-year-old was put on the seat of his pants after getting hit by a three-punch combination.

After the fight, Ortiz Jr. admitted that he didn’t fight as well as he should have in the first three or four rounds. He says he’s going to learn from the fight, and come back better.

Vergil Ortiz Jr. not pleased with his performance

“I don’t like the way I fought, to be honest,” said Ortiz Jr. after the fight. “In the first three or four rounds, I could have fought better. We’re going to learn from this, and keep getting better after the fight. I’ve been getting all these knockouts. I think it’s been going to my head. I’m going to learn from this fight. I didn’t go according to the game plan early at the beginning, but I went to the game plan later. I followed it to the end,” said Ortiz.

In the first round, Ortiz Jr. bum rushed Orozco trying to knock him out with a flurry of shots. This resulted in Ortiz gassing out quickly, and taking some huge shots from Orozco. Ortiz Jr. thought he could knock Orozco out immediately, and unloaded with everything he had. Orozco waited until Ortiz used up all his fireworks, and he went after him to finish the round strong.

Orozco fought Ortiz Jr. to a standstill in round 2, 3, 4 and 5. If anything, Orozco looked like he was on his way to winning the contest going into the sixth round. However, Ortiz Jr. came out fast on the sixth, and unloaded Orozco with an unexpected high energy assault that he wasn’t prepared for. Ortiz Jr. knocked Orozco down with a hard right hand to the head.

Ortiz proved to be a great finisher

Moments later, Ortiz Jr. clubbed Orozco to the canvas with some heavy shots. After getting up, Orozco tried to catch Ortiz Jr. with a shot while he flurrying on him, but he barely missed. Ortiz Jr. then dropped him for the third and final time. The referee then steppped in and halted the fight.

All in all, Ortiz Jr. did his job well in coming back strong to get the victory in his first fight at welterweight.