Hearn: Joshua and Ruiz have signed for the rematch 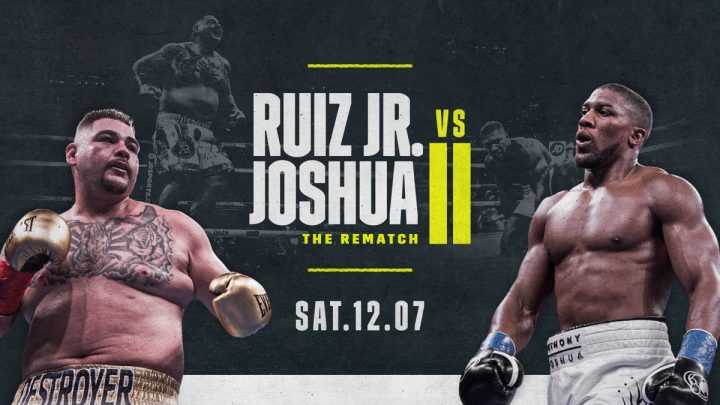 By Kenneth Friedman: Eddie Hearn confirmed on Monday that both Anthony Joshua and Andy Ruiz Jr. have signed for the December 7 rematch that will be taking place in Riyadh, Saudi Arabia. The fight will be held at an outdoor stadium that seats 15,000 fans.

There were rumors that Ruiz (33-1, 22 KOs) didn’t sign off for the fight, and that he’s been holding out for a bigger purse. Hearn says the fight is signed, and ready to go ahead for December 7th in Saudi Arabia.

The Joshua vs. Ruiz rematch will be shown live on Sky Box Office in the UK. DAZN is said to be negotiating with Hearn to have the Joshua-Ruiz rematch streamed in the U.S. However, the time of the rematch won’t be ideal for U.S fans, as it could take place early in the evening on that date. Riyadh is seven hours ahead of the East Coast in the U.S.

“This stadium will be purpose-built for around 15,000 fans, we want UK fans to be there. Organisations bigger than us have taken events to Saudi Arabia. If Saudi are willing to invest in the sport of boxing for the right reasons, I’m in. The whole world will be watching. For Joshua, once you take away the curiosity, you get down to the fight and AJ trying to regain his world heavyweight titles, it will be madness. This will go down in history. This is all AJ is working towards, making sure he is victorious.

“Every promoter in boxing has been in talks with Saudi Arabia, Dubai etc. Mayweather-Pacquaio considered it, this is the first time it will actually happen. I couldn’t believe how good the World Boxing Super Series final was there. Financially, it is viable. Formula One, the European Golf tour, the Italia Cup, the biggest horse racing race, it all happens here. Ruiz had a moan about the UK we said there’s your neutral venue. I’ve kept you waiting and obviously we had this approach, both fighters have agreed and signed for the rematch,” said Hearn.

Ruiz Jr. still hasn’t spoken up to confirm whether the rematch with Joshua (22-1, 21 KOs) will be taking place on December 7 in Saudi Arabia or not. Andy has constantly been Tweeting news on his Twitter account. All of a sudden, he went quiet since Hearn’s announcement of the fight in Saudi Arabia, and that has led to speculation.

Ruiz getting his way with neutral venue

Andy wanted a neutral venue for his rematch with Joshua, and Hearn has given it to him by staging the fight in Saudi Arabia. Putting the fight in such a far away country is going to make it a tremendous hardship for Ruiz and Joshua’s boxing fans to travel that far. It’s going to come down to which fans have the financial means to make the long trip. It’s a lot closer for British fans to travel from UK to Riyadh, Saudi Arabia than it will be for Ruiz’s fans from California in the U.S. England is roughly 4,000 miles from Riyadh. In contrast, Californians will need to travel 8,000+ miles to get to Riyadh to see the fight. Obviously, it’s a much better deal for UK boxing fans. The travel for UK fans is the equivalent of U.S fans traveling from the West Coast to the East Coast. It’s a far better situation for British boxing fans to travel to Saudi Arabia than it is for U.S fans. Hearn might have had that in mind when he chose to have the fight take place in Saudi Arabia.

“Now it’s time for the big one, it’s unexpected but a massive moment for the sport of boxing,” said Hearn. “It is an iconic moment that could change the sport of boxing forever,” said Hearn. “This event will go down in history with the ‘Rumble in the Jungle’ and the ‘Thrilla in Manila. “There will be press conferences in Saudi Arabia, London and New York with the fighters ahead of the rematch. Full details will come in due course. I can confirm that both fighters have signed for this return fight. In terms of the undercard, expect the very best from us. So many fighters want to be part of this iconic event. To fight fans, this will be an experience you will never, ever forget. In particular great news for UK fans, a 9pm start time on Sky Sports Box Office.”

Hearn states that Joshua, 29, isn’t taking the rematch with Ruiz to “cash out” for one final big payday before going off into the sunset. There are a lot of boxing fans that believe that Joshua is taking the immediate rematch as a “cash grab” before walking into the sunset. Ruiz clearly had Joshua’s number in their first fight, and it could be the end of the line for the British heavyweight. A second defeat for Joshua will send his career skittering downwards. Hearn would need to start from the bottom in rebuilding Joshua, because it would be pure lunacy to throw him in with a good heavyweight like Deontay Wilder.

Meng Fanlong – “I respect the Beterbiev – Gvozdyk unification fight but the winner better be ready for me!” »