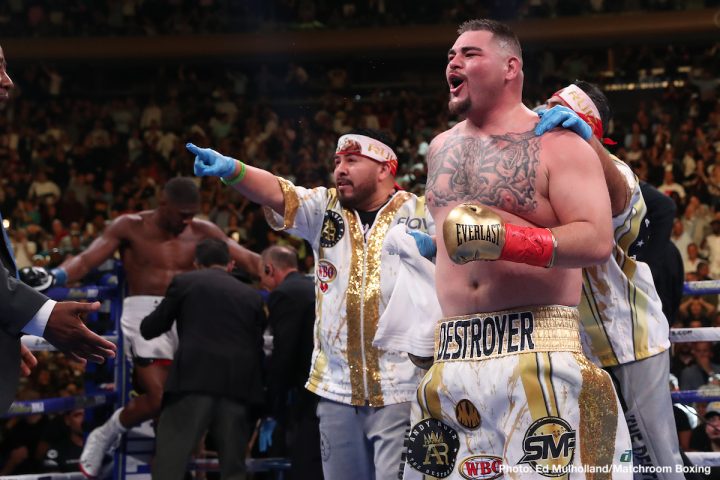 By Dan Ambrose: Andy Ruiz’s trainer Manny Robles says boxing fans need to wait and see what Andy has to say about his rematch with Anthony Joshua. Robles states that Joshua’s promoter Eddie Hearn has gone out on the limb by making a one-sided announcement about the Joshua-Ruiz rematch taking place on December 7 in Riyadh, Saudi Arabia. However, IBF/WBA/WBO heavyweight champion Ruiz (33-1, 22 KOs) still needs to speak to say whether the fight will be taking place then and in that location.

If Matchroom promoter Hearn has “jumped the gun” a little too soon in announcing the news of the location and date for the Ruiz Jr. vs. Joshua rematch, he’s going to look silly in front of the world. What boxing fans want to know is why would Hearn say the Joshua-Ruiz 2 rematch is a done deal when Ruiz and his team hasn’t signed off on it? Is Hearn so eager for a money grab that he would be willing to stage the fight in a location that”ll make it difficult for a lot of Joshua and Ruiz’s loyal fans to make the long trip?

Hearn has been given a huge money offer from Saudi organizers to bring the rematch to that country. Ruiz’s purse is stated to be around $9 million, and Joshua’s purse over $60+ million. It’s rumored to be up to $90 million. That obviously looks bad, given that Joshua is the defeated fighter facing a three-belt world champion. If the purse split is 90-10 in favor of Joshua, then obviously that’s not a great deal for Ruiz. It’s not surprising then that he would want a better deal.

NEWS:   Joshua vs. Fury could be moved to August or September, says Frank Warren

“You haven’t heard anything from Andy Ruiz, and there’s a reason why,” said Ruiz’s trainer Manny Robles to Fighthype. “You’ve got one party saying we’re fighting on December 7th. You’ve got the promoter [Eddie Hearn] going out on the limb saying we’re fighting December 7th in Saudi Arabia, but you haven’t heard anything from the other party, which is Andy Ruiz. Everybody has got to hold off and wait. I don’t have that information. We’re willing to fight any place, anywhere. That’s what a true champion does. If we’ve got to go to Wales or England, let’s say Saudi Arabia or back to New York, then we’ve got to do what we’ve got to do,” said Robles.

Hearn needs to have everyone on the same page for the Joshua-Ruiz match, because right now there appears that it’s not a done deal. Why Hearn would want to make the announcement before the fight is signed off on Ruiz’s side is the magic question.

Joshua will make adjustments for Ruiz

He’s got to come in with his own game plan. And, he’s got to do whatever he’s confident with,” said Robles when asked about his thoughts on Joshua losing weight for the rematch with Ruiz Jr. “He’s got to sit down with his team, and I’m sure he’s going to make adjustments just like we will.

Joshua could be making a mistake in losing weight for the second fight with Andy Ruiz. AJ has been fighting in the 240s for the last five years. It could hurt him to suddenly drop down to the 220s or 230s to get his weight down to what he weighed in the Olympics in 2012.

“You’re going to see a better Andy; slimmer, lighter, quicker, faster, stronger Andy than you did the first time,” said Robles. “If we start today, we’re going to have 16 weeks to prepare, which is four months. That’s all we need for a fight like this. We’re excited. We know from day one that’s what we signed up for. There was a rematch clause where if we won we would have to give Anthony Joshua the immediate rematch. There’s contracts. So we’re going to go with what the contract says. Obviously, we’re going to give him [Joshua] the rematch, because that’s what we signed up for. We keep moving forward.

The most important thing with my fighter is to stay grounded, to keep his feet on the ground, and to stay hungry and go in there and win again. We’re going to win this fight, and get ready to go again. We can’t think ahead, of course. We’ve got to take care of Anthony Joshua next. I want him [Ruiz] to stay focused. I want him to stay grounded, and stay humble. And, I don’t want him to forget where he came from,” said Robles.

Robles says Ruiz Jr. will honor his contract with Joshua, and give him the rematch. However, he admits that he’s not the one that is negotiating the rematch. He’s just the trainer. If Ruiz Jr. and his promoter decides they’re not satisfied with him getting just $9 million for a fight that could potentially bring in over $100 million, then it’s understandable why he would want a better deal.

“I said from day one that a lot of people didn’t believe what I said, and a lot of people laughed at what I said; that Anthony Joshua had never fought a fighter like Andy Ruiz,” said Robles. “A Mexican fighter, that’s what I meant. I wasn’t trying to compare him to Julio Cesar Chavez, Erik Morales or Marco Antonio Barrera. Not for their accomplishments, but of his style of fighting, yes. That’s what I meant. He never fought a fighter like that in the heavyweight division.

I wasn’t wrong. The way he [Ruiz] went to the body. Maybe he needed to go to the body a little sooner than he did the first time. He’s super flexible. That’s something that amazes me. Andy is super flexible. He’s quick, he’s fast. And, he’s a good counter puncher, reaction. He’s got good reaction [time]. We just got to go and continue to build up on that. It would be amazing. I would be awesome,” said Robles when asked if he’d like to see Ruiz Jr. fight WBC heavyweight champion Deontay Wilder after he beats Joshua a second time.

The body shots that Ruiz landed on Joshua in their June 1 fight seemed to have an impact on the fight. Joshua was already reeling from having been hurt by a left hook from Ruiz in round three. When Ruiz Jr. started mixing his shots up in going to Joshua’s midsection, the British fighter looked lost.

“It was a great upset. Having the first Mexican American heavyweight champion in boxing history,” said Joel Diaz to Fighthype. “Obviously, it’s great because he’s Mexican. That’s something that gives a lot of people something to talk about. It’s a great move for the sport of boxing. People are looking forward to the rematch. I’m going to be honest with you. I don’t take anything away from Andy Ruiz.

Out of 100 people you ask if they thought Andy Ruiz had a chance in the fight, I honestly didn’t. I don’t like to be a hypocrite. I tell you how it is. For that fight based on statistics, Andy Ruiz was a replacement, because the previous opponent for Anthony Joshua ended up positive for PEDs.

So bringing Andy Ruiz in as the replacement, 100 percent of the time, he’s just an opponent. So honestly, when I saw that fight in the making, I never gave Andy Ruiz a chance. I see a lot of people saying, ‘I knew he was going to win.’ Honestly, that’s bull-s–t. Just because he won, I’m very happy he won. It’s impressive to see Andy Ruiz show his heart and determination to finish Anthony Joshua the way he did. After the fight, I had much respect for Anthony Joshua. But from the beginning, I never thought he was going to win,” said Diaz.

Diaz wasn’t the only one that thought Ruiz stood no chance against Joshua in the first fight. Practically the entire world saw the fight as a mismatch with Joshua being far too talented and conditioned for the chubby-looking Ruiz to win.

Joshua will win the rematch with Ruiz says Diaz

“Now going into the rematch, I think Anthony Joshua will win, because now he has to make adjustments,” said Diaz. “He has to go back to camp and make adjustments. The reason why is this; in boxing, every fighter steps up to the level of their opposition. On that night, Anthony Joshua walked in against Andy Ruiz thinking, ‘this is an easy fight for me.’ So mentally, he wasn’t ready for Andy Ruiz that was hungry that night. I know coming into the rematch, Anthony Joshua is coming in with a different mentality. ‘This kid [Ruiz] is dangerous. He’s a big talent. Now I have to prepare myself differently, and come to the fight with a different mentality. This guy is very dangerous.’ That’s how I see it, and I could be wrong, but that’s my prediction.

What Diaz says about Joshua having overlooked Ruiz makes perfect sense. So many boxing fans had told Joshua that it was going to be a walk in the part for him to beat Ruiz, that he naturally saw him as a non-threat, and looked beyond the fight. Joshua (22-1, 21 KOs) was looking ahead to the fight with WBC heavyweight champion Deontay Wilder, and not thinking of Ruiz at all. If Joshua had been focused on the Ruiz fight, it would have been a different story, and perhaps a different outcome.

“There was a couple of things Andy Ruiz did that night,” said Diaz. “He landed a couple of shots on the right spot that didn’t let Anthony Joshua recover through the remainder of the fight. So that’s what happened.  Hopefully, it’s a greater fight than the first one. I wish Andy Ruiz the best. If he wins, I’ll be happy, because he’s a Mexican American fighter. I take nothing away from Anthony Joshua as well.

After Joshua was hurt in the third, he couldn’t shake the effects from that to fight effectively. Joshua’s trainer Rob McCracken might as well have stopped the fight soon as became clear that his punch resistance was gone from the third, because he never stood a chance. It was like watching the first fight between Terry Norris and Simon Brown in 1993. Once the unheralded Brown had Norris hurt in the fourth, there was no way for Norris to recover. Brown subsequently stopped Norris to pull off a huge upset. In the rematch, Norris easily won a lopsided 12 round unanimous decision in 1994.