Golovkin vs. Derevyanchenko close to being finalized for Oct.5 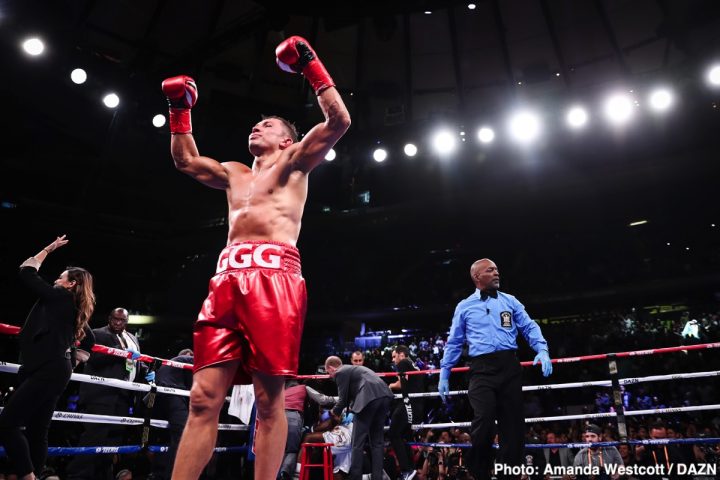 By Sean Jones: Gennady Golovkin and Sergiy Derevyanchenko are close to having a contracts drawn out for a fight on October 5 on DAZN at Madison Square Garden in New York, says Mike Coppinger.  Golovkin (39-1-1, 35 KOs) and #1 ranked IBF contender Derevyanchenko (13-1, 10 KOs) will fight for the vacant International Boxing Federation middleweight title that was stripped from Saul Canelo Alvarez.

The Golden Boy Promotions star Canelo failed to meet the IBF’s deadline to negotiate a title defense against mandatory Derevyanchenko. It was a bad deal all around for the IBF, Canelo and Derevyanchenko. So instead of superstar Canelo defending against the 33-year-old Derevyanchenko, GGG will be the one facing the 2008 Ukrainian Olympian.

Derevyanchenko is an excellent fighter, but he was recently beaten by Daniel Jacobs last October by a 12 round unanimous decision. For whatever reason, the IBF chose to throw Derevyanchenko another bone by allowing his next fight against Jack Culcay to be an IBF title eliminator. That was a controversial move by the IBF, because Derevyanchenko had just lost his previous fight to Jacobs in a match for the vacant IBF middleweight title. Instead of the IBF letting another contender in their top 15 battle Culcay in an official eliminator, they allowed Derevyanchenko to get right back in there for a second try.

Where it could get ridiculous is if the IBF let’s Derevcchenko get a third try for their title if he loses to Golovkin on October 5, which is very likely to happen. Derevyanchenko is a good fighter, but not in the league of Golovkin. Unless Golovkin got old over night, he’s going to batter Derevyanchenko and likely knock him out.

Derevyanchenko needs to raise his game

For Derevyanchenko to have a shot at beating GGG, he’s going to need to look better than he has in his biggest fights in his career. Derevyanchenko struggled against Jacobs, Culcay and Tureano Johnson. Those are the only good fighters that Derevyanchenko has fought during his five-year pro career. The rest of the guys he’s fought have fodder-level opposition, and not quality fighters. Derevanchenko was soundly beaten by Brian Carlos Castano by a 3-0 score in 2012/2013 in the World Series of Boxing. Castano took the fight to Derevyanchenko, and beat him at his own game.

If Golovkin fights like that against Derevyanchenko, the contest won’t last long on October 5. Derevyanchenko will fall apart under that kind of an assault from Golovkin. Although Derevyanchenko is 33, he doesn’t look like a young fighter. He looks closer to 40 than someone approaching his mid-30s, and the 37-year-old Golovkin might be the younger guy physically.

“Sources: A deal is imminent to match GGG and Sergiy Derevyanchenko in a middleweight title bout on DAZN, and contracts are being drafted. In order to maintain Oct. 5 date at MSG, deal needs to be closed in coming days,” said @MikeCoppinger.

IBF title important for GGG to get Canelo trilogy fight

To stay in the hunt for the trilogy fight against a reluctant Canelo Alvarez, Golovkin needs to capture the IBF middleweight title. Canelo wants Golovkin to win a world title before he looks for a third fight, and now he’s got the chance to make that a reality in facing Derevyanchenko. Although it’s a forgone conclusion that Canelo and Golovkin will meet up eventually on DAZN, it helps GGG if he can capture the IBF title in October. Golovkin can speed up the pace of getting the Canelo trilogy match.

Boxing » News » Golovkin vs. Derevyanchenko close to being finalized for Oct.5