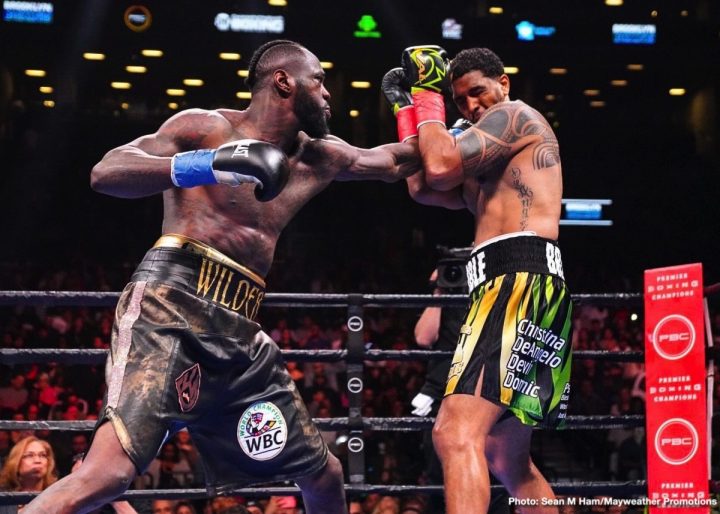 By Charles Brun: WBC heavyweight champion Deontay Wilder’s rematch with Luis Ortiz (31-1, 26 KOs) has to take place by the end of November, and the fight is starting to look iffy. The dates for for the Wilder-Ortiz fight keep moving into the future.

At this point it wouldn’t be surprising if the Wilder vs. Ortiz rematch doesn’t take place at all. Tyson Fury has already revealed that rematch with Wilder (41-0-1, 40 KOs) is signed for February 22 in Las Vegas, Nevada. That date means that it’s going to be a quick turn around for Wilder if he defends against the 40-year-old Ortiz in late November.

Wilder with little time to rest after Ortiz rematch

That would be just three months for Wilder to recover, train and promote his next fight against Fury. That’s cutting it close, and it won’t give Wilder much time to rest from what could be a tough fight against Ortiz. The quick turn around makes it problematic for Wilder to take the Ortiz rematch at this time.

If Wilder was facing a soft touch like Fury’s next opponent Otto Wallin, then it wouldn’t be an issue. Fury’s promoters at Top Rank found Wallin (20-0, 13 KOs) among the contenders in the division, and he’ll be facing him on September 14.   This is Fury’s second opponent with an arguably inflated record.

In Fury’s previous fight, he defeated an obscure German fighter Tom Schwarz last June in stopping him in the second. Schwarz looked so bad that Fury came out of the fight being criticized rather than complimented by boxing fans. It appears that Wallin is the same type of heavyweight as Schwarz. This is disappointing, because Fury is bragging that he’s the best fighter in the division.

Deontay Wilder’s rematch with Luis Ortiz must take place by the end of November, according to the contract the champ signed for his rematch with Tyson Fury, industry sources tell The Athletic. Wilder-Fury 2 will be a joint ESPN/FOX PPV and is slated for Feb. 22

“Ortiz is 147-years-old,” said Tyson Fury to the Fight Guys. “We don’t know how old he is. We know he’s got no legs left, and he’s already been knocked out by Wilder. I see Wilder getting him out in four rounds,” said Fury in predicting the Wilder-Ortiz rematch.

There’s a fair chance that Wilder does KO Ortiz by the fourth round, but that’s not because the Cuban fighter isn’t a worthy opponent. Ortiz is talented, and he’s been avoided by a lot of the top guys in the division. Fury never showed interest in fighting Ortiz, and Anthony Joshua and Dillian Whyte haven’t looked his way. Ortiz would be a huge favorite if he were to face Otto Wallin or Tom Schwarz. It doesn’t matter that Ortiz is 40. He’s still a much better fighter than the guys that Fury is facing nowadays.

“I think I was in space for four seconds, but like I say, if there’s an ounce of breath in my body, I’ll up and continue to fight,” said Fury about his 12th round knockdown against Wilder. “That’s just how I’ve been taught. I’ve been punched before, knocked down before, and I get up and win. That’s what I do. It’s no biggie for me to get up and fight back. I was born fighting. I’ve fought all my life, and I’ll continue to fight until I can’t fight anymore. I got punched in the face,” said Fury in talking about being dropped by Wilder in round 12 last December. I shouldn’t have took that punch, but whatever. It was what it was. I can’t wait for the rematch, and I’ll get it all right,” said Fury.

It looked more like Fury was unconscious for five seconds, not four, after Wilder knocked him down in round 12 last December. What’s troubling is how the referee was looking at the crowd, and then at Wilder after Fury was knocked down. It took the referee awhile to go over to Fury and start a count. As badly hurt as Fury was, why was there a count?