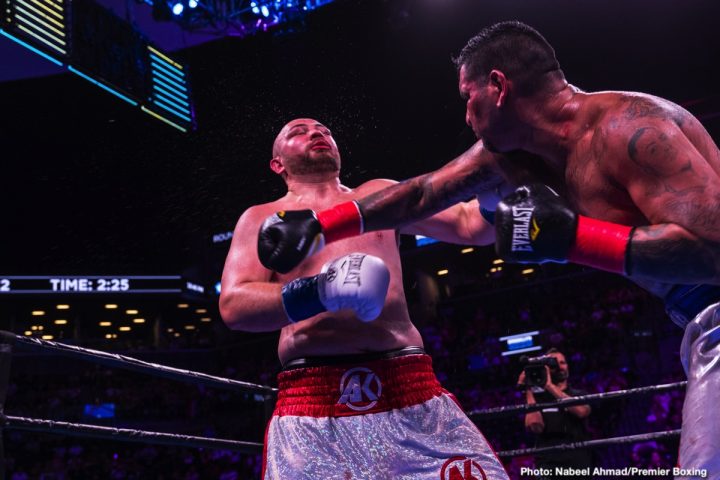 By Jim Dower: Chris Arreola (38-6-1, 33 KOs) isn’t sure whether he’s going to retire yet a day after losing to Polish heavyweight Adam Kownacki (20-0, 15 KOs) by a 12 round unanimous decision in a thrilling fight last Saturday night on Fox Deportes at the Barclays Center in Brooklyn, New York.

Kownacki was fighting in front of large pro-Kownacki crowd in his hometown for the fight. With the boxing fans on Kownacki’s side, it’s not surprising that the judges scored it so side in his favor. The reality is that the fight was closer.

This was a wider score than many of the boxing fans saw it. A lot of them saw it as a narrow 115-113 win for Kownacki if not a draw. Kownacki, 30, was busier, but Arreola landed the harder shots. What was significant about that is that Arreola was forced to use his right hand for all his power punching in the second half of the fight.

Arreola to think over retirement

“Retirement is something I need to talk to my family and team about,” said Arreola. “I gave it my all this fight. I let it all hang out. After breaking my hand, I kept fighting because I believed I could win.

“I lost. This isn’t how I wanted to go out, but I gave it my all,” said Arreola to Fighthype . “I broke my hand, and kept coming. That’s boxing though. I was trying to make the Polish fans my fans. I changed my strategy a little, and started using my right hand,” Arreola said in talking about what he did differently after breaking his hand.  We were in the proverbial phone-booth beating the s–t out of one another. It was a fun fight for me. It was a fun fight for him. Body, body, body and him, that was the plan,” said Arreola.

If Arreola does decide to retire from this fight, he’s going out on a high note, because he made it an exciting fight with his nonstop pressure that he was putting on the unbeaten Kownacki. Arreola will be in demand for a lot of the top heavyweight contenders after his performance against Kownacki. It’ll be hard for Arreola to resist continuing his career if he gets some nice payday offers. But being used as an opponent might not result in Arreola being offered a whole lot of money, unless he’s in a main event like last Saturday night.

“Adam is relentless,” said Arreola. “He just keeps coming. I know I got him with some good punches and he got me with some good ones. I was more than ready to go all 12, but Adam came in and won the fight.”

One of the main reasons why Arreola-Kownacki broke the record for punches throw is because Kownacki just coming forward the while fight, and not letting up for an instant. Kownacki was throwing a lot of arm shots, because he was exhausted in the second half of the fight. But never the less, the 266 pound Kownacki still threw with respectable power for a fighter that was throwing arm shots. He forced Arreola to answer him back, because if he’d just taken the shots, he would have been stopped. The referee would have had no choice but to stop the fight if Arreola couldn’t keep up with Kownacki’s high volume punch output.

In the exciting co-feature bout, Jean Pascal (34-6-1, 20 KOs) upset interim WBA light heavyweight champion Marcus Browne (23-1, 16 KOs). An accidental head-butt in round eight resulted in Browne getting cut badly over his left eye. The blood was gushing out, and it left the referee Gary Rosato no choice but to stop the contest. The fight was officially stopped at 1:49 of round eight. Pascal got the victory due to him scoring three knockdowns in the fight. He dropped Browne once in round four, and two more times in round seven.

Early on in the fight, Browne got the better of Pascal with his hard jab, and nice two to three-punch combinations. Browne was getting away with throwing combos early, but Pascal started to take advantage of his bad habit starting in the fourth round when he dropped him with a right to the head. Browne landed with a lot of accuracy in connecting on 52 percent of his power punches.

The beginning of the end for Browne came in the fourth when got caught by a hard right from Pascal that knocked him down. This wasn’t a flash knockdown. Browne was really hurt, and he staggered after he got back up.  Browne threw a right hand at the same time Pascal did, but he wasn’t ready for the Canadian based fighter’s heavy shot. 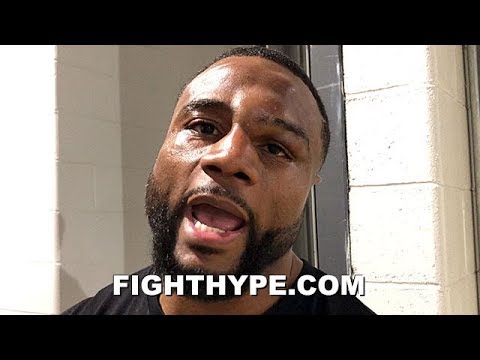 “I’m super happy. I did it,” said Jean Pascal to Fighthype about his victory over Browne. “I was the underdog. With hard work anything is possible. We knew Marcus Browne was younger than me. He was sleek, fast, and knew I would catch him in the later rounds, I had to be patient, not to swing too much.

As the rounds progressed put more pressure and pressure, and that’s what I did. I caught him twice, and I dropped him twice. He doesn’t punch hard like [Sergey] Kovalev or Carl Froch. But he’s an exciting fighter, and he’s very talented,” said Pascal.

Browne is known for being a good puncher, but Pascal has faced harder throwers than him obviously. Not many boxing fans were giving Pascal a chance of winning the fight going into this match.

Pascal knew his experience would be too much for Browne

“In boxing, you need more than skills,” said Pascal. “You need heart, guts, everything. I got under his skin,” said Pascal in talking about the trash talking that he did with Browne in the build up to their fight. “I’ve been there, done that. I know from my experience that I’d be able to get him, and that’s what I did tonight. I hope he gets better, and can learn from the fight and come back stronger,” said Pascal.


« Spence eager for Pacquiao but Roach doesn’t like idea