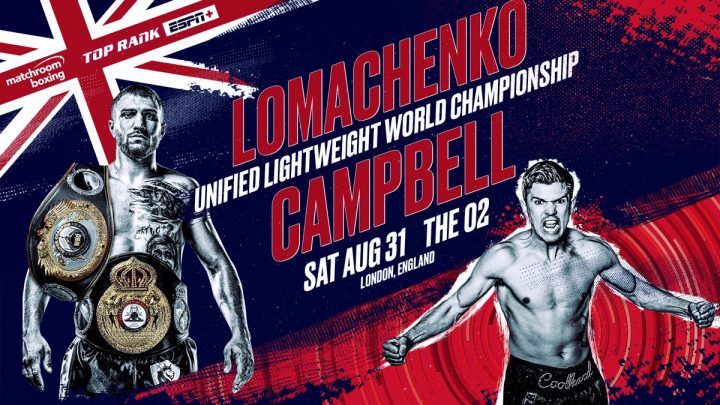 By Trevor McIntyre: Anthony Crolla is predicting Vasiliy Lomachenko will have problems dealing with the talent of Luke Campbell early on in their fight on August 31 at the O2 Arena in London, England. Lomachenko (13-1, 10 KOs) and the twice beaten Campbell (20-2, 16 KOs) will be battling for the vacant WBC lightweight title on the night. Lomachenko-Campbell will be televised on Sky Sports Box Office in the UK.

This is Campbell’s moment in the sun for his six-year pro career. He’s been waiting all this time for a big fight, and now one has been thrown into his lap by virtue of the World Boxing Council granting a petition by Lomachenko to allow him to fight for the vacant WBC lightweight title. It’s a rare thing for a sanctioning body to grant permission for another world champion to fight for their vacant titles.

Lomachenko fighting for WBC title ahead of Haney

The WBC is giving Lomachenko a real gift at the expense of #2 WBC Devin Haney, who should be the one that is facing Campbell for the vacant lightweight title. Haney has been given backseat by the WBC, and it’s not even certain that he’ll be able to fight Lomachenko if he wins the vacant belt.

Lomachenko’s promoter Bob Arum of Top Rank is already floating the idea that Loma could be given the Franchise tag by the WBC shortly if he beats Campbell, and then defeats either Richard Commey or Teofimo Lopez to win the IBF lightweight title in the unified championship.

Crolla thinks the 5’9″ Campbell has the better attributes of the two, but he still sees him losing to the 31-year-old Lomachenko.

If the southpaw Campbell does win, it would be a major upset, even bigger than Lomachenko’s loss to Orlando Salido in 2014. In that defeat, Lomachenko was fighting a real warrior with tons of experience as a pro. Campbell has very little experience in the pro ranks aside from his fights against Jorge Linares and Yvan Mendy, and he lost to both of those guys.

The two-time Olympic gold medalist Lomachenko, who comes from Ukraine, already has the WBA/WBO 135 pound titles in his possession.

Crolla (34-7-3, 13 KOs) was recently on the receiving end of a bad beating from Lomachenko last April at the Staples Center in Los Angeles, California. It didn’t go well at all for the 32-year-old Crolla, who was beaten and battered in getting dropped twice before the bout was stopped in the fourth round. Lomachenko knocked Crolla down once in round three and four.

Crolla says Campbell has the better tools than Lomachenko

“I believe it’s the toughest test in boxing, and I experienced it first-hand,” said Crolla to skysports.com about Lomachenko. “And, I think Luke has the better tools for the job than what I had stylistically, and I think for the first sort of three rounds or so, he might have a little bit of success. I think he’ll keep it long, but I do believe at some point in the fight, Lomachenko will catch up with him. I think he’s the complete fighter – speed, defence,” Crolla.

Crolla sees Lomachenko as almost unbeatable, but he believes Campbell can still give him problems. Few boxing fans would agree with Crolla’s statement about Campbell having the better tools than Lomachenko. Campbell does have a lot of technical skills to go along with his punching power, but he’s not as versatile as Lomachenko.

What Campbell, 31, has going for him is his punching power and home advantage. He also also has less mileage on him than Loma. The Ukrainian fighter fought close to 400 fights during his amateur days, and although he lost only one fight, he was still hit a lot. Lomachenko finished his amateur career with an impressive 396-1 record.

“He hits harder than you expect as well. He varies the power up very well and just so clever, so clever at reading fighters. No man’s unbeatable, but he’s close to it,” said Campbell about Lomachenko.

Lomachenko doesn’t load up a lot on his shots like a lot of fighters do, and that explains why he doesn’t score highlight reel knockouts. Although Lomachenko has knocked out 71% of his opponents as a pro, a lot of those stoppages were cases where he forced them to quit out of frustration. In several of Lomachenko’s most notable fights against Crolla, Jorge Linares and Roman Martinez, he was able to knock them out. It’s difficult to predict how Lomachenko will choose to fight Campbell. He could sit down on his shots like he did against Crolla or he might choose to throw pitty-pat shots all night long to humiliate and frustrate Campbell into quitting.

“I really believe Lomachenko is a greatest fighter since a young Muhammad Ali,” said Lomachenko’s promoter Bob Arum to IFL TV. “No matter how good of an opponent he fights, I have to side with Lomachenko. That being said, I think Campbell is a very accomplished fighter.

You don’t win an Olympic gold medal, particularly if you don’t come from an Eastern country without being an excellent fighter. So he has a tremendous amount of skills, and I think it’s going to be a great, great fight. But in my opinion, there’s only one inner, and that’s Lomachenko. But certainly, Campbell is qualified to fight Lomachenko. He’s a terrific fighter,” said Arum.

Lomachenko’s promoter Arum sees him on the same level as a young Ali, but he lacks the popularity that the former boxing great had. Ali was different. He was willing to put himself in harms way to batter his opponents into submission. Lomachenko puts too much focus on not getting hit, and it can make it boring to watch him fight at times. In his recent fights against Crolla and Linares, he was more entertaining, because he made an effort to mix it up. Against Campbell, it’s tough to try and predict how Lomachenko will choose to fight. He needs to sit down on his shots, and look to score a knockout of Campbell if he wants to win over the British boxing fans.

Warrington: “I Would Give Shakur Stevenson 12 Rounds Of Hell! »