Warrington: “I Would Give Shakur Stevenson 12 Rounds Of Hell! 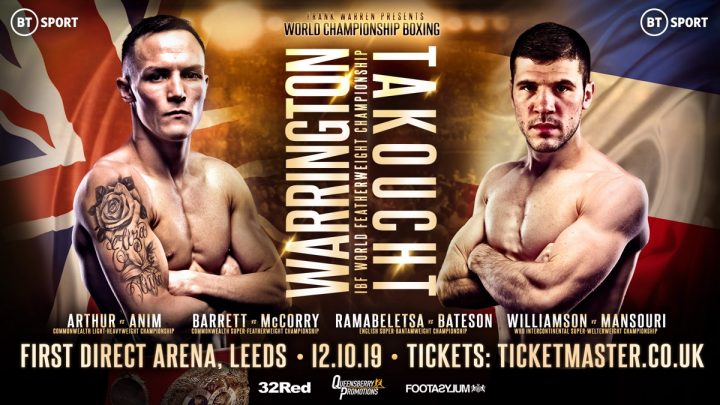 JOSH WARRINGTON will be back home in Leeds when he defends his IBF world featherweight title against number four ranked Sofiane Takoucht at First Direct Arena on Saturday October 12, live on BT Sport

Warrington (29-0, 6KOs) who will be making the third defence of his championship faced off with French challenger Takoucht (35-3-1, 13KOs) at a press conference today.

Here are a selection of quotes from the media event and details of a magnificent undercard featuring some of Britain’s best young boxers.

JOSH WARRINGTON: “I hoped for a unification, but that isn’t mine, my management or Frank Warren’s fault. None of the champions seem to want it. I have to stay active so we’re back in Leeds. Some of my fans had money saved to go and watch me in America and Frank really tried. I am hoping to get through this one and it happens. All I am doing is concentrating on keeping my title, but ultimately my dream is to unify. I just want to win a unified title against one champion and I will then fight anyone until the cows come home. Takoucht has a massive opportunity and he has been given a golden ticket. Takoucht knows he has a massive opportunity in my back yard and it would be ridiculous to think this is a given. I am not there to make a statement, but show that if I step up to any of the other champions I beat them. The fire is in my belly. I want a performance and must beat people like this is style. I would be disappointed if it was a long drawn out points win. I want to get it done quickly. Michael Conlan is making big waves, but I want the other champions then I will fight the likes of him. I’m coming up to ten years as a professional. The support has just grown and grown and inspired young fighters in Leeds. The journey hasn’t finished. I would love the WBA champion Leo Santa Cruz and if Shakur Stevenson wins the WBO title I would line him up and give him 12 rounds of hell, but it’s this fight against Takoucht I’m thinking about.

SEAN O’HAGAN (Warrington’s father and trainer): “Takoucht is a very experienced fighter and the highest ranked fighter available at number four. It is a genuine fight and one where we know we have to raise our game and keep the momentum going until the super fights come. Takoucht is very capable and we are taking him serious. He has plenty of grit, is durable, can box, fight or be evasive. He has a bit of everything and it makes for a good fight. We had a bad night at the office against Galahad and still won. Anthony Joshua had a bad night and got leathered. We always enjoy fighting in Leeds and this time we have an opponent who wants to fight.”

SOFIANE TAKOUCHT: “This is a childhood dream for me since I started boxing at ten years old. Winning this would change everything and I hope it brings me recognition. Josh is a great champion and this is a wonderful opportunity. I will show myself in a good light.”

ALAIN VASTINE (Takoucht’s trainer): “Nothing is given in life so we are coming here to win, nothing else. We have an opportunity and it’s up to us to grab it and we will do everything to get it. Sofiane has courage, determination and a big heart. We know that Josh has the support, but it has been like that before in the Ukraine, but we are coming to win and will win.”

Josh Warrington vs Takoucht in Leeds on October 12, live on BT Sport

Warrington (29-0, 6 KOs) will be returning to the venue he has lit up throughout his career and where he defeated then mandatory challenger Kid Galahad in June.

The big world title fight will be backed up with a magnificent undercard featuring some of the finest young talent in British boxing – all in title action.

Leeds idol Jack Bateson, Barrett’s stablemate Lyndon Arthur and Troy Williamson will all challenge for their first professional championships on the bill.

Bateson (10-0, 3KOs) who sold £60,000 worth of ticket when he boxed on the Warrington-Galahad bill challenges Preston’s Michael Ramabeletsa (17-17, 8KOs) who will be making the first defence of his English super-bantamweight belt.

Manchester’s KO King, Arthur (15-0, 12KOs) who is being talked of as a future Anthony Yarde opponent faces Ghanian Emmanuel Anim (14-2-1, 12KOs) for the vacant Commonwealth light-heavyweight title, in a battle of the big hitters.

In the fifth championship clash Darlington’s Williamson (11-0-1, 8KOs) takes a step up in class when he meets Rotherham’s Nav Mansouri (20-2-2, 6KOs) for the vacant WBO Intercontinental super-welterweight belt.

Warrington, 28, said: “From what I’ve seen, Takoucht is tough and got his IBF ranking through hard work.

“This is a massive opportunity for him. I have to stay focused and not take my eye off the ball because I am after the biggest fights in the division.”

Promoter Frank Warren explained: “We wanted to make the Oscar Valdez unification fight for Josh, but he is giving up the WBO title and moving up in weight.

“I know how much Josh wants the WBA champion, Leo Santa Cruz but he doesn’t seem keen right now.

“If you look at the IBF Ratings number one and two are vacant, and Takoucht was pretty much the next available contender.”

Warrington won his world title in an upset points win against defending champion Lee Selby in May 2018 when 25,000 fans packed into Elland Road to support him.

Last December he defied the bookies odds again when he thrashed two-weight world champion Carl Frampton on points in his maiden defence. He followed that up with the Galahad victory.

Takoucht is on a eight fight winning streak and won the IBF International title to earn his place among the world’s top featherweights.

Southpaw Takoucht, 33, said: “When the call came to travel to Leeds and challenge Josh I said, ‘yes’ straight away. It’s a chance to beat the best featherweight in the world.

“He beat Lee Selby when nobody thought he could win and then a great fighter, Carl Frampton. It was close against Kid Galahad, but he found a way to win.

“I am sure he will look at me and think I am easier than his last three opponents, but I won’t let this opportunity go. Get ready for a shock.”

Boxing » Press News » Warrington: “I Would Give Shakur Stevenson 12 Rounds Of Hell!