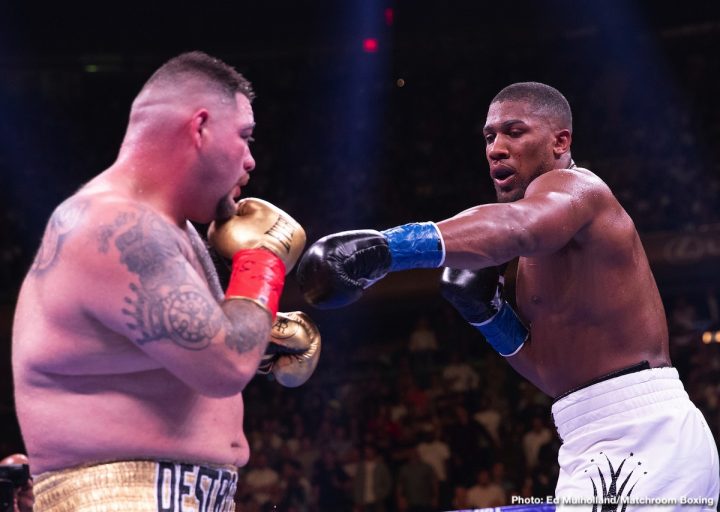 By Mark Eisner: The United Arab Emirates has emerged as a possible neutral venue option for the Andy Ruiz vs. Anthony Joshua rematch. There’s been a “lucrative offer” made by the organizers over there that want to stage the Joshua-Ruiz rematch, according to @MikeCoppinger. Now it’s up to Joshua, and his promoter Eddie Hearn to decide whether it’s worthwhile to take the fight with Ruiz Jr. in that location.

For Joshua, it’s a risky move for him to travel to United Arab Emirates to fight Ruiz (33-1, 29 KOs). Joshua (22-1, 21 KOs) has fought only once outside of the UK during his six-year pro career, and that was disastrous seventh round knockout loss to Ruiz last June.

This fight against Ruiz is important for Joshua, and he can’t afford to lose. Presumably, this would be a money-driven decision by Joshua and his promoter Hearn to stage the rematch with Ruiz in the UAE. The location would in neutral territory, which s what Ruiz has been asking for, but it’ll make it difficult for boxing fans to travel.

The way Joshua looked mentally out of sorts against Ruiz last June, it’s clear that he needs to fight in the UK. Some fighters do well on the abroad, but Joshua doesn’t look like he fits that category. He’s the type of fighter that responds better in front of his cheering fans in the UK. There’s a good possibility that Joshua will lose to Ruiz if the fight takes place in the UAE. Some would say that Joshua is insecure, and fragile mentally as a fighter. Former heavyweight world champion Lennox Lewis went so far as to say that Joshua has mental problems that he needs to deal with before he fights Ruiz again.

Joshua and Hearn have control over the location of the fight, as they have it in the contract.

AJ questioned his own talent after his loss to Ruiz

It’s pretty clear that Joshua has some mental demons that he needs to take care of before he looks to fight Ruiz again, but he’s not going to get that help in time. The Joshua vs. Ruiz rematch is expected to take place in three months from now in November, and that’s not a lot of time for AJ to get help. Moreover, it’s not much time to promote the fight. Hearn should have already made up his mind where the location of the fight would take place, so that they could have already started promoting it.

Ruiz is already talking about the rematch not taking place in the UK, and that means it’s already in motion for the contest to take place in a neutral venue. Although it’s not a good idea for Joshua to be fighting outside of the UK, at least he’ll get credit from the boxing world if he wins.

If the rematch takes place in the UK, the fans from elsewhere around the world will have a lot to say about the referee and the judging of the fight. There would be a lot of potential areas for the fans to attack Hearn, Joshua and Matchroom by saying Ruiz was robbed if he doesn’t win. It’s obviously not good that the timing of the rematch is occurring after the recent Dillian Whyte vs. Oscar Rivas fight.

Ruiz and his management will want to make sure that they’re paid if the fight takes place in the UAE. It would be bad news if Joshua-Ruiz rematch takes place in UAE, and the fighters have complaints later about their pay.