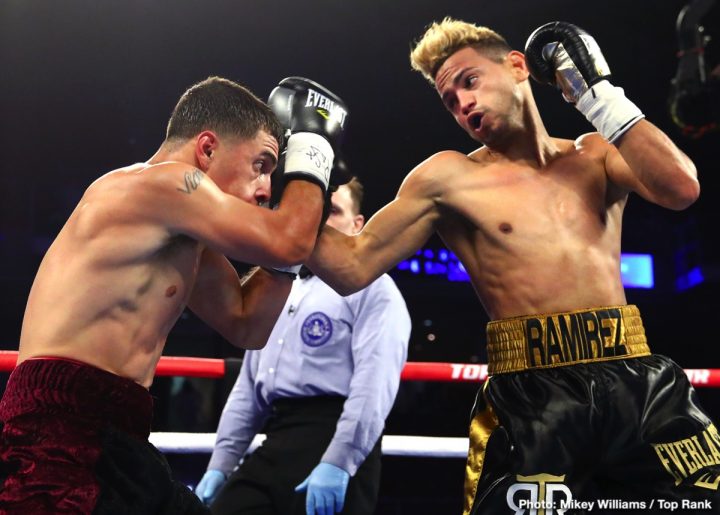 By Chris Williams: Two-time Cuban Olympic gold medalist Robeisy Ramirez (0-1) shockingly lost his pro debut to featherweight Adan Gonzales (5-2-2, 2 KOs) by a four round split decision last Saturday night on ESPN at the Liacouras Center in Philadelphia, Pennsylvania. The 25-year-old Robeisy was knocked down in round one by Gonzales.

Although Ramirez fought well at times in landing nice shots, the younger 22-year-old Gonzales was the busier fighter in letting his hands go. Gonzales’ trainer had obviously done his homework, and spotted the weakness in Robeisy’s game. In the Olympics, the Cuban fighter struggled against opponents that threw a lot of shots.

The scores were 40-35, 39-36 for Gonzales, and 38-37 for Robeisy. Boxing News 24 scored it 40-35 for Gonzales.  Robeisy had problems with the volume punching from Gonzales, who kept him on the defense the entire fight with his machine gun shots. Gonzales’ punches weren’t huge, but they were constant, and this prevented Ramirez from getting his shots off. Robeisy is one of those fighters who likes to take turns throwing shots.

Ramirez has a bad habit if waiting for his opponents to stop throwing before he throws. In the pro ranks, fighters need to be able to punch in between, and counter their opponents. Robeisy doesn’t know how to do this, which is why Gonzales was able to keep him on the defensive their entire four-round fight. Gonzales never stopped throwing punches, and that had the effect of bottling up Robeisy’s offense.

Robeisy Ramirez thinks he should have won

“I feel like I won that fight. He may have been throwing more, but I was the one landing the cleaner punches. This is a setback, but trust me, I will be back,” said Robeisy after the results were announced.

Top Rank Boxing promotions may have made a mistake in signing Robeisy, because he’s not the same fighter he was in the amateurs. Robeisy won Olympic gold medals at flyweight [108 pounds] and bantamweight [118 lbs] in 2012 and 2016. He’s starting to fill out now, and looking chunkier than he did when he was dominating in the amateur ranks. At the same time, Robeisy’s punching power hasn’t kept pace with his weight gain, and neither has his punch resistance.

The power isn’t there for Robeisy at 126

At 126, Robeisy lacks the power, work rate and the chin to excel in this weight class. If Top Rank can’t get Robeisy to drop down to 118 or 112, they might be stuck with a guy that is going nowhere. It’s unlikely that Robeisy’s punching power will improve to any great extent, because he’s never been a huge puncher. He’s not the same type of talent that we saw from two-time Olympic gold medalist Vasiliy Lomachenko when he turned pro in 2013.

Top Rank might need to cut Robeisy loose if he fails to improve as a fighter, because right now looks he lacks the talent to go anywhere as a pro. The warnings signs were already there when Top Rank signed Robeisy, because he’s been looking chunky, and not the slim fighter that he was in the Olympics. Robeisy has been eating well obviously, and packing on the pounds. If Top Rank has an escape clause in their contract with Robeisy, then they can perhaps dump him early if he fails to pan out. But first, they need to exhaust their efforts to see if he can improve by getting him to drop some weight.

Losing weight is a must for Robeisy

Robeisy should be fighting at no higher than 118 pounds in this writer’s opinion, and ideally at 112 lbs. He would do well fighting at flyweight, because that was when he was at his absolute best in the amateurs in winning a gold in the 2012 Olympics. Both of Robeisy’s Olympic gold medals were razor close victories. He beat Tugstsogt Nyambayan (Mongolia) 17-14 in the 2012 Olympics. In 2016, Ramirez edged Shakur Stevenson (United States] by a controversial 2-1 score to win a gold. A lot of boxing fans thought Shakur deserved the win, as did this writer.

“When they announced a split decision, I knew I better have won that fight or something would have seriously been wrong,” Adan Gonzales said. “I attacked him from the start, and I got the win. You ain’t seen the last of me.”

There’s no word yet from Top Rank if they plan on setting up a rematch between Robeisy and Gonzales. This is obviously a tough fight for Robeisy to walk away from, because it was supposed to have been a mismatch. Robeisy was considered a blue-chip prospect coming into this fight against the unheralded Gonzales. In other words, Robeisy wasn’t supposed to lose to this guy. Gonzales had been beaten in the past by Jose Gonzalez and Abdur-Raheem Abdullah (3-3) during his four year pro career. He also had two draws against Mario Sierra and Jose Gonzalez. If Robeisy moves on without avenging this loss, it’s going to being a bad omen for his career.

The way that Ramirez fought last night against Gonzales, he was still using the same amateur fencing style that he employed throughout the Olympics. That style isn’t made for the pro ranks. Some fighters like Oleksandr Usyk can still find success using the amateur style, but it doesn’t work well for most fighters that turn pro. You can argue the only reason Usyk has had success in the pros is because he hasn’t fought anyone good yet. He was losing to Tony Bellew in his last fight before the British fighter got tired, Ramirez has got to change his game, lose weight, and find some punching power somehow.

Robeisy’s boxing fans have come to his defense on social media, saying that Lomachenko lost his second pro fight against Orlando Salido in 2014. However, there’s a world of difference between the talent that Salido had going for him back then compared to Adan Gonzales. Salido was a major talent in 2014, whereas Gonzales is just good basic B-level fighter. The Salido that beat Lomachenko would have likely knocked Robeisy out if those two had fought last Saturday night. Robeisy isn’t cut out for the grueling type of fights that Salido was known for.