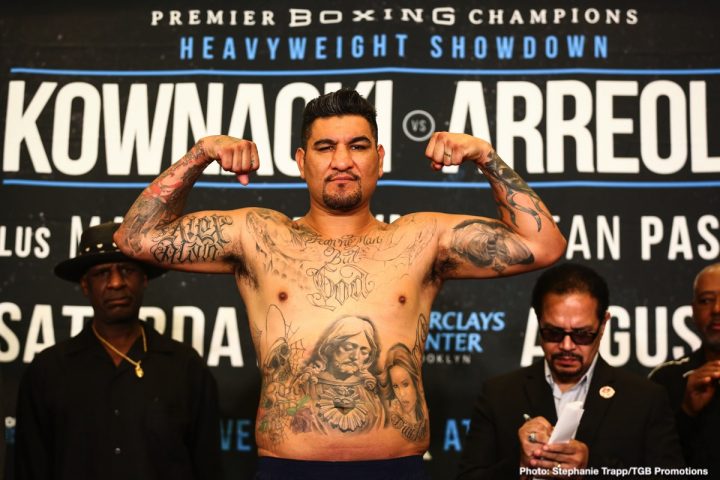 By Charles Brun: Chris Arreola says it’s a mistake for Andy Ruiz Jr. to try and tone up his body for his rematch against former IBF/WBA/WBO heavyweight champion Anthony Joshua later this year. Arreola says Ruiz Jr. (33-1, 22 KOs) should just focus on coming into the fight in shape for boxing, and not worried about trying to change the way his physique looks for he fight.

Tonight, Arreola (38-5-1, 33 KOs) is fighting unbeaten contender Adam Kownacki (19-0, 15 KOs) in a 12 round fight on PBC on Fox and Fox Deportes at the Barclays Center in Brooklyn New York. Both heavyweights look fat compared to Joshua, but they can still punch, and are dangerous fighters.

A win for the 38-year-old Arreola could put him in the world title picture against potentially the winner of the Ruiz Jr. vs. Joshua rematch or WBC champion Deontay Wilder. Arreola says he won’t turn down a fight against Ruiz Jr. if he beats Joshua, and he looks his way to give him a shot.

“I sparred with him when he was 17-years-old,” said Arreola to Fighthype about Andy Ruiz Jr. “I seen him, and I was like, ‘Henry, am I really going to spar with this fat kid?’ He got in the ring. Holy s–t did he change my world, and my perspective of him. He has the fastest hands. He has good power in both hands, and he works hard. Who gives a f–k if he looks fat. Who cares?

The kid [Ruiz Jr.] has got skills, and I heard somewhere he’s going to try and buff up for the fight [rematch with Joshua]. I think it’s a mistake. The main thing for him is to be in boxing shape. The main thing for him is to throw combinations, and do what he does best. Body, who cares? Who cares if you look like Tarzan and fight like Jane? I’d rather be kicking people’s ass rather than being buff, and getting my butt kicked,” said Arreola about the Joshua vs. Ruiz Jr. rematch. 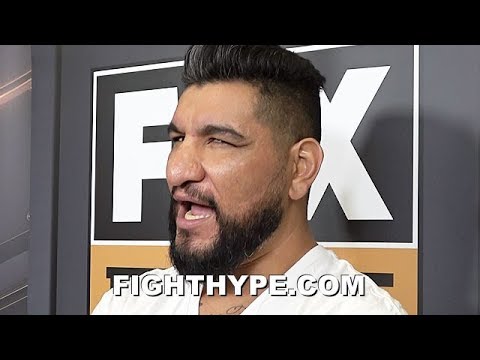 As long as Ruiz Jr. doesn’t lose too much weight, he should be fine for the rematch with Joshua. Ruiz Jr. fought close to 270 pounds in stopping Joshua in the seventh round on June 1 at Madison Square Garden in New York. Joshua was originally supposed to fight Jarrell ‘Big Baby’ Miller, but he tested positive for a banned substance and wasn’t allowed to take the fight.

“I know, I think, where the fight is going, but I just have to wait for some paperwork to be tied up and then we’ll make an announcement,” Joshua’s promoter Eddie Hearn said to skysport.com. “Cardiff is still a major option. We have two or three other options around the world for neutral venues. Neutral venues would give us a lot less headache with Andy Ruiz, but if it’s Wales, it’s Wales, and that’s where the fight will be. But we’re just waiting for some paperwork to be tied up and then [Ruiz Jr] will be alerted as to where that venue is,” said Hearn.

Hearn is really playing it out in the media in giving constant teasers for the location of the Joshua vs. Ruiz Jr. rematch. He knows that Ruiz Jr. and his team are dead set about fighting Joshua in the UK, especially given Matchroom heavyweight Dillian Whyte’s recent adverse drug test findings for his recent fight against Oscar Rivas on July 20 in London, England. Hearn wants the Joshua-Ruiz Jr. rematch to take place in the UK though, because he can’t afford to have him lose a second time to Ruiz.

That’s going to potentially setup a situation where Ruiz Jr. may find himself in a situation where something bizarre could happen. Hearn keeps mentioning Cardiff, Wales as the front-runner for the Joshua vs. Ruiz Jr. rematch, and that’s a location where AJ was involved in fights against Joseph Parker and Carlos Takam that had referees that made controversial calls. As long as Ruiz knocks Joshua out, he shouldn’t have any problems. The question is whether Ruiz Jr. will be able to get to Joshua to land his shots. If the referee is pulling Ruiz Jr. away from Joshua each time he gets near him, then he be effective.

“The difference is whoever makes the first mistake, to be honest,” said Arreola about his fight tonight against Kownacki. “I’m not going to be a deer caught in the headlights. I live for this being in the main event. It’s not like I’m calling out Andy Ruiz Jr.” said Arreola when asked if he’d like to fight Ruiz Jr. if he wins tonight against Kownacki. “Whatever happens, happens. Of course I would [fight Ruiz Jr.]. Any champion. I’ll fight Deontay Wilder again if I have to, and I’ll fight Joshua if he beats him. I’ll fight anyone in order to be a world champion.

Once Andy Ruiz Jr. beats Joshua, I thought, I have a feeling the titles are going to be split. So maybe it can still happen. I don’t know, but I’m hoping for him. He deserves it. The difference between him [Ruiz] and me is he made the most of his opportunity [against Joshua]. I didn’t, and I had three opportunities. I fell flat on my face.”

My second opportunity, I was winning. I got caught, and was knocked out. It happens. “You have to give him all the heads up,” said Arreola about Kownacki. “He’s an undefeated fighter, and we’re fighting in his backyard [Brooklyn, New York]. So he has a slight edge, but I don’t give a crap about any of those guys. I’m going to give it my all for this fight,” said Arreola.

If Arreola beats Kownacki tonight, he’s not going to be given a title shot straightaay He would likely need to keep winning, and wait for an opportunity to present itself to him. Arreola has failed in the past when fighting for world titles against Vitali Klitschko, Bermane Stiverne and Deontay Wilder. Those guys all had too much fire power for Arreola to stay in there with them.

“I hope he didn’t, but if he did, he’s a coward,” said Arreola about Dillian Whyte’s drug testing issues. “Only he knows himself. Personally, I don’t mess with that at all. I don’t need to. I’m okay with getting an ass whooping,” said Arreola.

Whyte, Matchroom and Hearn are all waiting for the B-sample test results to come back from being checked by UKAD. Once those come back, then Whyte he could either be cleared or possibly facing headaches that could impact his career


« Erickson Lubin vs. Dennis Hogan this fall on PBC