Erickson Lubin vs. Dennis Hogan this fall on PBC 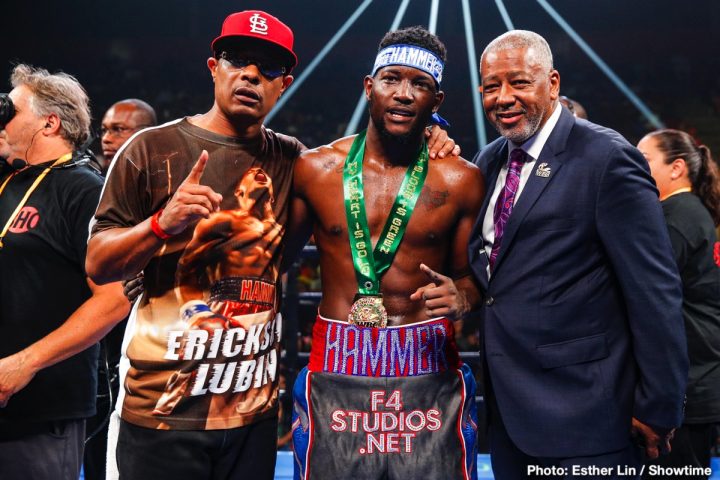 By Kenneth Friedman: Erickson Lubin and Dennis Hogan have agreed to a deal to fight this fall on Premier Boxing Champions in a junior middleweight contest, according to Mike Coppinger. The winner of the Lubin vs. Hogan fight could lead to a world title shot.

Hogan (28-2-1, 7 KOs) recently lost a controversial 12 round majority decision to WBO junior middleweight champion Jaime Munguia on April 13 in Monterrey, Mexico. Many fans felt that Hogan, 34, had done enough to deserve the victory. The judges scored it 116-112, 115-113 and 114-114. Boxing News 24 had Hogan winning eight rounds to four. It looked to some fans like the judges gave the 22-year-old Munguia a hometown. Surprisingly, Munguia’s management didn’t give Hogan a rematch in order to quiet the controversy. Munguia is moving on, and it could be fighting the Matchroom Boxing USA promoted Jessie Vargas next.

Former 154 pound world title challenger Lubin (21-1, 16 KOs) has won his last three fights since suffering a brutal first round knockout loss to former World Boxing Council junior middleweight champion Jermell Charlo in October 2017. Lubin made a mistake of dipping low against Charlo, who unloaded on him with a chopping right hand that knocked him out.

Charlo and his team had studied Lubin well, and noticed his tendency to dip down low in front of his opponents. At the same time, Charlo punches well when he’s throwing chopping power shots. For Lubin, it was the perfect storm. He did the wrong thing against a fighter that like to throw chopping shots. Since that loss, Lubin has won three straight fights in beating Zakaria Attou, Ishe Smith and Silverio Ortiz.

“Sources tell…Erickson Lubin and Dennis Hogan have reached a deal to fight this fall in a junior middleweight bout that will have title implications. The fight will take place on a PBC platform. Hogan coming off controversial decision loss to Jaime Munguia,” said @MikeCoppinger.

Lubin isn’t ranked in the top 15 with the World Boxing Organization, but Hogan is rated #3. Ideally, the WBO should make the Lubin vs. Hogan fight a title eliminator at 154. Without that happening, there’s no certainty that the winner of the Lubin-Hogan fight will get a crack at Munguia. His promoters at Golden Boy Promotions have a lot of options for him against the likes of Saul Canelo Alvarez, Vargas and Gennady Golovkin.

The way that Munguia performed against Hogan, Golden Boy is going to be careful with how they match him. Former two division world champion Vargas is a safe choice for Munguia to fight, because he’ll have a size and power advantage over him. Hogan simply outsmarted Munguia in getting the better of him from the outside. The judges saw the Munguia vs. Hogan fight differently than how the fans viewed it.