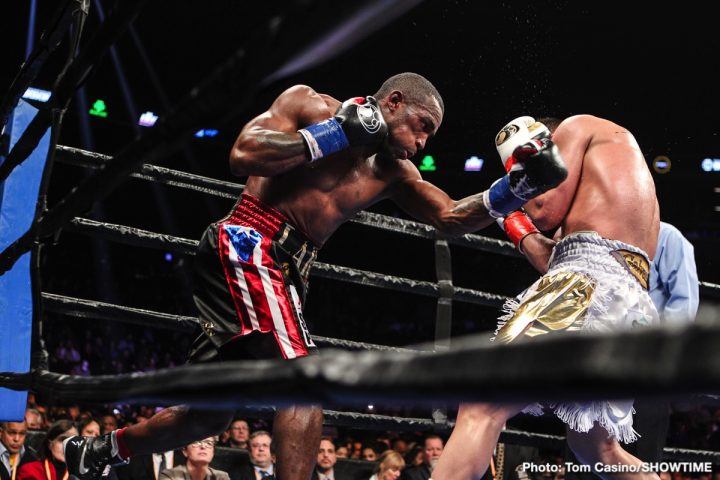 Lara (25-3-3, 14 KOs) says he’s been trying to get a rematch with Canelo since losing to him by a controversial 12 round split decision five years ago in July 2014 in Las Vegas, Nevada.

There’s little interest from fans in a second fight between Canelo and Lara. Right now, there’s talk of Canelo facing WBO middleweight champion Demetrius Andrade next in a unification fight. Whether that match actually happens is unclear. There’s some who believe that the only reason Andrade’s name was recently mentioned as a fight for Canelo was so that he could temporarily put off his IBF mandatory Sergiy Derevyanchenko in order not to have that belt stripped.

Erislandy hoping Canelo will attend his fight with Ramon Alvarez

“Yeah, hopefully he’ll be there, and I’ll probably beat him [Ramon Alvarez]. I’ve been wanting that rematch,” said Lara to Fighthype about wanting a rematch with Canelo Alvarez. “I’ve been asking for that fight for five years.”

The Lara vs. Ramon Alvarez fight is expected to be a mismatch, because the 32-year-old ‘Inocente’ is nowhere near as good as his brother Canelo. Alvarez has been beaten in the past by these fighters:

Rios and Margarito were not in their prime when they beat Alvarez. they beat him simply he’s a limited fighter, and doesn’t posses the hand speed and the boxing IQ that his famous brother Canelo possesses.

Lara, 36, and Ramon Alvarez will be fighting for the interim World Boxing Association World junior middleweight title in their fight this month on August 31, The winner of the fight will be in position to challenger WBA 154 pound champion Julian ‘J-Rock’ Williams in the near future.  Williams (27-1-1, 16 KOs) recently won the WBA title by beating former Lara conqueror Jarrett Hurd (23-1, 16 KOs) by a close 12 round unanimous decision last May in Fairfax, Virginia. The scores were 116-111, 115-112 and 115-112.

Lara lost to Hurd by a 12 round split decision last year in April 2018. The fight was a war from start to finish with both guys taking a lot of punishment. It’s not surprising that Hurd lost his WBA title to J-Rock Williams shortly after that, because he hasn’t looked good since the Lara fight. Hurd struggled in his win over Jason Welborn last December, despite stopping the British fighter in the fourth round.

Lara unlikely to get Canelo rematch

Canelo will likely be in attendance for the Lara vs. Alvarez fight, but he’s not going to likely give the Cuban fighter a rematch. There’s no demand for that fight by U.S boxing fans, and it’s highly unlikely that DAZN would give Canelo the green light to make this fight on their network. Moreover, Lara hasn’t won a contest in two years since his victory over Terrell Gausha in October 2017.

In Lara’s last two fights since then, he’s lost to Hurd, and fought to a 12 round draw against Brian Carlos Castano last March. The 29-year-old Castano (15-0-1, 11 KOs) is a good young fighter, but he wouldn’t have likely been able to draw with Lara if the Cuban fighter were a few years younger. Lara is starting to show his age at 36, and he’s not the same fighter he once was.