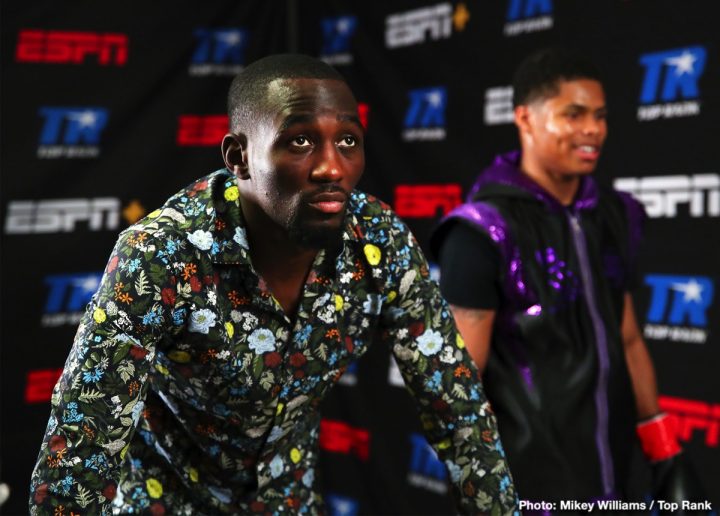 By Raj Parmar: A few days ago when conversing with fans on twitter, undefeated WBO welterweight champion Terence Crawford was asked by a fan about who he favored in the upcoming Errol Spence vs. Shawn Porter championship unification matchup. Crawford replied that he feels the fight is a toss-up and gave each man an equal chance to win the fight and claim the WBC/IBF belts in the welterweight division.

Crawford has a huge stake in the fight as he is also a titleholder in the division and his future may be affected by the result of the fight. Both Spence and Porter are vying to take the next step in their careers and the matchup will represent the biggest fight to date of their careers.

Many boxing fans feel Spence is the favorite to win as he is the bigger, taller fighter and like Crawford is also undefeated. Spence also carries power in both hands and has shown great ability to cut off the ring and do damage against his opponents.

Porter acknowledges that Spence is a complete fighter that is very well rounded, but feels Spence has never fought someone like him before. Porter thinks his constant aggression and own heavy power will force Spence into situations he has never been in before.

The winner of the Spence-Porter fight will hold two of the four major belts in the welterweight division. The other title holders would be Crawford and WBA champion Manny Pacquiao. There is no doubt fans will call for further unification fights after Spence vs Porter, however there is one obstacle in the way.

While Spence, Porter and Pacquiao are all under the same promotional umbrella under Al Haymon, Crawford is signed to opposing promotion Top Rank and it will be tricky for him to take on any of the champions signed to Haymon. Despite the different promotions involved, Crawford has stated he does not think it will not be a problem for him to fight any of the Haymon promoted champions should a situation occur where fans are heavily demanding a fight to take place.

With the winner of Spence/Porter, Pacquiao and Crawford being left standing as the three remaining champions after September 28, fans will definitely be clamoring for a fight to take place between any two of the champions.