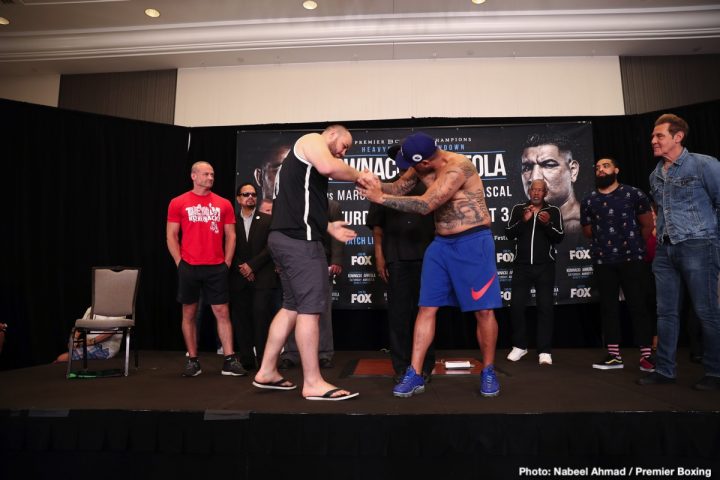 By Matt Lieberman: Undefeated heavyweight contender Adam Kownacki weighed in at a career high 266 pounds on Friday afternoon at his weigh-in for his 12 round fight this Saturday night against former three-time world title challenger Chris Arreola on Premier Boxing Champions Fox and Fox Deportes at the Barclays Center in Brooklyn, New York.

Adam Kownacki weighs in at a career high

Kownacki (19-0, 15 KOs) looks like he wanted to add a little more bulk for this fight so that he can handle the size and strength of Arreola. Up until now, Kownacki has been matched against mostly weak punchers with little talent. The best guy that the 30-year-old Kownacki has faced during his 10-year pro career is former IBF heavyweight champion Charles Martin last September, and he almost lost to him.

The Polish heavyweight Kownacki won a narrow 10 round unanimous decision over the 33-year-old Martin by the scores 96-94, 96-94 and 96-94. The 6’5′ Martin did a good job of exposing Kownacki as a limited fighter.

Arreola: Kownacki’s fans won’t be inside the ring with him

“My goal is to be a world champion. That’s why I said if I lose on Saturday night, I’ll retire,” said Arreola to GarnekSports. “I’m not in boxing to make money. Money is beautiful. I’m in boxing to make history. Even though I’ve had some great fights and a great career, I didn’t have a title. So I didn’t do much for my career. I’ve been in hostile territory. I fought [Deontay] Wilder in his house [Birmingham, Alabama]. Everybody was cheering against me. I know what it’s like to be in hostile territory. They’re [Kownacki’s fans] not going to come in there for him [inside ring].” said Arreola. “When I hear fans cheering, it give me more motivation to put more of myself out there. He [Kownacki] has a lot of amateur experience, but in all honesty, it’s who makes the first mistake. That’s exactly what’s going to happen that night,” said Arreola. 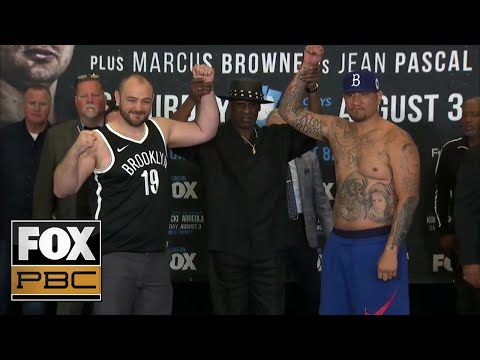 Chris Arreola is right about Kownacki’s fans not being able to help him on Saturday night. It doesn’t matter how many of Kownacki’s fans show up to give him support, if he’s not able to handle the power and talent of the 38-year-old Arreola, he’s going to lose. Arreola has a huge advantage in experience over Kownacki. It’s not even close. Arreola has been in with the best during his long 16-year pro career. The only experience Kownacki has is against Charles Martin and Gerald Washington. Those are two limited heavyweights. It’s surprising that this is the best that Kownacki has to show after being a pro for 10 years.

In weights for the co-feature, interim World Boxing Association light heavyweight champion Marcus Browne (23-0, 16 KOs) weighed in at 173 3/4 pounds for his 12 round defense against former WBC champion Jean Pascal (33-6-1, 20 KOs). For his part, the 36-year-old Pascal weighed in at 174.6 pounds. Pascal is coming off of a 12 round unanimous decision defeat at the hands of WBA light heavyweight champion Dmitry Bivol last November. Pascal gave Bivol a tough fight, but ended up losing by the scores 119-109, 117-111 and 119-109. Browne is a good fighter, but he’s not on the same level as Bivol.