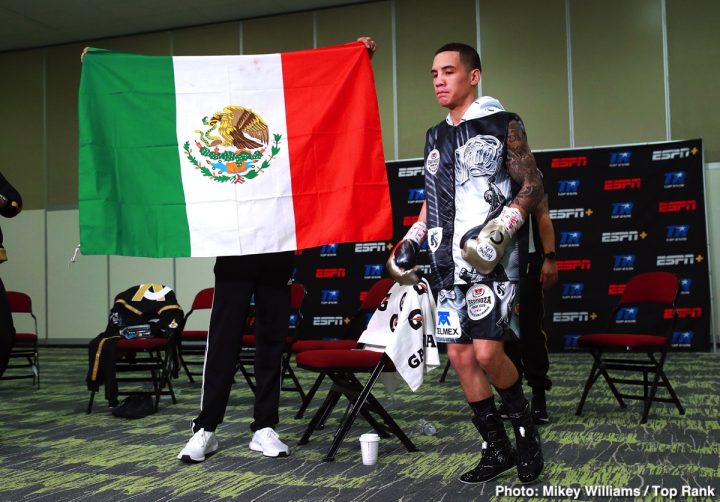 By Dean Flessel: Oscar Valdez has chosen to vacate his WBO featherweight title rather than defend it against his unbeaten mandatory Shakur Stevenson. Many boxing fans had previously predicted Valdez vacating his WBO title once Stevenson (12-0, 7 KOs) became his mandatory, and sure enough that’s what’s happened.

The fact that Valdez vacated his WBO 126 pound title on Friday with a purse bid scheduled for the Stevenson fight, it’s too hard for fans to ignore the possibility that Oscar didn’t want the fight.

Valdez (26-0, 20 KOs) will now move up to 130, and fight for the world titles in that weight class. Valdez’s goal is to become a two division world champion. He’s got an excellent chance of accomplishing that dream if his promoters at Top Rank match him against WBO super featherweight champion Jamel Herring (20-2, 10 KOs).

That’s a guy that Valdez would have an advantage over. It’s unlikely Top Rank will attempt to match Valdez against WBA 130 pound champion Gervonta ‘Tank’ Davis or WBC champion Miguel Berchelt, because are legitimate talents, and likely too big, too strong and too skilled for Valdez

“It’s time. I’ve always wanted to become a multi-division champion. I think I would feel more comfortable at [super featherweight],” said Valdez to ESPN.com. “126 pounds is getting harder to make after seven years as a featherweight so I think moving to 130 pounds would make more sense. Most of the fighters I admire have won several titles and I want that too.”

At super featherweight,  the two-time Mexican Olympian Valdez can fight WBC champ Miguel Berchelt (36-1, 32 KOs) and WBO belt holder Jamel herring for their belts. Those two fighters are signed with the same promoters at Valdez is at Top Rank Boxing, so it’ll be easy to make those matches happen Whether Valdez can beat the likes of Herring and Berchelt is another question.

Berchelt would likely be considered the favorite against Valdez. Herring is more beatable, but he brings little to the table in terms of popularity. In moving up to super featherweight, Valdez would have the same problems he had at 126, and that’s a lack of compelling fights. In moving away from the Stevenson fight, Valdez is giving boxing fan the impression that he’s ducking the 2016 Olympic silver medalist. If Valdez does the same thing at 130, his career will never take off.

Valdez is a good fighter, but he got the stuffing beat out of him last year in his 12 round unanimous decision win over over Scott Quigg. Although Valdez beat Quigg by a wide decision by the scores 117-111, 118-110 and 117-111, he suffered a broken jaw in the fight. It was a really difficult fight for both fighters. Valdez had also been hurt in his wins over Miguel Marriaga and Genesis Servania.

Since returning from a long 11 month layoff after the Quigg fight, Valdez has two soft title defenses against the light hitting Carmine Tommasone and Jason Sanchez. With Top Rank no longer matching Valdez tough, it’s given the impression to some boxing fans that they need to protect him, because he’s taking too much punishment in his fights. In vacating his WBO featherweight title after six defenses, Valdez is expected to use his championship status at 126 to be made the mandatory to fight for the WBO 130 lb. title against the 33-year-old Herring.

With Valdez giving up his WBO featherweight title, Stevenson will now fight the unbeaten #2 WBO Joet Gonzalez (23-0, 14 KOs) for the vacated WBO 126 pound title.  This could be a tough fight for Stevenson, because Gonzalez has talent, and he punch. Gonzalez has recent wins over these fighters: