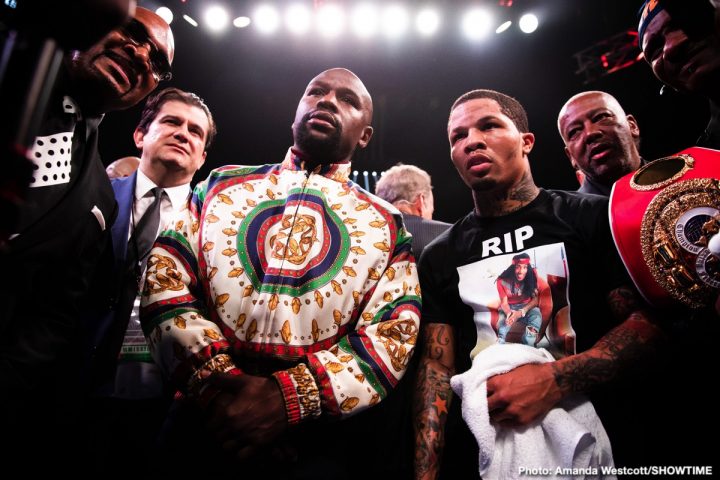 Farmer, 28, says he would be “shocked” if Gervonta was able to fight him, because he sees his promoters not making that fight. For that reason, Farmer is already planning on defending his IBF title next against Joseph ‘Jo Jo’ Diaz Jr. (29-1, 15 KOs) next.

“He doesn’t call the shots. He’s not the boss,” said Farmer to IFL TV about Gervonta Davis. “When I say I want to fight somebody, we make it happen. That’s the difference between me and him. When he says he wants to fight somebody, his team steps in and say, ‘We want to move Gervonta the way we want to move him. We’re building a superstar.’ He don’t call no shots. I said I wanted Jono Carroll, and we got him. When I say I want Joseph Diaz, we’re going to get him, if he doesn’t take another fight. It’s a difference. We’re not the same,” said Farmer.

If Davis, 24, does have any say so in his match-making, then this would be a good time for him to speak up, and insist that Mayweather Promotions makes the fight with Farmer.  Gervonta’s promoter Floyd Mayweather Jr. dropped a huge hint in revealing that if he could match him against either Farmer or Yuriorkis Gamboa (30-2, 18 KOs) next. Given that Gamboa, 37, fought on the Davis-Nunez undercard, and destroyed Roman “Rocky” Martinez (30-4-3, 18 KOs) in a second round knockout, it’s very likely that Gervonta will be fighting him next.

“Tevin Farmer fought tonight. I want Tevin. That’s a fight that can be made. Let’s get it on later this year,” said Davis moments after stopping Ricardo Nunez in the second round.

Mayweather Promotions will be the ultimate decider in who Tank Davis fights next. If they want him to fight Gamboa, then that’s who it’ll be.

“If we can make it happen, and he don’t take another fight, it’s a fight I’m going for,” said Farmer about a fight with Joseph Diaz.  “I definitely don’t see a unification fight. That’s going to be hard to meet. In today’s boxing, that’s not going to happen. If it does happen, it’s going to be a big shock to me. It could be tons of money, but we’re not going to take about that. I feel like the Joseph Diaz fight can be made very easy.

Diaz Jr., 26, would be an excellent option for Farmer to fight if he can’t get the Davis fight. The Golden Boy Promotions fighter Diaz Jr. has won his last four fights since losing to WBC featherweight champion Gary Russell Jr. by a 12 round unanimous decision last year in May 2018. Diaz couldn’t handle Russell’s hand speed advantage in that fight, and he would up being out-boxed. Since that fight, Diaz Jr. has beaten Jesus M Rojas, Charles Huerta and Freddy Fonseca. Those are all quality fighters, and Diaz Jr. proved to be too talented for all of them. Diaz Jr. has future world champion written. That’s going to be a hard fight for Farmer, but it’s still a winnable one if he can use his speed advantage.

Farmer says getting a unification is almost impossible

“I’m probably going to take a week or two off, and then come back to the gym,” said Farmer. “I want a unification fight. That’s damn near impossible. Hopefully, I can get one on. No one wants to take a chance. Everyone wants things in their favor. So I’ve got to move on to the next top contender. So I feel like the next top contender is Joseph Diaz. I love that fight. He can fight. I’m looking to fight the best, and I can’t get any unification fights. So I feel like he’s the next top dog under me,” said Farmer.

Farmer would likely have luck in setting up a unification with WBC champion Miguel Berchelt, WBA champion Andrew Cancio or WBO champ Jamal Herring. Whether Farmer would be interested in fighting any of those guys is the important question. There likely would be more money for him in facing Tank Davis, and those would be risky fights. Berchelt has a lot of talent, and he’s unbeaten. It might be better for Farmer to face Diaz Jr. than him.

Mayweather talks about his relationship with Gervonta Davis

“No matter what anyone says about our relationship, he’s young’s all about growth,” said Mayweather about Gervonta at the post-fight news conference last Saturday. “He says certain things. I’m older and more mature, and at his age, I used to say things about my promoter and be upset. So it’s all about growth. It’s part of being young. But I’m always going to put him in the best position I can position him in so he can continue to win, and continue to be his best,” said Mayweather.

Mayweather is saying that everything is good with him and Gervonta, but if he doesn’t start matching him against bigger names, he could eventually lose him. Gervonta wants to become a star, and he’s not going to do that by fighting the likes of Nunez, Hugo Ruiz and Jesus Cuellar.