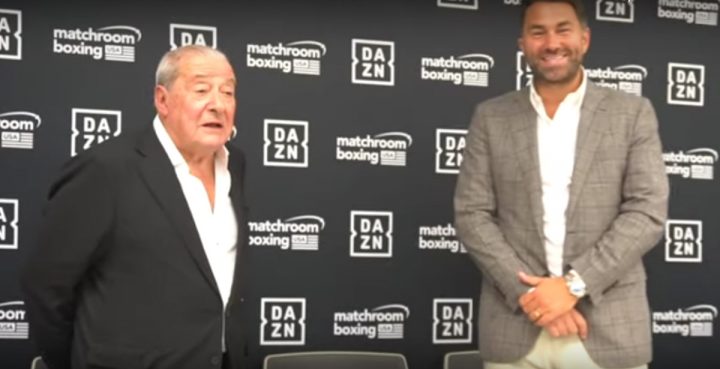 By Aragon Garcia: Promoter Bob Arum agrees with the World Boxing Council’s decision to superstar Saul Canelo Alvarez their WBC Franchise Champion at middleweight, and he feels that he’s earned that right. Canelo is the “face of boxing” and he’s accomplished a great deal during his career for him to be given the right to pick who he wants to fight, as far as his WBC commitments.  The Franchise tag is unquestionably good for the sport of boxing, because it frees up stars like Canelo from having to make pointless title defenses against fighters that don’t bring much to the table.

Arum says Canelo is the only fighter with DAZN that can bring in a lot of subscriptions when he fights. If things go right with Top Rank fighter Vasiliy Lomachenko, Arum is hoping he’d made a Franchise champion too.

Canelo should fight who he wants says Arum

“You don’t get a shot at Canelo,” said Arum in talking about Canelo’s WBC Franchise Championship status. “For example, [Demetrius] Andrade will never get a shot at Canelo; not because of mandatory’s, because he’s a champion of another organization. So this happens in boxing. You don’t automatically get shots. The mandatory system is not designed for that anymore. They will have a regular champion,” said Arum about the WBC middleweight champion.

“Fight for another organization. There are three other organizations. Don’t bother Canelo. He’s the face of boxing; the face in particular of Mexican Americans. And, Canelo is the only guy DAZN has that can move the needle mark a few marks, as far as subscriptions. Let him fight who he chooses to fight,” said Arum about Canelo.

What Arum isn’s saying is the Franchise Champion tag only holds water with the WBC. It only frees up Canelo from having to defend against the top contenders in the WBC’s rankings, not with the IBF, WBA and WBO; hence, the IBF has ordered Canelo to defend against their mandatory Sergiy Derevyanchenko. Canelo can’t ignore that order without losing his title.

“All of you who don’t want to watch him, don’t cover his fights, and don’t go to his fights,” said Arum in talking about superstar Canelo Alvarez. “That’s my position. I don’t think they should make a Franchise [champion] willy-nilly, but Canelo deserves the Franchise tag. [Vasiliy] Lomachenko hasn’t done done enough to deserve that yet. He has two belts. Hopefully if the BBC doesn’t interfere, he’ll have three belts, and then he’ll fight [Richard] Commey and Teofimo Lopez, and have four belts. And hopefully, Maurcio [Sulaiman] will make him Franchise Champion,” said Arum of Lomachenko.

Many people don’t realize that Canelo is good for boxing in North America, and worldwide. There’s no one else that attracts the same amount in the U.S in the sport as Canelo. England has heavyweight Anthony Joshua, but he’s not popular in the U.S. Joshua’s promoter Eddie Hearn attempted to make him into a star in the United States, but his plans went up in smoke when Mexican American Andy Ruiz Jr. knocked him out in seven rounds last June.

“Also because of his body of work, and because he’s the only friggin fighter in that division [middleweight] that can move the needle,” said Arum in explaining the reasons why Canelo deserves to be the WBC Franchise Champion at 160. “I think that counts for something. I’m not Canelo’s promoter. I wish I was, but I’m not. I’m just saying where I’m coming from,” said Arum.

Canelo has captured world titles at 154, 160 and 168 during his 14-year pro career. He’s now poised to win his fourth division world title later this year if/when he challenges WBO light heavyweight champion Sergey Kovalev. Many boxing fans expect Canelo to beat Kovalev, and add his belt to his collection of straps. That would be a fine trophy for Canelo to add to his mantel at home. Kovalev (33-3-1, 28 KOs) has a good name as well, and is easily the most popular fighter in the 175 pound weight class.

These are the big names that Canelo has beaten during his historic career:

“If he beats Tyson Fury twice, yeah,” said Arum when asked if WBC heavyweight champion Deontay Wilder deserves to be given the Franchise Champion tag by the World Boxing Council. “Better than the guy that tested positive for steroids, and becoming the mandatory. I mean, give me a break. He thinks I’m denigrating him,” said Arum about Matchroom Boxing promoter Eddie Hearn.

“I’m helping him, because any person that follows boxing in the United Kingdom will either be at the O2 on August 31 [for Lomachenko vs. Luke Campbell fight] to see what shenanigans the British Boxing Board of Control  or will buy it on pay-per-view. You should thank me. Sure, because they’re doing this levels above commissions here, and when a guy tests positive, even preliminary, they don’t tell the opponent. That’s not a medical issue, right? You’re all the same,” said Arum.

WBC champion Deontay Wilder is going to have a tougher time earning the Franchise Champion tag, because he’s going to need to beat Tyson Fury, Luis Ortiz, and likely the winner of the Ruiz Jr. vs. Joshua rematch. There’s also the possibility that Wilder may need to defend his WBC title against Dillian Whyte if he’s cleared of his pending drug test issues with UKAD.