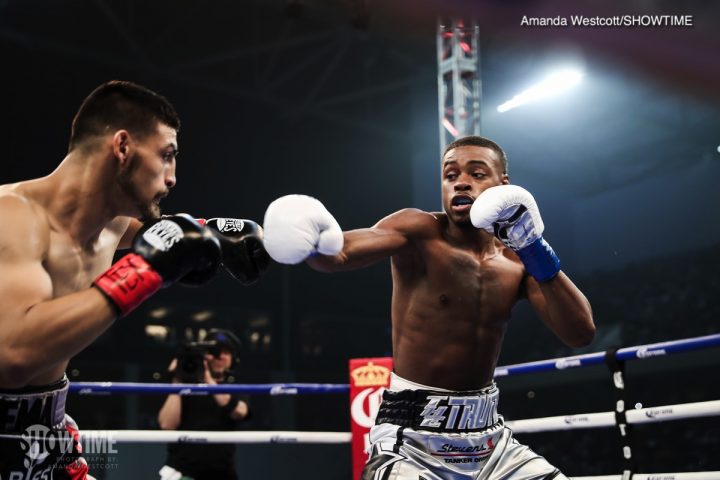 For Canelo and DAZN, a fight against IBF welterweight champion Spence can’t come soon enough, because the Mexican star has a shortage of appealing opponents. Although there’s been talk of a fight between Canelo and WBO light heavyweight champion Sergey Kovalev, that fight reportedly won’t be happening next. Kovalev will be defending against his mandatory Anthony Yarde in his next fight.

Canelo will likely be facing Golovkin in a trilogy fight in September, and then after that the Golden Boy star will be free to face Spence in December or next May.

A lot of boxing fans would be excited at seeing Spence moving up to middleweight to challenge Canelo for his IBF and WBA titles. Spence can’t fight for Canelo’s WBC belt, because he’s been given the Franchise tag by the World Boxing Council. The titles are less important compared to Canelo’s stature in the boxing world. Canelo is easily the most popular fighter in Northern America.

Spence has recent victories over Mikey Garcia, Carlos Ocampo, Lamont Peterson and Kell Brook. Errol didn’t look that great in boxing his way to a dull 12 round unanimous decision win over lightweight Mikey last March on Fox Sports pay-per-view in Arlington, Texas. Boxing fans expected a lot more from the much bigger and stronger Spence than what they saw from him against Garcia. Spence fought a safety first style of fight in beating the short 5’6″ Mikey.

Canelo too big for Spence?

Spence, 5’9 1/2″, will have the height and reach advantage over the 5’8″ Canelo, but he’ll be giving away a lot of weight, speed and punching power. The weight might might not be that much different between the two. Spence blows up to the 180s in between fights, and he looks huge. He might even be bigger than Canelo. Spence is arguably more courageous than the guys that Canelo has been fighting lately, and he could wear him down with pressure. Canelo’s stamina is his weakness, but his opponents haven’t pressed him hard enough to take advantage of it. Golovkin and Daniel Jacobs both allowed Canelo to outwork them in the first half of their recent fights against him. Spence isn’t going to make the same mistake by giving away the first six rounds like GGG and Jacobs did.