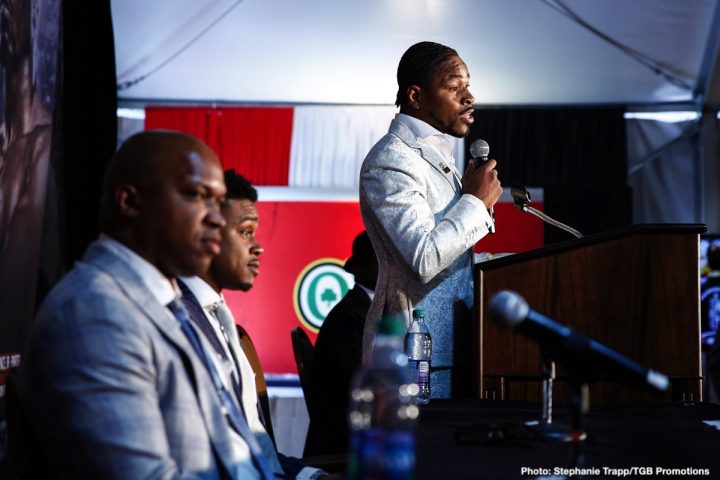 The Spence vs. Porter fight will be shown on Premier Boxing Champions on FOX Sports Pay-Per-View. There’s already a massive amount of criticism from fans, who feel this is a mistake on promoter’s part, because they expect it to bomb badly and generate few buys.

Porter (30-2-1, 17 KOs) is predicting a one-sided victory over Spence. In the last three years, Porter has been involved in close contests against Keith Thurman, Yordenis Ugas and Danny Garcia. Porter says he knows what he did wrong in those fights, and he’s learned from them. He won’t make the same mistakes when he fights Spence. However, without proof that Porter has learned from those fights, the boxing public is forced to take his word for it.

Ugas fought well enough to beat Porter last March in losing a controversial 12 round split decision. When Spence told Porter he made a mistake in choosing to box Ugas instead of slugging, he got upset. Porter wasn’t willing to hear Spence give him some useful criticism. The Ugas fight showed that Porter is limited when he tries to box from the outside. He’s not good enough at range to beat skilled fighters.

Porter says he’s going to get inside on Spence

“We’ve been training since April knowing he was going to be my opponent,” said Porter to Fighthub about Spence. “The other guys are’t willing to do what needs to be done to beat this man. If they were willing, they weren’t able. I think he’s going to try and create that range and keep his distance. It’s definitely going to be important for me to close the gap, and get to his body early. I can see him trying to bang with me. He’s that kind of fighter where he’s not going to allow you to have your way,” said Porter.

We may see a lot of head-butts and elbows thrown by Porter in this fight, and it could get ugly fast on September 28. If Porter decides he’s going to try and mug Spence like he did Paulie Malignaggi, Danny Garcia and Andre Berto, we could see a blood bath. If Spence gets cut badly in the early rounds, he’s likely going to go all out looking for the knockout. Depending on how badly Spence is cut, it’ll be a race against time, with him needing to score a stoppage of Porter before the ringside doctor stops the fight.

One can’t rule out Porter making the fight an ugly roughhouse affair in close like he did recently against Garcia. Spence obviously is going to be prepared for Porter to fight him like that, so he’s ahead of the game. Garcia, Berto and Malignaggi all looked surprised when Porter started roughing them up.

Spence is going to have to make adjustments said Porter

“I think he’s either going to try and keep me at a distance or step in there and try and bring it right back to me,” said Porter. “For me, it’s about putting it all together to put in a great fight, and a very dominant performance on my side. I’m going to try and out-punch, and out-hustle him. It’s going to be up to him to make adjustments,” said Porter.

You can’t help thinking that Porter sounds deluded in talking about the Spence fight, and he also sounds worried.  Porter should be worried. This is a fight that he can not only lose, but lose badly in getting knocked out by Spence. Getting stopped by Spence could close the poor permanently on Porter’s vision of him getting a rematches with Keith ‘One Time’ Thurman and Danny Garcia. Porter wants to fight those guys again, and he can forget about that if he gets knocked out by Spence on September 28. Those guys aren’t going to want to waste time fighting a down in his luck Porter, who would be coming off consecutive poor performances. Like this writer said, Porter arguably should have lost to Yordenis Ugas in his last fight.

Porter looked shot in that fight. Porter’s fight against against Danny Garcia last September might have taken the best out of. Porter beat Garcia by a 12 round unanimous decision by the scores 116-112, 115-113 and 115-113. However, Porter took a lot of heavy shots on the button by the hard hitting Garcia, and he looked pretty beaten up at the end. Porter just barely won the fight. The two 115-113 scores were by far the more accurate scores for the fight.

Porter says he’s going to be “dominant” against Spence

“No,” said Porter when asked if the Spence fight is going to be close. “You have to see. All those fights have prepared me to get ready for this moment,” said Porter. He’s talking about his past fights against Yordenis Ugas, Danny Garcia and Keith Thurman.

“I’m ready to be dominant, and put in a dominant performance,” said Porter. “That’s a win-win for me.”

Porter has two options to try and win the fight with Spence, and they are as follows:

Porter will be at a disadvantage on the outside

Staying on the outside would be a huge mistake on Porter’s part, because Spence has got the height, reach and the jab to win a one-sided decision if the fight takes place range. 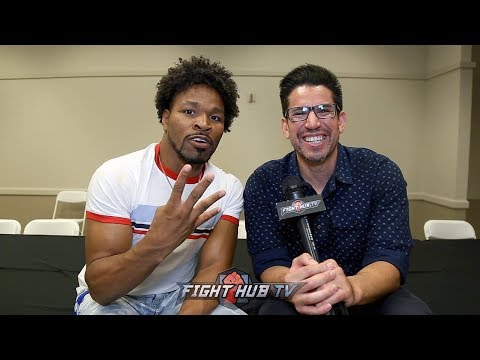 A final gamble on Yuriorkis Gamboa »