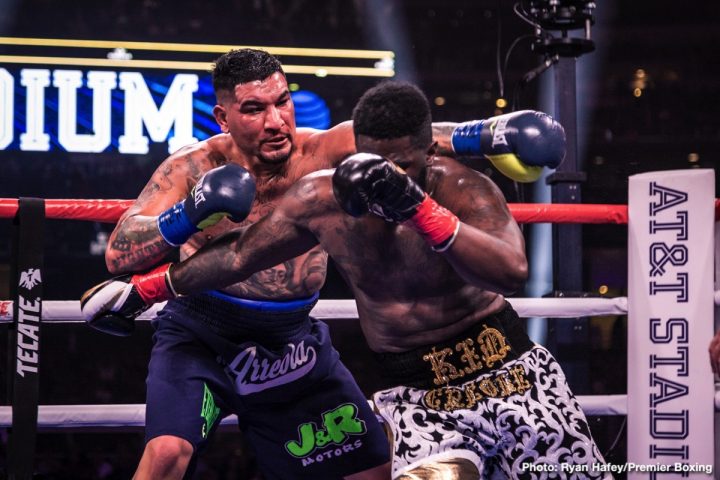 By Matt Lieberman: Former two time heavyweight world title Challenger Chris Arreola says he’ll be retiring if he loses to Adam Kownacki this Saturday night in their 12 round fight on FOX PBC Fight Night and on FOX Deportes. Arreola, 38, doesn’t want to stay around the sport if he can’t fight a high level. The televised portion of the fight card kicks off at 8:00 p.m. ET/5:00 p.m. PT.

‘The Nightmare’ Arreola is taking the match against the unbeaten #4 IBF, #6 WBC & #12 WBA Kownacki (19-0, 15 KOs), because he believes he can still fight at a high level. A loss for Arreola against the 30-year-old Kownacki would show that he’s not able to beat the best. Kownacki is the younger A-side fighter in this fight, and Arreola is going to have to show him and his management that they made the mistake in selecting him to get a win.

Chris Arreola and Kownacki will be fighting at the Barclays Center in Brooklyn, New York.

Arreola: I’m not going to let Kownacki use my name as a stepping stone

“If I lose this fight, I will retire, plain and simple,” said Arreola. “I love the sport of boxing and I want people to still remember me as a world heavyweight champion. I believe I still have the skills to do so. When I fought Jameel McCline, he was one of those big heavyweights that everybody was talking about, but never made it,” said Arreola. “I don’t want to be that guy. I don’t want to be his Jameel. So that’s why I’m working hard out here with Joe Goossen. To make sure to put a little setback to his plans for the world title. He will get there, but my plan is to not let him use my name as a stepping stone.”

If Arreola is going to prevent Kownacki from using him as a stepping stone, he must be at his best on Saturday night. Although Kownacki has a lot of knockouts on his resume, he’s done it against lesser opposition.

These are Kownacki’s best wins:

Undefeated interim WBA light heavyweight champion Marcus Brown (23-0, 16 KOs) will be fighting former WBC 175 pound champion Jean Pascal (33-6-1, 20 KOs) in the co-feature bout. Browne, 28, is coming off of an impressive 12 round unanimous decision win over former two division world champion Badou Jack last January. Jack was cut badly from a clash of heads halfway through the contest, and he wasn’t able to fight at a high level. The timing of the fight was a bad one for Jack. He had just fought a grueling 12 round draw against Adonis Stevenson in May of 2018, and he didn’t look like he was fully back from that fight.