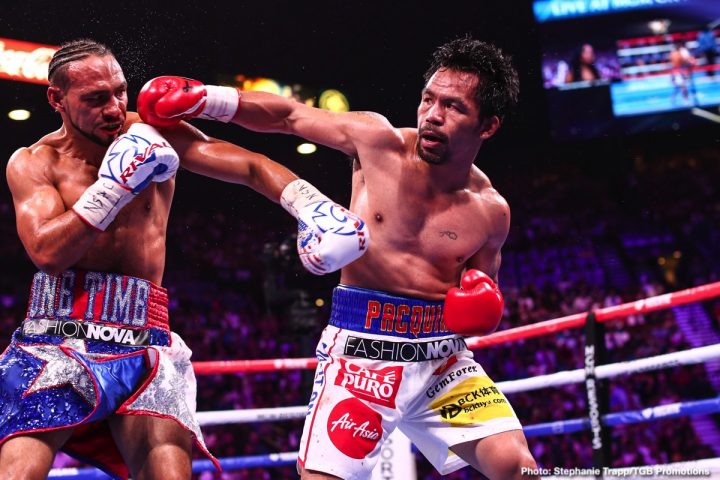 By Raj Parmar: Fresh off leading his ward Manny Pacquiao to a very impressive win over the undefeated Keith Thurman, trainer Freddie Roach made an appearance on sports show Undisputed earlier today. Among discussing the big win over Thurman, Roach spent some time talking about Manny’s newfound state of mind regarding boxing.

Freddie has made it known that once Manny became a devoted Christian a few years ago, he lost some of his signature aggressiveness and shied away from hurting his opponents. Roach confirmed that Manny had indeed told him after becoming religious that he felt he just needed to outpoint the boxers he was up against without trying to knock them out or putting them on the canvas.

Freddie did not agree with Manny’s approach however he was helpless in changing Pacquiao’s mind. This led to Manny winning his fights by decision instead of the devastating knockouts he was accumulating earlier in his career. Roach was frustrated by this new phase and felt Pacquiao’s boxing career was suffering badly as a result.

Manny’s career indeed started going downhill when his aggressiveness in the ring slowed down. He took back to back losses against Tim Bradley and Juan Manuel Marquez before falling to rival Floyd Mayweather. As Pacquiao attempted to rebound from the Mayweather fight, he took a very surprising decision loss against the unheralded Jeff Horn. A lot of fans feel that Pacquiao clearly won this fight and was given an unjust decision against Horn.

It was this loss that recently changed Manny’s stance toward boxing again. Roach and Manny both felt that Pacquiao was robbed against Horn and Manny finally ceded that trying win decisions without hurting his opponents was not a good strategy. He once again started feeling that the best way to ensure he was never robbed again was to damage his opponents and try to win his fights by KO.

In his first fight after the Horn loss, Manny scored his first KO in nine years when he put away Lucas Matthysse after knocking him down three times. He continued this aggressiveness in a dominating win over Adrien Broner and then shocked almost everyone by knocking down Thurman in the first round of their fight.

Although Manny will be 41 years old this year, it is clear that he is at his best when viciously attacking his opponents instead of trying to coast to easy decision wins. With Roach claiming that Manny’s killer instinct is back, the boxing world may still get treated to another vintage Pacquiao performance in the near future.