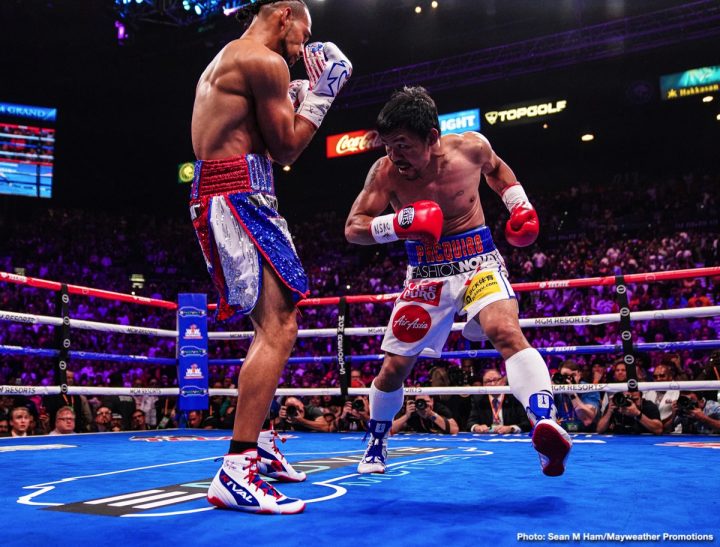 By Dan Ambrose: Manny Pacquiao emerged on Tuesday to speak for the first time since after his huge wins over Keith ‘One Time’ Thurman last Saturday night in Las Vegas, Nevada. Pacquiao (62-7-2, 39 KOs) thanked the media that had covered his important fight against ‘One Time’ for the last two months, and he also gave Keith thanks as well.

Thurman did the hard work of promoting the fight

It’s understandable why Pacquiao, 40, gave Thurman some kudos, because he had worked tirelessly in the last 10 weeks in creating interest in their July 20th fight with his interviews with the boxing media. It was an incredible performance by Pacquiao in out-punching Thurman in the first half of the fight, and then holding on to preserve the victory in the second part of the fight.

Pacquiao’s stamina gave out in the middle of the contest, but he got his second wind and came back in the 11th and 12th round to win the fight by a 12 round split decision.

To the fans I fight for, the media who cover me, the friends and family who support me, and to @KeithFThurmanJr, who accepted my challenge, Saturday night was an honor and privilege. I would also like to thank @premierboxing, @FOXSports, & @MGMGrand for a great event. God Bless. pic.twitter.com/yM91F5mnE4

Some boxing fans wonder how 40-year-old fighter like Pacquiao was able to fight at such a high level last Saturday. As one would expect, there was finger pointing by a few fans, who felt that Pacquiao had help in the form of performance enhancing drugs. However, he was tested for the fight by VADA, so that closes out that wild theory. The reality is, Pacquiao won the fight on just old fashioned hard work to go along with his natural speed that he’s always had going for him.

“It was a unanimous decision,” said Shawn Porter to Fighthub in pointing out that he viewed the Pacquiao-Thurman results as being incorrect. “Someone asked, ‘were you surprised at how humble Keith Thurman was?” I said, ‘No, it wasn’t a split decision.’ I said, ‘even when it’s a split decision, we fighters always know what the truth it.’ I think Keith Thurman was out-hustled. He was just a step behind Manny throughout the fight. It was a great fight though,” said Porter.

Pacquiao outworked Thurman during the major portion of the fight, and that’s the main reason why the 30-year-old Thurman came up short in the fight. It was a winnable bout for the Florida native Thurman, but he didn’t have the gas tank in the rounds that he needed for him to get the victory. If you look at how Thurman used to fight in his best years when he was beating the likes of Julio Diaz, Jesus Soto Karass and Leonard Bundu, and compare it to now, it’s a different fighter. Age and inactivity has seeped away a lot of the physical attributes Thurman once had. Pacquiao has stayed active with his career, and that benefited him last Saturday night.

Roach says the body shots were key to Pacqiao’s win

“40-years-old,” said trainer Freddie Roach about Pacquiao. He did really well, and he can do even better. We can show you. Where is Floyd? I think there was a little bit of fatigue [with Pacquiao]. Thurman won the middle rounds, and Manny came back at the end. This was the fight of the year. We always want Mayweather one more time, but I don’t think that’s going to happen, because I know we can do better than in the first fight. There’s some good fighters out there. I was shocked. It was a beautiful shot,” said Roach about Manny’s first round knockdown of Thurman. “The body shots were the ones that killed him. The body shots are the ones that made him run for the whole round,” said Roach.

To be more precise, the body shots that Pacquiao landed in the 10th round is what did the job on Thurman. That was a key round that Thurman needed to win in order to keep the momentum going to get him back into the fight, but he was hurt by the hard body shot from Pacquiao. After getting hurt by Pacquiao, Thurman spent the remainder of the 10th on his bike trying to avoid Manny.

“So that was definitely a two pound round in my book. That was a two-point round for us for sure,” said Roach. “He [Pacquiao] taught him a lesson. He was very gracious,” said Roach about Thurman after the fight. “He’s a pretty nice kid. Going into this fight at 40, very good, but I know he can do better. There’s a lot of guys out there. You’ve got Spence. Let’s see who wins those fights. Mikey Garcia, is he out there? I love that fight for Manny. I think Manny destroys him. I’m not a Mikey fan, no. I’m not. They don’t like me, and I don’t like them,” said Roach.

This fight is very doable for Pacquiao if he wants to fight Mikey Garcia (39-1, 30 KOs) badly enough. Mikey doesn’t have an opponent scheduled for his next night, but he would likely be agreeable to facing WBA Super World welterweight champion Pacquiao.

The timing for a fight between Pacquiao and Mikey isn’t the best right now if Manny is thinking of putting the fight on Fox Sports PPV. With Mikey having lost his last fight against Errol Spence Jr. on March 16, the boxing public wouldn’t be all that enthralled at paying to see Pacquiao fight him right now. It would be better for Pacquiao to wait until Mikey picks up a couple of wins before he faces him. Pacquiao would be better off fighting someone like Amir Khan than Mikey right now.

“I think that Manny won decisively, but I gave rounds to Manny that were very, very close. Manny barely won it,” said former two division world champion Jessie Vargas to Fighthub. “It was a close fight. He had the ring generalship, but Keith Thurman did a good job as well. He was in there landing good shots, landing that counter right hand over the top. He’s always been explosive, and the speed had Keith Thurman on the canvas in the first round,” said Vargas.

It was a close fight, but Pacquiao did win. He made it decisive enough to where boxing fans weren’t calling it a robbery, and that’s a good thing. When you look at Saul Canelo Alvarez’s two controversial fights with Gennady Golovkin, it was good to see Manny winning a decisive 12 round decision over Thurman. Yeah, one judge scored it for Thurman 114-113, but the other two judges overruled him in scoring the fight 114-112, 114-112 for Pacquiao. That’s all that matters.

“No, no, no,” said Vargas when asked if Pacquiao is showing age. “He’s 40-years-old. He didn’t look bad. Keith Thurman is one of the top welterweights in the world, and he lost to Manny Pacquiao. Even at 40, he’s fast and explosive. He was moving left and right. He did tire out by the 10th round, 11 and 12, but he still won the fight. He took some rounds off, but ultimately he knew when, where and how to increase the momentum. He might not have won by a knockout, as we would have expected years ago, but he still beat a very good fighter in Keith Thurman,” said Vargas

Pacquiao didn’t look like the same guy that beat Miguel Cotto in 2009, and Oscar De La Hoya in 2008. Manny isn’t able to fight as hard as he did back then without taking four or five rounds off. That’s why Thurman was able to creep back into the fight in the middle rounds. Pacquiao’s loss to Jeff Horn in 2017 was also a product of him not having the gas tank to fight hard enough to turn up the head in the championship rounds. Pacquiao had Horn readied to be knocked out at the end of the ninth round.

All Pacquiao had to do is press hard in rounds 10, 11 or 12, and he would have stopped Horn. Pacquiao couldn’t do it, because his gas tank didn’t allow him. That’s age. Last Saturday, Pacquiao showed the same stamina problems as he did in the Horn fight, but he won because Thurman’s conditioning was even worse.

Pacquiao can beat a lot of the young bucks says Vargas

“Definitely, anything can happen in boxing,” said Vargas when asked if Pacquiao can beat the top welterweights like Errol Spence and Terence Crawford. “Those guys can beat Manny Pacquiao, but Manny Pacquiao can land a punch like he did against Keith Thurman, and take them out. with Manny, you just never know. With his speed and explosiveness, he could take down a lot of these young bucks. You just never know,” said Vargas.

Pacquiao can beat a lot of younger fighters, but probably not Spence or Crawford. Those guys are on a different level as Pacquiao right now. It would be a mistake for Manny to even try to fight either of them. Similarly, Pacquiao would have problems if he fought Porter, Yordenis Ugas, Danny Garcia and Sergey Lipinets. Pacquiao might be able to beat some of those fighters, but probably not all of them. Lipinets and Danny Garcia both hit really hard, and they’re young and they don’t have stamina problems that we saw with Thurman. Ugas would be a winnable fight for Pacquiao, but stll a very tough one.