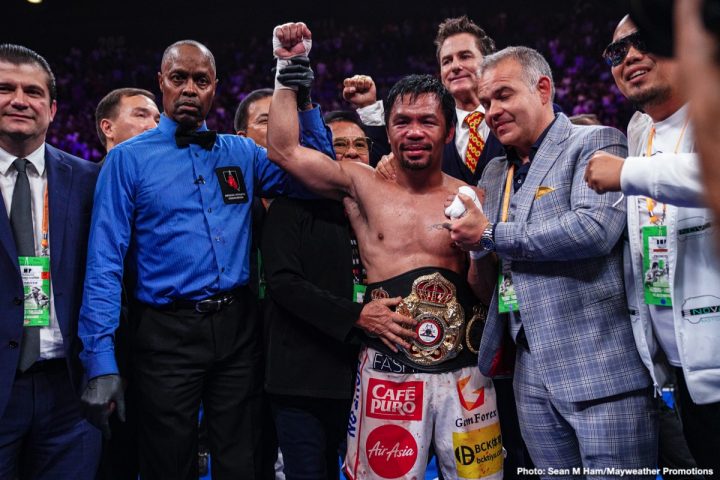 By Kenneth Friedman: Floyd Mayweather Jr. and Manny Pacquiao exchanged words on social media on Tuesday night. Manny, who is coming off of an impressive win over Keith Thurman, started it off by saying that Mayweather came to his fight with ‘One Time,’ and is using his name to stay in the limelight.

Pacquiao (62-7-2, 39 KOs) then pointed out that it’s he who staying relevant by continuing to fight. Mayweather hasn’t fought against a true boxer since his win over Andre Berto in 2015. Since that win, Maweather has fought two MMA fighters – Tenshin Nasukawa and Conor McGregor – in boxing events.

Pacquiao, 40, wants Mayweather to come out of retirement and face him in a rematch. Mayweather, 42, doesn’t appear to be interested in giving Pacquiao the opportunity to face him again, as he’s retired from boxing. Although Mayweather is still fighting against MMA guys from time to time in boxing events, he’s done from fighting against professional boxers. Mayweather is satisfied with the 12 round unanimous decision win he got over Pacquiao in May 2015, and he doesn’t wish to revisit that fight. The fans aren’t satisfied, and neither is Pacquiao. They want to see them face each other in a rematch. Mayweather could probably make over $100 million in a rematch with Pacquiao if he took it right now. That’s an incredible amount of money for Mayweather to walk away from.

.@FloydMayweather You come to my fight and then use my name in a post but I’m the one that is trying to stay relevant? 🤔 if you want to be relevant again… #MayPac2

What a lot of boxing fans are saying after reading this comment from Pacquiao is they believe it wasn’t written by him. They think Pacquiao has a ghost writer that is in control of his Twitter and Instagram accounts on social media, and does all the posting. It’s the same thing with Mayweather’s Twitter and Instagram accounts. Many boxing fans think that Mayweather has a “ghost writer” that is writing all of his posts, because they sound like they’re coming from a different person other than Floyd.

Mayweather – or whoever controls his Instragram site – fires back at Pacquiao

“Let’s stick to the facts! Bob Arum is no longer your promoter, so when it comes to Mayweather Promotions & PBC [Premier Boxing Champions] events I’m the HNIC! Bottom line, I make more money than you; I beat you, then I signed you! I was only at your fight supervising you, my employee, as any real BOSS would do. You made $10 Million for 12 rounds, when I just made $9M in under 3 minutes playing around in an exhibition with a pizza delivery guy [Tenshin Nasukawa]! I beat you mentally, physically and financially! Remember, you fight cause you have to, I fight when I want to!”

Mayweather beat Pacquiao by a 12 round unanimous decision in May 2015 by the scores 116-112, 116-112 and 118-110. It was a fairly close fight. Pacquiao said he had an injured right shoulder that he fought with. Whether the outcome would have been different if Pacquiao was healthy is open for debate.

Mayweather: Pacquiao’s legacy is built off being associated with my name

“I find it real ironic how every time Pacquiao’s name is brought up in the media, my name is always attached to it. This man’s entire legacy and career has been built off its association with my name and it’s about time you all stop using my brand for clout chasing and clickbait and let that man’s name hold weight of its own,” said Mayweather on his Instagram. “For years, all you heard was that ” Floyd is afraid of Manny Pacquiao”. But what’s funny is, when we finally fought, I won so easily that everyone had to eat their words!”

Pacquiao has done more with his career than what Mayweather thinks. The former eight division world champion Pacquiao hasn’t been living off of Mayweather’s name for the last 24 years. Obviously, Pacquiao has accomplished a great deal in boxing, and winning world titles repeatedly against good fighters. Manny obviously would like to fight Mayweather again to try and avenge his loss to him in 2015, and get a big payday in the process. There’s nothing wrong with that.

Excuse me Floyd, your name has not been on any of my PBC contracts. But if you would like to be on the next one, I will have one drawn up and sent to you. #CounterfeitMoney pic.twitter.com/SwFGcpT048

What’s hard to understand is why Mayweather doesn’t want to fight Manny? Is it fear? Is Mayweather afraid of having his perfect 50-0 record spoiled? His record is already tainted in the eyes of many fans due to his controversial wins over Marcos Maidana and Jose Luis Castillo. Many boxing fans think Mayweather was given gifts in his first fights against both of those fighters. Castillo and Maidana outworked Mayweather, and appeared to beat him. Mayweather won both of those fights by highly questionable decisions.

“All of the so called boxing experts, critics and jealous American “fan base” either went mute and ran for cover or made every excuse in the world as to why I should give Manny Pacquiao a rematch,” said Mayweather. “My take on all this bulls–t is that y’all are just upset that I broke Rocky Marciano’s record and hate the fact that a Black, high school dropout outsmarted you all by beating all odds and retiring undefeated while maintaining all my faculties simply by making smart choices and even smarter investments. Ultimately, I will always have the last laugh!” said Mayweather.

Boxing fans aren’t upset with Mayweather because he broke heavyweight Rocky Marciano’s 49-0 record. One could argue most casual fans have never heard of Marciano or his record that stood for 60 years until Mayweather broke it against an MMA fighter, not a boxer, Conor McGregor in 2017. A lot of the boxing fans are unhappy with Mayweather that he’s not interested in fighting Pacquiao again, and they see it as a situation where Floyd is afraid is losing. With the huge amount of money that Mayweather would make fighting Pacquiao, it’s seems obvious to fans that he’s afraid of the Filipino star.

Mayweather looked slow and old in his last 2 fights

Mayweather looked slow and old in his last fight against Japanese kickboxer Tenshin Nasukawa last year. In Mayweather’s prevous fight against UFC star McGregor, he looked slow as well. Being out of the ring for four years hasn’t helped Mayweather’s physical skills. His physical skills have clearly eroded to the point where he would likely lose badly to Pacquiao if he were to fight him now. That’s pretty obvious. The Mayweather that we saw against McGregor and Nasukawa would stand very little chance against Pacquiao or any of the top five in the welterweight division. Unfortunately, Mayweather has lost too much from his game.

Is Mayweather afraid of having his perfect record blemished?

Father time has done a number on Mayweather’s skill set, and he’s now beatable against almost any top 15 welterweight. That’s the reality of it, and he clearly doesn’t want to see his perfect record blemished. For the average boxing fan, it’s hard for them to understand Mayweather not wanting to fight Pacquiao and make over $100 million in the process. Fans can’t relate to someone that isn’t willing to make that kind of money, and they see Mayweather as being so afraid of Manny that he’s willing to walk away from that huge money. It’s hard a lot of boxing fans to respect a fighter that isn’t willing to face someone for that kind of a payday.

The Nevada State Athletic Commission sanctioned Mayweather’s fight against McGregor as a professional boxing match. McGregor, a UFC fighter at the time, had never fought in a boxing match before. Mayweather promptly stopped McGregor in the 10th round to break boxing great Rocky Marciano’s record of 49-0.