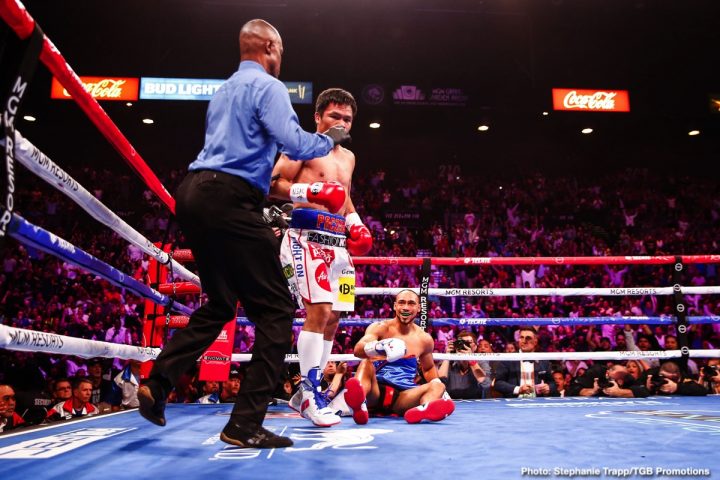 Boxing’s only eight-division world champion, Senator Manny “PacMan” Pacquiao dropped Keith “One Time” Thurman in round one and won a close split decision to earn a welterweight world title in the main event of a Premier Boxing Champions on FOX Sports Pay-Per-View event Saturday night from the MGM Grand Garden Arena in Las Vegas.

“It was fun,” said Pacquiao. “My opponent is a good fighter and boxer. He was strong. I’m not that kind of boxer who talks a lot; we were just promoting the fight. I think he did his best, and I did my best. I think we made the fans happy tonight because it was a good fight.”

The sell-out crowd of 14,356 got treated to great action from the start, as an exciting first round was capped off by Pacquiao dropping Thurman for the first time in his career with a straight right hand late in the round.

“I knew it was too close,” said Thurman. “He got the knockdown so he had momentum in round one.”

Thurman made it into the second round but continued to have trouble with Pacquiao’s right hand, as the future Hall of Famer threw it successfully as a jab and a power punch throughout the fight. Thurman adjusted in the middle rounds and began to try to smother Pacquiao and walk him down, having success when he was able to get his combinations off before his opponent.

Despite blood pouring from his nose from round four on, Thurman was able to land powerful combinations on Pacquiao for much of the second half of the fight, but was never able to hurt Pacquiao or score a knockdown of his own.

“I wish I had a little bit more output to go toe to toe,” said Thurman. “I felt like he was getting a little bit tired, but he did have experience in the ring. My conditioning and my output was just behind Manny Pacquiao’s. I would love the rematch.”

In round 10, Pacquiao’s landed a strong left hook to the body that clearly hurt Thurman and forced him to spend much of the remainder of the round backpedaling. The CompuBox scores were indicative of the close nature of the fight, with Thurman out landing Pacquiao 210 to 195, while Pacquiao was busier throwing 686 punches to 571 from Thurman.

“I really love the fans,” said Pacquiao. “Thank you so much for coming here and witnessing the fight. I’m sure they were happy tonight because they saw a good fight. Even though Thurman lost, he did his best. He’s not an easy opponent. He’s a good boxer and he’s strong. I was just blessed tonight.”

Pacquiao had a large advantage in jabs landed, connecting on 82 to Thurman’s 18. The 192 power punches landed by Thurman was the most in 43 Pacquiao fights that CompuBox has tracked. Round-by-round, the two fighters were only separated by more than five landed punches in rounds two, seven and nine.

After 12 rounds, the judges reached a split decision, with one judge scoring the fight 114-113 for Thurman, overruled by two judges scoring it 115-112 for Pacquiao, who captured the WBA Welterweight World Championship at 40-years-old.

“You get blessings and lessons,” said Thurman. “Tonight was a blessing and a lesson. Thank you everybody, and thank you Manny Pacquiao.”

“I think (I will fight) next year,” said Pacquiao. “I will go back to the Philippines and work and then make a decision. I do hope to be at the (Errol) Spence vs. (Shawn) Porter fight on September 28.”

Ugas got off to a strong start, connecting on a straight right hand that sent Figueroa into the ropes, which he held onto so he didn’t hit the canvas, but enough that referee Russell Mora ruled it a knockdown.

“The fight played out how I thought it would,” said Ugas. “I came out strong and Figueroa was tough as well. This was similar to the fight everyone expected. I came out on top.”

Figueroa recovered and was able to make it to round two, where he continued his strategy of coming forward to try to hurt Ugas on the inside. Ugas was able to control that action on the inside, landing numerous uppercuts to stun Figueroa. However, the inside fighting led to Ugas being deducted a point by the referee in round five for holding.

“Ugas fought a smart fight,” said Figueroa. “He was smothering me on the inside and holding. I thought the scores were too wide. I was following him and working the whole time. I felt like he only worked the last 30 seconds of the round, but I guess that was all it took.

“I didn’t have any problems with his size. I thought I was able to do my thing, but when he was holding me I couldn’t get my offense going.”

Despite that, and being warned later in the fight for delivering low blows, Ugas dominated the fight according to CompuBox, out landing Figueroa 229 to 131 and connecting with 28% of his punches, to Figueroa’s 22%.

“I knew Figueroa was a tough guy, so I didn’t want to waste my energy trying to take him out early,” said Ugas. “I was ready to go 12 rounds.”

After 12 rounds, all three judges scored the fight the same, 119-107 in favor of Ugas, who became the mandatory for the winner of the Errol Spence Jr. vs. Shawn Porter welterweight title unification.

“I’m extremely happy to be in this position to fight for the WBC title again,” said Ugas. “I will be ready for the winner of Errol Spence Jr. vs. Shawn Porter.”

Lipinets was originally scheduled to fight John Molina Jr., before Molina pulled out of the fight Friday morning due to a back injury. Inson, who was scheduled to fight on the non-televised undercard, stepped up to the challenge.

“When I first heard the news about Molina, I knew that I wanted to still fight on a show of this magnitude,” said Lipinets. “As far as fighting a southpaw, I’ve had so many amateur fights in my kickboxing career that I had no problem adjusting. It was just a matter of time. I also have sparred with great southpaws like Victor Ortiz throughout my career, so I was comfortable with the change in fighter.”

In an exchange early in the second round, Lipinets landed a clean left hook to Inson’s head, which sent the Filipino-fighter to the canvas. Although Inson got to his feet, referee Jay Nady waved off the bout 57 seconds into the round.

“I got hit and I slipped, that made it look worse,” said Inson. “When I stood up I thought I was fine and tried to raise my hands and show the referee.”

“Joe Goossen is an exceptional trainer and he just told me to work from a different direction facing a southpaw,” said Lipinets. “I just made sure to block his punches with my elbows. That was the only adjustment I had to make and it ended up working just fine.”

Luis Nery Knocks Out Juan Carlos Payano in Ninth Round

“I wasn’t really paying attention to how long the fight was going, I was just getting into a rhythm as it went on,” said Nery. “I had to work hard to get to him because he’s a good boxer. The longer it went, the better I felt. I put my punches together well once I got going.”

In a fast-paced duel of former champions, Payano had success early boxing the aggressive Nery, moving back to avoid his attack and landing his own offense against the knockout artist. Payano out landed or was even in punches landed for each of the first six rounds of the bout.

“I’m a warrior and I wanted to keep going and fight back every time he came forward,” said Payano. “My coach wanted me to stay behind my jab a little more.”

As the fight grew into the middle rounds, Nery began to increase the offense and was able to land power shots that slowed Payano’s ability to box from the outside. Nery hurt Payano early in round seven, eventually dominating the round, out landing his opponent 22 to 7.

“He was a very complicated fighter at the beginning, he’s a veteran, so I had to try to adapt to his style to see how I could get in,” said Nery. “In the fifth or sixth round I started gaining control of the fight and then that left hook came to the body which was devastating.”

“During the exchanges it was Nery’s second shot that was getting in,” said Payano. “We corrected the issue but then that body shot came in from nowhere and hit me in a rib that I had broken years ago against Raushee Warren.”

Round eight saw Nery continue to break Payano down, most notably landing a big left hand midway through the round that caused blood to pour from Payano’s nose. During an exchange in the ninth-round, Payano landed a devastating left hook to the ribs that put Payano down. He was unable to recover and referee Vic Drakulich halted the bout 1:43 into the round.

“I wanted to get him out early,” said Nery. “But this showed that I do have the experience to go into the later rounds and still take out my opponent. I showed that I have good defense and can make adjustments.”

Thurman comes up short against Pacquiao »