Pacquiao rates win over Thurman among the best of his career 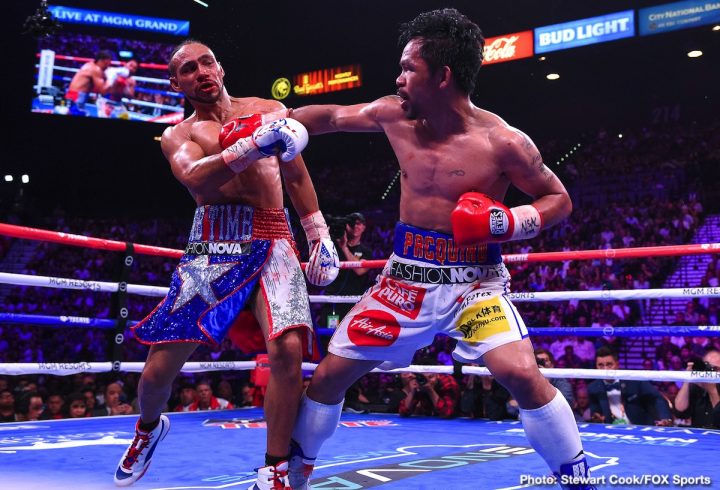 By Kenneth Friedman: Manny Pacquiao is proud of having beaten one of the best fighters in the welterweight division in Keith ‘One Time’ Thurman last Saturday night. Pacquiao surprisingly rates the victory among his core wins during his long 24-year pro career.

Yet, despite the uncertainty of what Thurman has left in the tank after two long years out of the ring, Pacquiao is lumping his victory over the Florida native up there with his past wins over Oscar De La Hoya, Juan Manuel Marquez, Marco Antonio Barrera and Antonio Margarito.

Pacquiao got off to a fast start in knocking Thurman down in round one, and then stayed on top in holding off a late surge to win by a 12 round split decision last Saturday night on Fox Sports Pay-Per-View at the MGM Grand in Las Vegas. Nevada. The judges had it 114-112, 114-112 for Pacquiao, and 114-113 for ‘One Time’ Thurman.

“I think I can rank this with the Margarito fight, the De La Hoya fight, the Morales fights, the Marquez fights, the Barrera fights,” Pacquiao said. “You saw tonight what we did in the ring. My opponent was very tough and strong, also. It’s the first time I’ve encountered someone who was heavy-handed like Keith Thurman.”

On the face of it, Pacquiao’s praise of Thurman makes sense if you compare it to his wins over Margarito and De La Hoya, because neither fighter were in their prime at the time that Manny fought them. De La Hoya was a weight drained, part-time fighter, who was years beyond his prime. For his part, Margarito had left his best behind him in 2008 when he beat Miguel Cotto in a grueling contest. Pacquiao’s wins over Marco Antonio Barrera and Juan Manuel Marquez have to be viewed as far better victories than his win over the 30-year-old Thurman. However, there were more than a few boxing fans that felt that Marquez was robbed in his first three fights with Pacquiao.

For that reason, the victories might not have been as special for Pacquiao, because the boxing world didn’t see any of them as conclusive. Marquez’s sixth round knockout win over Pacquiao was conclusive, and he closed out their rivalry with that victory.

Pacquiao giving too much praise to Thurman?

Manny was being kind to Thurman after the fight at the post-fight news conference in putting him up there with his best victories of his career. Pacquiao was showing class by complimenting his beaten foe. But if one looks at Pacquiao’s resume, he has a number of wins that would rate as better than Thurman. Here’s a short list:

Some boxing fans believe Pacquiao deserved a victory over Floyd Mayweather Jr. as well. If you look at Manny’s fight against Mayweather in slow motion, it does indeed look like he got the better of Floyd. What was so incredible about that performance by Pacquiao is he did it with one bad shoulder. He surgery after the fight to fix a problem that had plagued him for a while. Imagine what a completely healthy Pacquiao would have done against Floyd. Perhaps that’s one reason why Mayweather has shown no interest in giving him a rematch in the last four years.

Thurman got off to a bad start against Pacquiao

In the first round, Thurman was dropped by Manny with a hard shot. From that point on, Thurman was playing catch-up, and fighting in a self-destructive manner by using too much movement, and not enough pressure. Thurman says he realized he needed to adapt in order to impress the judges. In the middle rounds, Thurman took the fight to Pacquiao, and began to tire him out with the pressure. Thurman ran out of time at the end. If this had been an old school 15 round fight, Thurman would have had a chance of pulling out the victory against a tired Manny. Unfortunately for Thurman, he started too late, and couldn’t make up ground in the second half.

“He had a lot of momentum from that point,” Thurman said. “I ended up paying attention to the number of rounds. By the time we got to the seventh I was like ‘Damn, we’re in the seventh already.’ -So many wars.'”

Pacquiao’s superior stamina is what proved to be too much for Thurman to handle. All the hours of playing basketball year round to keep in shape, helped Pacquiao with his stamina during the fight. Thurman looked like he didn’t have the conditioning to take control of the fight in the way that he needed for him to win.

Thurman: I needed a better output

“He just knows what to do at the right time,” said Thurman about Pacquiao. “I had a good training camp but I felt like I needed a better output to go toe to toe with Manny Pacquiao.”

Throwing more punches might have helped Thurman, but it also could have blown up in his face. The unpredictable attacking style of Pacquiao would have given him problems if he’d opened up with more shots. Pacquiao wouldn’t have given up, and let Thurman dominate the action without hitting him back. If Thurman had thrown another 200+ shots in the fight, you can bet that Pacquiao would have nearly matched his efforts.

In looking at Thurman’s face afterwards, it was reddened, his nosing bleeding and his forehead lumped up. That was with Manny landing close to 200 shots. Had Thurman increased his punch output, it would have meant that Pacquiao would have responded with his own shots. We might have seen a knockout either way. It’s difficult to picture Thurman being the one that would have scored the knockout.

Pacquiao’s trainer Freddie Roach admits that he was tired by the middle rounds against Thurman.  It’s possible that Thurman could have taken over the fight if he’d been able to throw more punches.

“Manny never gets tired in the gym, but he got tired in the middle rounds tonight,” Roach said to AFP. “I was keeping a close eye on it. But Manny is so fit he got through it and finished strong.”

Mayweather Promotions CEO Leonard Ellerbe said this week that Floyd Mayweather Jr. has “zero interest” in returning to the ring to face Pacquiao in a rematch. It’s unclear whether Mayweather will change his mind about that once he realizes the kind of money he’s walking away from. A rematch between the two fighters would make both guys a lot of money. Mayweather won’t make similar money facing obscure kick boxers. Further, he’s not had any takers from the MMA field since his win over Conor McGregor two years ago.

With Mayweather’s free spending ways, he might regret not taking the rematch with Pacquiao later. If Mayweather burns through his entire fortune, he’ll have wished he fought Manny again when he still had the chance. It is interesting to note that Mayweather attended the Pacquiao vs. Thurman fight last weekend. That’s a positive sign.

“I can’t see it,” Roach said. “Floyd’s retired and his people say there is no interest. But there will be other options.”