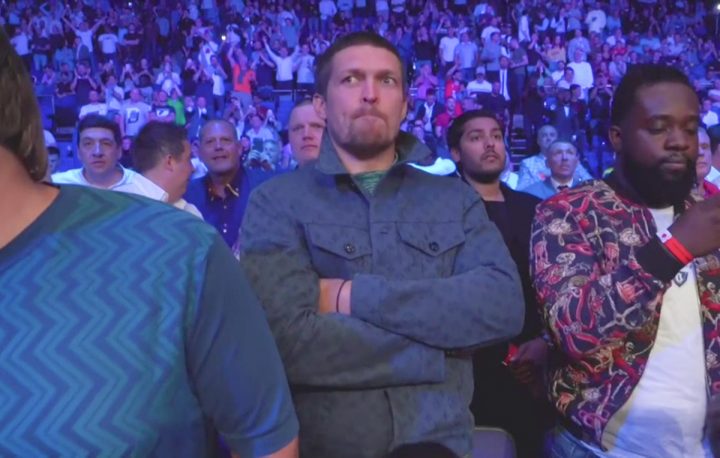 By Tim Royner:  Oleksander Usyk is pulling for Anthony Joshua to beat Andy Ruiz Jr. in their rematch, because he wants to fight him in 2020. Usyk (16-0, 12 KOs) believes that a match against former IBF/WBA/WBO heavyweight champion Joshua (22-1, 21 KOs) would be a tougher fight for him than a match against Ruiz Jr., who currently holds three of the four world titles in the weight class.

There still isn’t a set date for the rematch between Joshua and Ruiz Jr. AJ’s promoter Eddie Hearn of Matchroom Boxing says the date and venue for the fight will be announced this week. We’ll have to see if that’s true or not.

Usyk, 32, is still waiting to make his heavyweight debut against 38-year-old former world title challenger Carlos Takam. The two were supposed to fight each other last May, but Usyk suffered a bicep injury, and had to pull out of the contest.

Hearn is looking to reschedule the Takam fight for Usyk. In the meantime, the WBO has positioned Oleksandr at #1 with their organization at heavyweight. If everything works in Usyk’s favor, he’ll beat Takam this year, and then face the winner of the Joshua vs. Ruiz Jr. rematch. It would be a lot better for Joshua, Ruiz Jr. and Wilder if Usyk actually earned a world title shot rather than having it given to him by virtue of the World Boxing Organization ranking him at #1.

Beating up on the recently knocked out 38-year-old Takam is hardly a great way for Usyk to earn a title shot against whoever ends up with the WBO belt. The WBO’s practice of ranking former world champions at #1 is arguably a bad one, because it cheats fans from seeing those fighters earn shots. We saw that Demetrius Andrade getting ranked at #1 with the WBO at middleweight after previously holding the WBO 154 pound title.

Instead of Andrade fighting a quality guy for the WBO belt, he fought little known Walter Kautondokwa for the vacant WBO 160 pound title last October. In a perfect world, Usyk would need to beat someone like Dillian Whyte, Joe Joyce or Daniel Dubois to be rated #1 with the WBO. Unfortunately, the WBO isn’t requiring Usyk to fight anyone in order to be ranked #1. They just gave him the high ranking.

Ideally, Usyk wants to fight just once against Takam (36-5-1, 28 KOs) before he gets a fight against Joshua. Of course, if Joshua loses to Ruiz a second time, then Usyk can forget about it. Joshua isn’t going to waste time fighting Usyk at that point. The last thing Joshua would need to fight after losing a second fight to Ruiz Jr. would be a runner.

“Anthony Joshua at Wembley,” said Usyk to Sky Sports News. “I think it would be much harder for me to fight Joshua than Ruiz.

It’s not hard to understand why Usyk would want to fight Joshua over Ruiz. The 2012 Olympic gold medalist Usyk can probably make a lot more money fighting Joshua than he can Ruiz Jr., because the fight would likely take place in a large 90,000 seat stadium in the UK, and there would be a lot of pay-per-view buys from Sky Box Office.

The British boxing fans would love to see Joshua and Usyk mix it up. You can’t say the same thing about the American fans in wanting to see Usyk and Ruiz fight each other. Although there would be some interest in spots from the American boxing public in a Usyk vs. Ruiz fight, it wouldn’t be a lot.

Usyk isn’t well known by the casual boxing fans in the U.S, and his fighting style is less than crowd pleasing. He’s more of a Tyson Fury type of fighter than a slugger, and that limits amount of interest one of his fights will generate. Usyk is a finesse type of fighter, who uses an amateur style of jabbing and moving to win his fights. It takes a special type of fans that likes watching that style to appreciate Usyk. The American boxing fans would likely fall asleep watching Usyk and Ruiz fight. It wouldn’t sell, and likely would bring in poor subscription rates on DAZN.

“I was asked the question ‘whom would I like to fight’ and of course I named the three best heavyweights today in the division,” Usyk said. “If you want to be the best, you have to fight the best and these guys today are the best ones.”

Unless Usyk winds up with one of the titles, he’s going to be ignored by Deontay Wilder, because he brings nothing to the table in terms of boxing fans. Wilder gains nothing from fighting Usyk. The guys that will make Wilder money is Tyson Fury, Joshua and Ruiz.

Hearn sometimes does well in signing fighters, but he strikes out at times in inking defensive guys. We’ve seen that recently with Hearn signing WBO middleweight champion Demetrius Andrade, who looked poor recently in his win over Maciej Sulecki. Usyk might be another one unless he changes his fighting style to be more offensive-minded, and less of a pure defensive guy that we’ve seen in the past. His recent wins over Tony Bellew, Murat Gassiev and Mairis Briedis were boring fights.

Usyk is going to need to raise his game for him to beat any of the top heavyweights. The way that Usyk performed in his last fight against former WBC cruiserweight champion Tony Bellew last November, he’ll lose to Joshua, Wilder, and Fury. Bellew, 36, was beating Usyk on two of the three judges’ scorecards at the time that he was stopped in the eighth. The judges had Tony up by the scores 67-66, 68-65, and 67-67. In the eighth, Bellew gassed out and was stopped. If not for Bellew gassing, he probably would have won the fight, because he had the better hand speed and punching power. He was catching Usyk with shots the entire fight, and he had him looking scared.


« Pacquiao rates win over Thurman among the best of his career

Spence: Porter will raise the white towel of surrender »