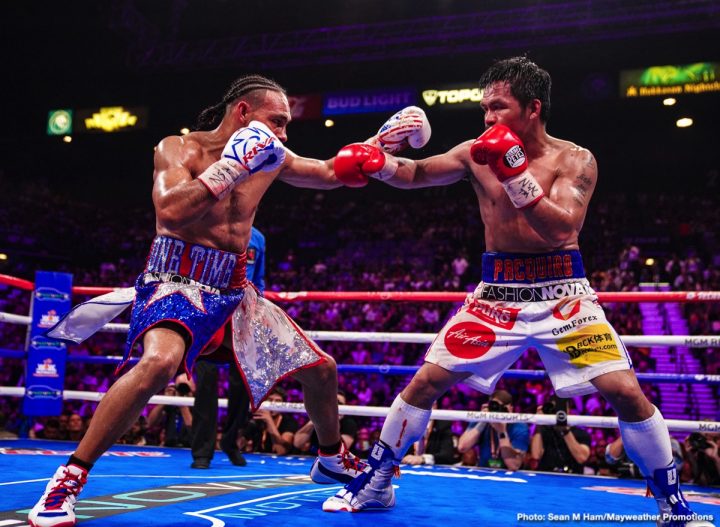 By Charles Brun: British promoter Eddie Hearn says some people think Manny Pacquiao is a drug cheat, and he would like to see him sign up for VADA testing in order to “quash” their speculation about him. The 40-year-old Filipino star beat father time last Saturday night in defeating previously unbeaten Keith Thurman to snatch his WBA Super World welterweight title from him at the MGM Grand Garden Arena in Las Vegas, Nevada .

It was an impressive performance by the eight division world champion Pacquiao (62-7-2, 39 KOs), who knocked Thurman down in round one, and mostly dominated him the rest of the way.

“Amazing really,” said Hearn about Pacquiao’s win over Thurman last Saturday. “Manny Pacquiao is getting older, but he’s getting faster, stronger and better and bigger. So yeah, amazing. He’s obviously training hard, isn’t he? When a guy has never failed a drug test, you can’t start accusing Manny Pacquiao of being a drug cheat. But there’s a lot of speculation, and there has been over the years around that. So if there’s speculation, why would you not just sign up with VADA? There’s an easy way to just quash any speculation, any rumors, any finger pointing, and that’s to say, ‘Look, guys, I’m signed to VADA for 14 weeks, VADA testing for my whole camp,'” said Hearn.

According to Pacquiao’s publicist Fred Sternburg, Pacquiao was tested by VADA both during training camp and post-fight following his incredible win over Thurman.

“The Nevada Commission hired VADA to test both fighters during training camp and post-fight in dressing room,” said Sternburg on Twitter on Monday.

“I’m not saying Manny Pacquiao is cheating,” said Hearn quickly. “I’m saying people think he is. So surely for your own credibility, you would just sign up for VADA testing. But he is a pound-for-pound fighter; he is a legend. For me, I hope he’s never been near a performance enhancing drug. I will be surprised if he hasn’t. Maybe he’s a freak of nature, and he’s a genius. But to help Manny Pacquiao help quash all that finger pointing, just do VADA testing. But he’s a talent.

You can’t just say that’s because he’s doing performance enhancing drugs. I think that’s harsh on Manny. He’s never failed a drug test, but he’s never really been tested in a way that all boxers should be tested. This isn’t just about Manny Pacquiao. It’s about all boxers. If there’s not testing for all championship fights, it’s a f—king disgrace,” said Hearn.

It’s good to know Pacquiao was tested by VADA for the Thurman fight, because they can’t take credit away from him for his fine win. As Hearn said, Pacquiao might be a freak of nature with the way he’s able to still fight at an incredible level at 40. 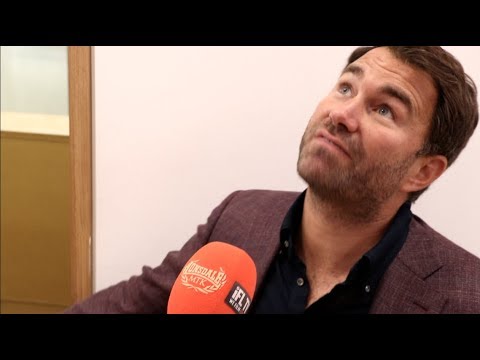 Pacquiao rates win over Thurman among the best of his career »