Pacquiao focusing on speed ahead of Thurman clash 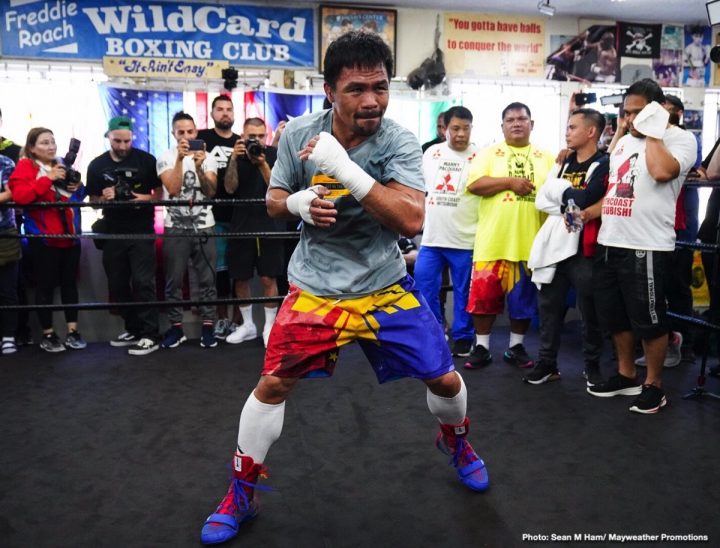 By Raj Parmar: With less than a week to go before his welterweight championship fight with Keith Thurman, Manny Pacquiao has revealed that he has gone back to a training regimen from his younger days. Speaking with Forbes, he has stated that he has focused on mainly speed during this training camp.

In addition to his hand speed, Manny has spent extra time on head movement and footwork. There is no doubt that while he is training extremely hard for this fight, the reality still is that the 40 year old legend will be will facing a hard-hitting undefeated champion who is ten years younger than him.

Pacquiao however is not the only one feeling confident about taking down Thurman. After opening up as the betting underdog, Manny is now the betting favorite as money has poured in from fans on his behalf. Manny and his team also feel that a vintage Pacquiao performance is on its way on July 20 along with many of his fans.

Manny stated that the upcoming match with Thurman reminds him of his prior fight with Ricky Hatton, Jesse Vargas and Antonio Margarito. Thurman is not very similar to any of those fighters therefore Manny may be referring to his mindset and training when going into those fights.

Hatton was brutally knocked out by Pacquiao and Margarito received a career changing eye injury from Manny’s punches. Manny may be looking to do similar damage to Thurman who he feels has trash talked way too much leading up to the fight,

It has been brought up in boxing circles that Manny feels out of the welterweight champions of Thurman, Errol Spence, Terence Crawford and Shawn Porter that Thurman may be the most vulnerable of the bunch. Thurman has been coming off a long layoff due to injury and did not look very good in his last fight against Josesito Lopez.

With Manny focusing on speed and movement, he will be looking to capitalize on Thurman’s ring rust and attain another big win on his record.