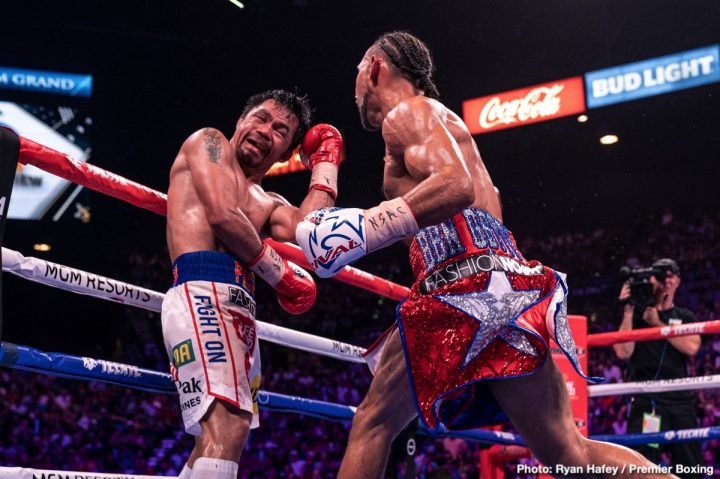 “Yes, I feel he does but the thing is those are really, really hard fights,” said Roach to Fighthub when asked if Pacquiao has enough left to take on the likes of Crawford and Spence. “We have nobody in mind right now. We know those guys are out there, yes. And we know we want to be the best in this division, and we’re not just fighting for fun, you know? So if like Mayweather comes around, great. But if he doesn’t, Spence, ‘Bud’ Crawford, those guys, I mean young guys doing really well and very, very tough fights. But we have to really, really sit down, everything settles, and make a good decision of who’s next.”

Pacquiao could be risking suffering a knockout loss to those two fighters if he chooses to face them. It might be better for Pacquiao to look in another direction towards a fight with Amir Khan, and then possibly Floyd Mayweather Jr. if he comes out of retirement.  Pacquiao no longer has anything to prove after 24 years as a pro, and it might be a good time for him to bow out. An easy payday against Khan would obviously help cushion Manny’s retirement years. Mayweather might suddenly show interest in fighting Pacquiao if he chooses to retire now. That’s easily Mayweaather’s best shot at making huge money in a winnable fight against a top boxer.

Roach says Thurman was hurt in the first round by Pacquiao

“Oh no, he was definitely hurt,” said Roach in talking about Thurman being dropped by Pacquiao in round one last Saturday night. “That was a good knockdown, hurt him badly, and almost finished him in that round actually. But I said ‘the old Manny Pacquiao’s back!’ I’m really happy about that.”

Thurman looked hurt in the first round. The way that Pacquiao went on the attack after dropping Thurman, it put him in a situation where he wasn’t given time to recover.  Thurman showed a lot of ability in making it out of the round without getting dropped a second time, because he was under serious fire from Pacquiao after being dropped. As far as Pacquiao being the “Old” Manny, that’s not the case. That’s wishful thinking on Roach’s part. Pacquiao was in there with a guy that is 30 going on 40 in Thurman, who is nowhere near the same fighter he was years ago.

“He was but the thing is he ran pretty good,” said Roach. “He stayed away and that’s why I call that a two-point round because he ran for at least two minutes after being hurt by that body shot, but those things happen.”

Roach is right about Pacquiao deserving a two point round in the 10th after hurting Thurman with a body shot. It was obvious from the shot that Pacquiao landed to the midsection of Thurman, that he had him hurt badly. The way that Thurman was forced to run for the last two minutes of the round to keep from getting knocked out makes it clear that he was in trouble. The judges should have taken that into account when they scored the 10th round.

“Not sure how they got that but the thing is, judges are judges and if you ask them why and so forth, they won’t give you an answer,” said Roach about the one judge that scored it for Thurman 114-113. 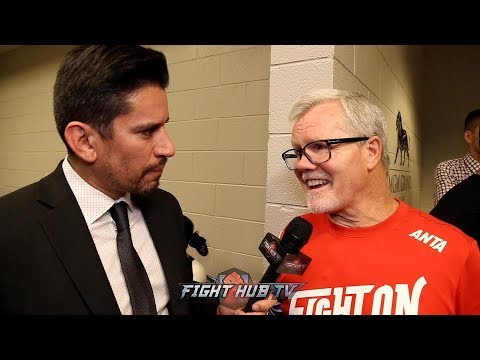