By Trevor McIntyre: Heavyweights Daniel Dubois, Nathan Gorman, Bryant Jennings and Joe Joyce weighed on Friday for their fights this Saturday night on BT Sport at the O2 Arena in London, England. The 21-year-old Dubois (11-0, 10 KOs) weighed in at 239 pounds, and will be giving away 17 pounds to the 256 pound Gorman (16-0, 11 KOs).

Dubois is the favorite to win on Saturday night. The two will be battling for the vacant British heavyweight title. Normally there’s not much interest from casual boxing fans for fights involving the British heavyweight title, but in this case it’s interesting because these are two good fighters. The British strap is stepping stone to the winner of the fight before they go after world honors.

There’s a possibility the winner of the Dubois-Gorman fight could face Joyce, if he wins on Saturday against Jennings.

Gorman’s weight is the highest in the last two years since his fight against Gogita Gorgiladze in February 2017. Nathan weighed in at 258 pounds for that match. Gorman has gained a little bit of muscle weight for the Dubois fight, which would account for extra pounds. 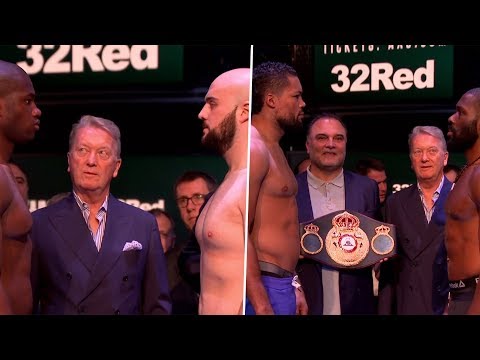 Undefeated 2016 Olympic super heavyweight silver medalist Joe Joyce (9-0, 9 KOs) weighed in at 256 pounds, and looked in great shape for his 12 round fight against former world title challenger Bryant Jennings (23-4, 14 KOs). The American fighter weighed in at 226 pounds, and will be giving away a massive 30 pounds to the 6’6″ Joyce. That doesn’t mean that Jennings will lose, because he proved a year ago that he can beat a heavyweight with a big size advantage over him in his fight against Alexander Dimitrenko.

Jennings weighed in at 225 pounds to the 6’7″ Dimitrenko’s 257 pounds. The fight was a mismatch with Jennings stopping Dimitrenko in the ninth round. Jennings gave former IBF/WBA/WBO champion Wladimir Klitschko problems four years ago in losing to him by a closer than expected 12 round unanimous decision in April 2015. Wladimir had a lot more hand speed, and technical boxing skills than what Joyce will be bringing to the ring on Saturday night against Jennings.

Joyce wants a world title shot within in the next 12 months, but Jennings stands in his way blocking him from moving forward. For Joyce to be considered as having the potential of capturing a world title, he’ll need to shine against the 34-year-old Jennings on Saturday night. If Joyce struggles to win, then it’ll be pointless to consider him as a future world champion.

A loss for Joyce would be devastating for him, as it would show that he lacks the talent at the world level to capture a title. There are already plenty of doubters out there that view Joyce as too slow, and too old to beat the top dogs in the division. A loss to Jennings on Saturday night will show that the critics were correct in their prediction of Joyce’s future.


« Joyce vs. Jennings: Bryant won’t lay down for Joe