Joyce vs. Jennings: Bryant won’t lay down for Joe 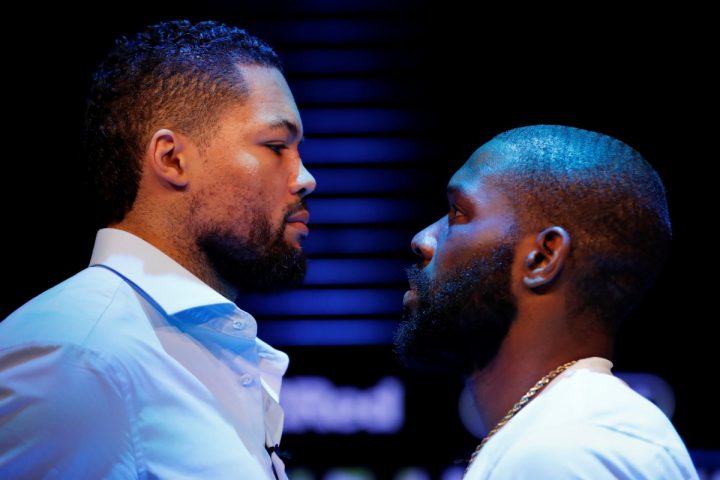 By Kenneth Friedman: Former world title challenger Bryant Jennings says he’s not coming into this fight tonight against Joe Joyce to roll over and let him win in their 12 round co-feature fight on the Daniel Dubois vs. Nathan Gorman card on BT Sport and ESPN+ at the O2 Arena in London, England.

Jennings, 34, plans on using his experience, quickness and mobility to send the 33-year-old Joyce down to his first career defeat in front of his loyal boxing fans at the O2.

Joyce vs. Jennings will be streamed live on ESPN+ in the United States.

Jennings was selected as the B-side opponent for Joyce to get a sure thing win against, but he plans on showing that they made a mistake in picking him. They shouldn’t have chosen him out, because he feels he’s got too much talent for a slow, plodder heavyweight like Joyce to beat him.

It’s hard for some boxing fans to believe that Jennings and Joyce are close to the same age, because the two of them are so far apart in experience. The New Yorker Jennings started his pro career nine years ago in 2010, and he’s already shared the ring with a number of talented heavyweight. Bryant lost to former IBF/WBA/WBO champion Wladimir Klitschko in 2014 in a competitive fight.

Jennings refuses to lay down

“It isn’t in my DNA to lay down. That is something I can’t comprehend,” said Jennings. To calculate the fact I am here to lay down they have got it wrong. His trainer Adam Booth has a thing with me and tried with Mike Perez but couldn’t. I won that fight. Joe’s trainer Adam and myself have history from that. I expect us both to bring our best,” said Jennings.

Jennings beat Mike Perez by a 12 round split decision in July 2014 in an upset victory. Perez came into the fight with Jennings having recently fought Carlos Takam and Magomed Abdusalamov. That was easily the prime of Perez’s boxing career, and yet Jennings looked great in beating him while he was at his best.

This is an important fight for Jennings’ career. He cannot afford to lose this fight if he wants to stay relevant in the division, and get another title shot.  Up until his last fight against Oscar Rivas, which Jennings lost by a 12th round knockout,he had a five fight winning streak going for him. At the time of the stoppage, Jennings was up on the cards, and on his way to beating Rivas. He got careless and allowed Rivas to land a big shot. In hindsight, Jennings should have boxed in the final round.

Jennings: Anything can happen

“Joe pummels people but you could have pummel v pummel and if it’s gonna be rock ’n sock robot okay,” said Jennings. “Don’t ignore the possibility of anything happening. You can be almost chilling and suddenly over.”

Joyce was getting hit cleanly in his last fight by 42-year-old Alexander Ustinov last May, and there were a few moments where boxing fans didn’t know who would emerge as the winner. Wht may have saved Joyce is the fact that Ustinov (34-4, 25 KOs) quickly ran out of gas right away. Joyce wasn’t pushing a super fast pace against him Ustinov, but he still wore him down quickly. Ustinov lacked the gas tank for him to fight in a back and forth war in which he would be required to defend himself.

Jennings has a big advantage in experience over Joyce. Here are the top fighters Jennings has fought as a pro:

Jennings hasn’t been brought along slowly by his handlers, as you can see. He’s been in with a number of talented fighters during his career, and he’s quite a resume.

Here are the best opponents in Joyce’s pro resume:

There’s no comparison between Jennings and Joyce in the competition that they’ve faced. Jennings has been in with far better opposition during his career, but that doesn’t mean he’ll win. It could be a factor though if Jennings drags Joyce into the deeper waters where he’s not been before.

Joyce vs. Jennings winner moves on to bigger things

Joe’s promoters want him to fight for a world title in 2020, but he needs to get past Jennings tonight. If Joyce loses the fight tonight, he can forget about challenging WBC heavyweight champion Deontay Wilder or IBF/WBA/WBO champion Andy Ruiz Jr.


« Derevyanchenko expects Canelo to avoid him, wonders if GGG will do the same