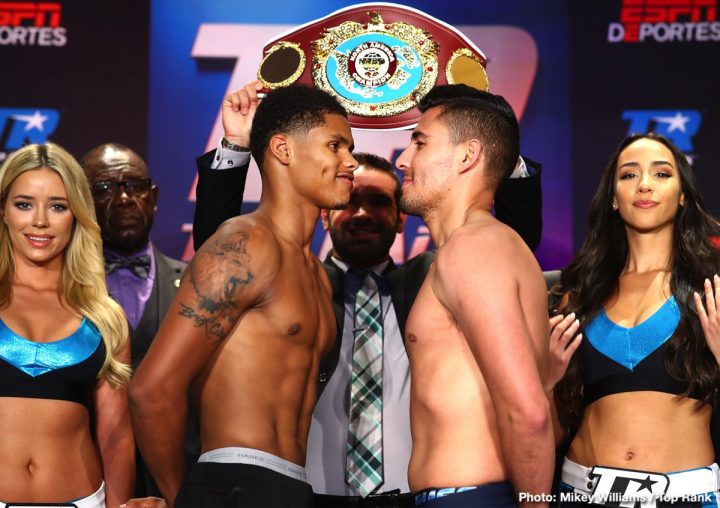 By Dan Ambrose: Undefeated Shakur Stevenson (11-0, 6 KOs) will be making his homecoming tonight against Alberto Guevara (27-4, 12 KOs)  in a fight scheduled for 10 rounds on ESPN at the Prudential Center in Newark, New Jersey. The card starts at 10:30 p.m. ET on ESPN.

Guevara, 28, isn’t expected to give Stevenson any problems tonight. This is more of a showcase fight for Stevenson to shine in front of his home boxing fans in Newark. In fact, Guevara stands no chance of winning this fight. He’s coming off of a one-sided 10 round unanimous decision to Hugo Ruiz (39-5, 33 KOs) last January. Guevara is more of a journeyman level fighter than a true contender. This is a step down for Stevenson from his last fight against Christopher Diaz, who he easily beat by a 10 round decision last April.

This is the same Ruiz that WBA Super World super featherweight champion Gervonta ‘Tank’ Davis knocked out in the first round last February. So we’re talking about an ultra-easy mark for Stevenson to fight tonight. Stevenson’s promoters at Top Rank are going to need to take the training wheels off of him soon. This fight isn’t going to prepare Stevenson to challenge Oscar Valdez. It’s a waste of time for Stevenson.

Stevenson, ranked #1 with the World Boxing Organization, he’s trying to get a title shot against WBO 126 pound champion Oscar Valdez. That’s going to be a tough fight for Stevenson, because Valdez is a huge puncher, and a two-time Olympian. The 22-year-old Stevenson might not be ready for that kind of a step up

Is it too soon for Stevenson to fight for a world title?

We’re going to find out soon if Stevenson is ready to take on a tough world champion in Valdez. It might be a good idea for Top Rank to position Stevenson to face one of the other bantamweight champions like IBF champ Josh Warrington or WBA champion Leo Santa Cruz. Those are guys that are more beatable at this point than Valdez.  Stevenson is still growing, and he might not be ready to fight Valdez at this early juncture of his career.

Stevenson will easily win this fight by a one-sided decision. Given how badly Guevara lost his last fight to Hugo Ruiz, we might see a stoppage for Stevenson.

In undercard action, Joshua Greer Jr.  (20-1-1, 12 KOs) will be fighting Nikolai Potapov (20-1-1, 11 KOs) in a IBF bantamweight title eliminator in the co-feature bout on the card. The winner of the fight will be the mandatory to IBF champion Naoya Inoue.


« Vladimir Shishkin vs. DeAndre Ware on August 23 on Showtime