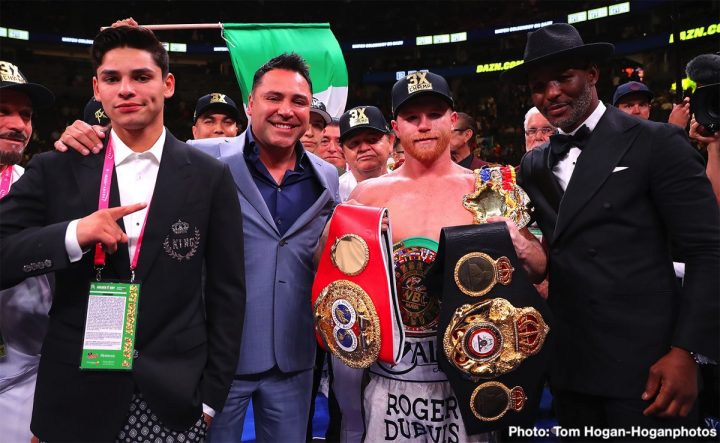 By Barry Holbrook: Saul Canelo Alvarez and his promoters at Golden Boy Promotions have been given an extension by IBF mandatory Sergiy Derevyanchenko’s manager Keith Connolly from Friday to Monday for the deadline for the Mexican star to agree to a deal to defend his IBF middleweight title, according to Dan Rafael.

Canelo Alvarez needs to defend his IBF 160 pound title against Derevyanchenko (13-1, 10 KOs) by the fall. If he chooses not to make the defense, then he either can vacate the belt or have the International Boxing Federation to strip him of his title.

Canelo wants to unify the middleweight division, but it would require him to defend his IBF title against Derevyanchenko, and then beat WBO middleweight champion Demetrius Andrade. Neither of those fights will bring in a lot of subscriptions for DAZN, who is paying Canelo huge money.

DAZN needs to approve Derevyanchenko as an opponent for Canelo

Derevyanchenko, 33, still needs to be approved by DAZN as a suitable opponent for Canelo (52-1-2, 35 KOs) to face. DAZN wants a commitment from Canelo that he’ll fight Gennady Golovkin in a trilogy fight next May. DAZN has a high degree of interest in showing the Canelo vs. GGG trilogy fight. However, it’s unclear whether Canelo is willing to agree to make that fight happen that soon. It’s rumored that Canelo isn’t happy with GGG for all the trash talking he did before their rematch, and he doesn’t want to help him out by giving him another big payday.

If Canelo faces GGG in a trilogy fight, he would likely have listen to a lot of his trash talk for months before they face each other. But not fighting GGG, Canelo doesn’t need the constant verbal incoming criticism. From Canelo’s point of view, it’s understandable why he wouldn’t want to throw Golovkin a bone by fighting him again.

GGG could face Munguia next

Golovkin (39-1, 35 KOs) could be facing Jaime Munguia next as a warm-up before a third fight with Canelo. Golovkin vs. Munguia isn’t a great fight, but it’s one that GGG is capable of winning. Canelo wants him to face WBO middleweight champion Demetrius Andrade, but he’s not show any signs of agreeing to do that. It would make things easy for Golovkin if he agreed to fight the southpaw Andrade, and then beat him to take his WBO title. The 22-year-old Munguia is so much younger, and less experienced than Golovkin. It would be perceived as an unfair fight if Golovkin takes it.

Andrade would be a really hard fight for the 37-year-old Golovkin, and he could lose. If Canelo digs in his heels and refuses to fight Golovkin in May of 2020, then DAZN will need to approve someone else for him to face. Golovkin should take the fight with Andrade to earn the third fight with Canelo, because his last match against Steve Rolls was a disappointment.

“Keith Connolly, who is Sergey Derevyanchenko’s manager and here in Dallas, told ESPN that their side has agreed to extend the deadline from Friday afternoon to Monday for middleweight champion Canelo Alvarez and his promoter, Golden Boy, to agree to a deal to face Derevyanchenko this fall in a mandatory defense or he will have to give up the IBF belt,” said Rafael at ESPN.com.

It’s in Derevyanchenko’s best interest to fight Canelo for his IBF title rather than him being stripped of the belt, and then having to fight someone like Golovkin or Kamil Szeremeta. GGG would be a tough fight for Derevyanchenko, and he would likely not make as much money fighting him. Szeremeta is a completely unknown fighter, and there wouldn’t be much to gain for Derevyanchenko fighting him for the IBF middleweight title.

Even if Derevyanchenko beat Szeremeta, there wouldn’t be much news about the outcome, and it would make Sergiy a paper champion. If Derevyanchenko gets a hold of the IBF belt, he’s reportedly going to fight fellow Premier Boxing Champions fighter WBC champ Jermall Charlo in a unification fight. Derevyanchenko is much better off fighting Canelo. If he doesn’t choose to fight him, then Golovkin is the next best guy for Derevyanchenko to face for  the belt. If Canelo chooses to pass on the Derevyanchenko fight, it’s predictable that Golovkin will do the same thing.

Alvarez vs. Kovalev possible if not Derevyancheno fight

Canelo could be challenging WBO light heavyweight champion Sergey Kovalev before the end of the year. If Canelo wins the WBO belt, it would open up an entirely new division for him to find compelling fights that would interest boxing fans. Right now, the 175 pound division has five good names for Canelo to fight in Kovalev, Artur Beterbiev, Dmitry Bivol, Marcus Browne, Badou Jack and Oleksandr Gvozdyk. In contrast, the 160 pound division only has two good fights for Canelo in Golovkin and Jermall Charlo. The 168 pound division has four interesting fights in Callum Smith, Billy Joe Saunders, David Benavidez and Caleb Plant.

Canelo already proved that he can beat a light heavyweight with his win over Daniel Jacobs last May. Jacobs is arguably a 175 pound fighter, who melts down to fight at middleweight. The Golden Boy star showed that he has enough talent and size to beat Jacobs, so it’s possible he can beat some or all of the top light heavyweights as well.

The streaming giant DAZN recently inked a 11-fight, 5-year, $365 million contact with Canelo to fight on their network. They’ve reportedly approved two fighters thus far for Canelo to fight: Gennady Golovkin and Sergey Kovalev. Those two are household names in the U.S with many casual and hardcore boxing fans.

Derevyanchenko doesn’t fit that category, as he’s only known by the hardcore fans in the United States. What hurts his case for being approved by DAZN is the fact that he recently lost to a guy that Canelo just beat in Daniel Jacobs. It would look bad if Canelo faces one of Jacobs’ victims for his next fight rather than someone that the are eager to see him fighting.