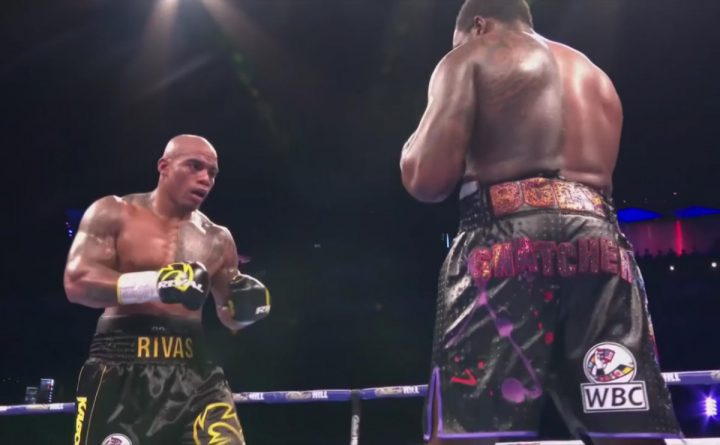 By Tim Royner:  The WBC are asking for more information from the British Boxing Board of Control about heavyweight Dillian Whyte’s reported positive test for a banned substance before his fight last Saturday night against Oscar Rivas. As of now, the WBC are waiting for the BBBofC to provide more information on Whyte’s recent test.

It’s possible that if Whyte’ s B-sample comes up negative, this will all be nothing. Whyte would likely remain the WBC mandatory, and he would then fight for a world title in 2020.

According to the WBC, they have the power to NOT recognize the result of Whyte’s recent 12 round unanimous decision victory over Rivas (26-1, 18 KOs) in their WBC title eliminator. Whyte would lose his mandatory status at that point, and it would be up to the World Boxing Council if they want to elevate Rivas, 32, to that position.

The WBC could play it any number of ways. Here are some possible things the WBC could do if they strip Whyte:

WBC in communication with BBBofC

“Here’s what [the] wbcmoro told…on the Dillian Whyte situation: “We have initiated conversation with the British Boxing Board for full communication of what occurred, and once we have that information, we will initiate due process. “I don’t want to speculate right now, but we are empowered to rule we are not recognizing this as a result that qualifies the winner for a mandatory title fight,” explained wbcmoro on Dillian Whyte,” said Lance Pugmire @pugboxing.

Whyte was already cleared by the British Boxing Board of Control and UKAD before his fight with Rivas last weekend. He met with a National Anti-Doping panel for them to ask him questions. Following the meeting, Whyte was subsequently cleared to fight against Rivas. Whyte’s B-sample still hasn’t been tested as of yet, and that’s what they’re waiting on. Once the results from that test are learned by the WBC, they’ll be able to proceed to make a ruling.

It’s just sad. This guy [Whyte] had been crying, talking about 600 days he hadn’t been mandatory, and finally he got the opportunity [against Rivas]. He had four opportunities before. He got an official opportunity this time, and what did he do? Shame on you,” said Wilder.

WBC heavyweight champion Deontay Wilder feels strongly about Whyte’s case, because he could face him in 2020 if he’s cleared. There’s no love lost between the to heavyweights, because Whyte has been complaining about not being given a title shot by the WBC champion. Wilder in turn views Whyte as a “crybaby” complainer, who has failed to take advantage of the opportunities that were given to him in the past to earn a title shot against him. One of those opportunities came last year when the WBC ordered Whyte to face Luis Ortiz in a secondary title eliminator. Whyte instead fought Dereck Chisora.

“They need to start with the banning part of it. For starters, it needs to be more than six months,” said Wilder. “That’s just normal protocols for a fighter. A fighter goes from three to six months without fighting normally. They need to be banned between six years and eight years. They need to get something special the second time. The more you do it, the higher it goes. And then you do it three times, then you’re banned for life. They need to get some rules and regulations done right now.

Deontay’s call for a six to eight-year ban for fighters that turn up positive a second time isn’t realistic, because that would essentially mean a lifetime ban. If a fighter is banned for that many years, then his or her career would effectively be over. A lifetime ban isn’t realistic either in boxing. It’s feasible that any agency would hand down a life time ban, and even if they did, a fighter could circumvent that ruling by going out of the country to fight.

It’s getting out of hand right now. There’s too many lives being taken in the ring. All these guys taking all these drugs just to advance their careers, because they’re too cowardly to do it by themselves. They need help, and it’s sad. It’s sickening. When his B-test comes back positive, because most times when the A-test is positive, the B-test is almost always come back positive, yes. Then they’re going to be in for the biggest lawsuit of their lives,” said Wilder about Whyte.

If Whyte’s B-sample comes up positive, UKAD and British Boxing Board of Control will need to decide what direction they want to go in. As one would guess, there will be a lot of eyes on both agencies by boxing fans. The WBC could potentially make their own move apart from what the BBBofC and UKAD does.

“We just had a fighter… die in the ring (Maxim Dadashev) because of taking too many blow(s) to the head and you have idiots like Dillian Whyte want to CHEAT just to come up in his career because he’s not good enough to do it alone,” Wilder on his social media site.